Earlier in the week the plan was to do some ringing in the reedbed at the Obs today, but as the week wore on, the forecast changed, and it was too windy. In fact, it was far too windy, not blowing a hooley, but too windy for ringing.

Instead, I went to the Point to do some seawatching over the incoming tide. I like seawatching, I always have, but it's not every birders cup of tea. By 5:30 a.m. I was stood in front of the tower with three oktas cloud cover, and a moderate westerly wind.

One of the reasons that I like seawatching so much, is that air of expectation, something unusual might come past, and it is that air of expectation that nourishes you when it is quiet, which is often the case! The other thing, is that you are seeing birds that you don't normally see, birds that you need to put time and effort in to see. And it's the environment that they occupy, the sea is almost like another dimension, often inhospitable and savage, but these magical creatures have mastered it. You can stand on a wild and wind-swept shore, or on a shore firmly anchored in our modern and sometimes mundane world, and look over a vast area of wilderness. For to me, the sea is a kind of wilderness that we can access from our far from wild lives.

And there's the changing moods that a change in the weather brings. This morning for example it started off fairly quiet and clear, and then I could see a line of squally showers stacked up in the mouth of Morecambe Bay, that raced inwards and shoreward, and suddenly this vast open area was closed down, as though a blanket of murk had been cast from shore to shore. Droplets of rain started to appear on my telescope lens, and I had pull out the rain guard to try and keep it dry. And then it was clear, the dreich blanket had been lifted, the sun was coming out again, and the outline of the Lakeland fells reappeared. Magic.

I didn't take any photos this morning, so below I have posted a few pictures taken from more or less the same spot at different times of the year, that I think reflect the changing moods of this salty wilderness. 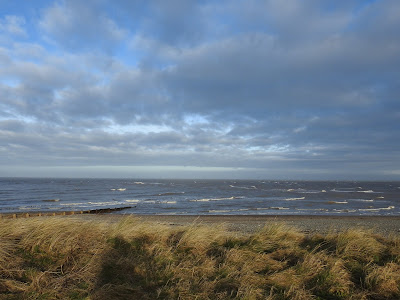 Don't foregt to 'click' the pics to enjoy a larger view 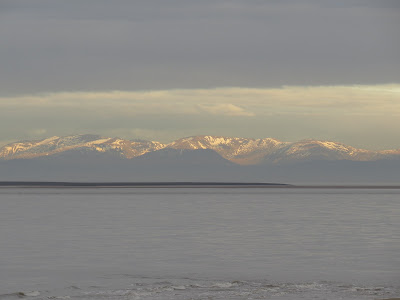 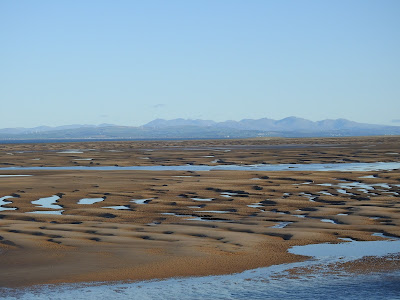 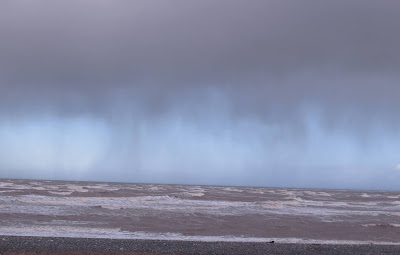 There were three highlights this morning; a summer plumaged Mediterranean Gull, a dark morph Arctic Skua chasing terns and the 'coastal pecker' alluded to in my Blog title. I had just taken my eye away from the eyepiece of my telescope, when out of the corner of my eye I caught a glimpse of a largeish black-and-white bird with a bouncing flight flying from right to left, and there it was a Great Spotted Woodpecker flying over the beach! It headed over the dunes, and I lost it behind the sandy peaks.

A number of Gannets were feeding in the inner bay, and they seemed to be feeding in a large feeding circuit; heading out west, and then returning east back in to the bay, and there was somewhere in the region of perhaps 60 birds in total. A range of ages could be detected from second calendar year birds, through to adults.

I had packed in before the tide had fully run in, so all I had in terms of waders were seven Curlews, 46 Oystercatchers, two Turnstones and a single Ringed Plover. The only vis I had were seven Swifts west.

It's going to be wet tomorrow, so a few beers beckon this evening, but I might get some ringing done Sunday morning, we'll see.
Posted by The Hairy Birder at 20:13

Enjoyed your blog Seumus, made up for not getting down to the sea today ourselves.