I had a long and very pleasant day in Bowland yesterday, on one of my client's farms, looking at the management of his hedges in the future. The forecast was for a decent morning this morning, good enough to do some ringing in the reedbed and scrub. I got all my gear together, charged my MP3 players and speakers, and all was well for a hopeful half decent morning.

However, just before bed I had a quick look at the BBC weather app and it was now showing rain coming in between 0800 and 0900; what?! I looked at the Met Office site, and all was well; light cloud with only a 10% chance of rain. I thought I would look at the XC weather site, and this was a half-way house between the two! So, which forecast to believe?

I decided to ignore the forecasts, get up in the morning and go anyway, as I had got all my gear together. I arrived on site at 0500 and got the nets up fairly quickly. There was full cloud cover with a light south-easterly wind, so far, so good. Then about 0700 the rain arrived, the thick blobby stuff, and I had to pack up. I suppose the BBC forecast was closest, as it said the rain would come in between 0800 and 0900, but it came in at 0700. The met Office were now saying something similar, and so was XC. So, which forecast? I'm not sure.

All I managed to ring before the rain came in were four birds as follows:

As I was putting the nets up, I could hear a Grasshopper Warbler 'reeling' away from some grassland and scrub on the far side of the scrape, and I could also hear the 'rattle' of a Lesser Whitethroat, close to where my nets were.

As always, the Starlings were late getting up, and when they did emerge from their reedbed roost they numbered somewhere in the region of 7,000 birds. I recorded very little else, and after I had taken the nets down, I gave the net rides a god 'hair cut' ready for the next session, and the next session might be as early as Friday.

I've only had one session with my garden moth trap in the past week, and I caught the following: 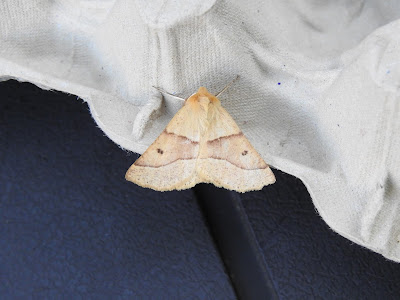 Fingers crossed that whichever forecast I use, 'they' get it right for Friday!
Posted by The Hairy Birder at 15:23