Saved By A Mega

There was a distinct Autumnal nip in the air yesterday morning when Ian and I met at the pools at 5:30 a.m. at the Obs to do some ringing. In fact, I nearly put my woolly hat on, but resisted! We were keen to do some ringing, because the recent period of wet weather meant that we hadn't ringed anything here since 24th June.

The nets went up quickly under 2 oktas cloud cover with a light southerly breeze. This southerly breeze picked up later, and became a bit of a nuisance as our net rides run north - south, so they became a little exposed to the increased wind.

On the whole it was a disappointing session because we only ringed nine birds, but we were saved by a mega in the form of a juvenile Treecreeper. Up until then we had ringed more Yellow-browed Warblers at the Obs than Treecreepers, but yesterday's Treecreeper made it three apiece. 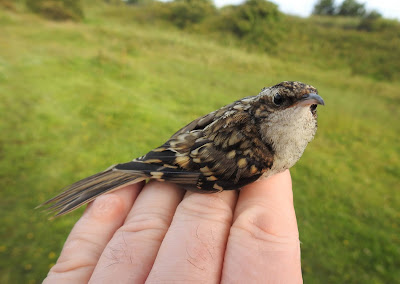 The nine ringed were as follows: 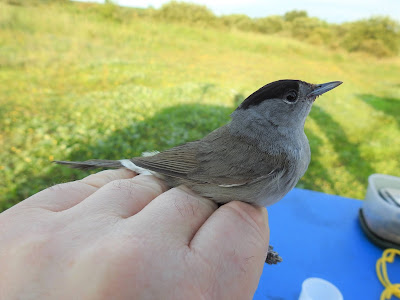 From a birding perspective, we observed very little else other than about 5,000 Starlings exiting the roost and three Swifts and a Sand Martin that fed over the scrape. 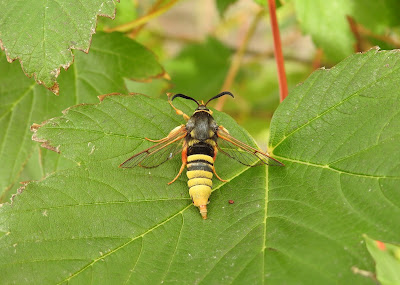 A good friend of mine, Graham (what Graham has forgotten about moths isn't worth knowing), asked whether I had been using the new pheromone lure, or whether I had just found it. I explained to Graham the circumstances of its occurrence and said that I thought Lunar Hornet Moths were associated with Willows, and that I had a number of Willows in my garden.

And to finish off what started as an unpromising day, that turned in to a day of megas and surprises, we now have a young Hedgehog coming to our 'hog' feeding station as well as a couple of adults. I wish you could see the smile on my face!
Posted by The Hairy Birder at 10:42