I'm Glad I Did

I nearly didn't go out yesterday morning, but I'm glad I did. Due to a recurring shoulder injury I only managed an hours sleep the night before, so when the alarm went off at 4:30 a.m. I nearly didn't bother. I'm not after any kind of sympathy, but I did wonder whether I would be able to manage with the pain. But when I opened the door, inhaled that autumnal air and could see the first fingers of dawn stretching across the sky, the pain melted away.

I headed to the reedbed at the Obs and under 2 oktas cloud cover, with a light north-westerly wind I had the nets up by 5:30 a.m. But it felt quiet. There were no 'tacks', 'tseeps' or 'hweets', and I began to think maybe I should have stayed in bed.

However, as the morning wore on it was obvious that there were birds around, and I ended up ringing a respectable 21 birds, and that was without putting up one of the 60 foot nets. The 21 birds were made up of: 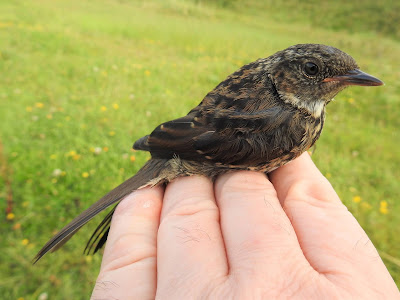 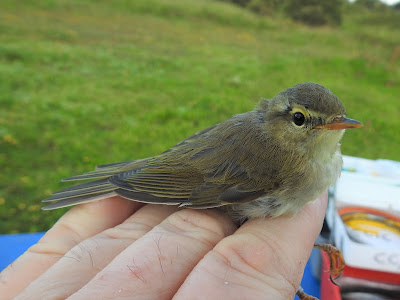 Either the Starlings got up earlier this week, or the numbers roosting had dropped, because I only counted about a thousand or so birds exiting the roost. A family party of juvenile Whitethroats were in the scrub close to where I park my car, but they didn't venture any further than this.

A calling Common Tern flying over carrying a small fish made it into my notebook, as did a Garden Warbler that was feeding alongside one of the net rides. A Great Spotted Woodpecker was noteworthy, as they aren't overly common in this area, mainly because of a lack of woodland.

I had a look on the pools on my way off the site and counted 30 Coots, four Moorhens, five Little Grebes, a Pochard and two Tufted Ducks.

It was a pleasure to be out, and in case you were wondering my shoulder is a lot better thank you. I might just have to sample some real ale pain killers from north of the border though this evening, just in case!
Posted by The Hairy Birder at 21:02