It blew at weekend, not storm force, but certainly close to a hooley, and I was out at first light both days at the Point. For that, I will give myself 10 out of 10 for effort, especially as it was my birthday on the Saturday, but there was no cigar; the cigar being a Leach's Petrel! I've seen hundreds of Leach's Petrels over the years of course, but I never tire of seeing these pelagic sprites. They are impressive birds, only the size of a House Martin, and yet they winter out in the south Atlantic! I've said it before, that I view the sea as the closest wilderness to our far from wild lives, and Leach's Petrels to me epitomise wildness.

Saturday dawned with a force 5 - 6 westerly wind, and six oktas cloud cover. A few waders were on the beach at high tide and these included 84 Oystercatchers, 105 Sanderlings and 50 Knots.

There was a movement of Gannets west, but they only numbered 13 birds heading out of the bay. Two Fulmars flying west was nice, with one a fair way out, but so obvious with that large white head, and long, straight wings. The other bird was closer in, and I had cracking views of it over some slack water between the shore and the shingle island.

Eight Pink-footed Geese battled southwest, a long way out, and they were the first Pinkies I have seen this Autumn. If you remember, I heard some last week, but didn't see them.

A summer plumaged Red-throated Diver was a stonker, but the best for me were the four Arctic Skuas that performed the full repertoire of Arctic Skua flight action. The first Arctic Skua I had, I picked it up harrying Sandwich Terns. It never ceases to amaze me, that a bird that weighs nearly twice as much as a Sandwich Tern is capable of out-flying it! The second Arctic Skua, was climbing high into the sky as it headed west, something you expect to see when they are heading east in to the bay in Spring, preparing for an over-land crossing to the North Sea. And the third and fourth Arctic Skuas, were actually heading in to the bay and flying low over the sea with a shearing action, not too dissimilar to a large Shearwater. 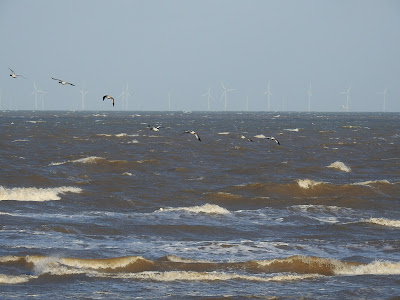 Even though it was windy, a few Meadow Pipits and a Grey Wagtail battled west.

Sunday dawned with full cloud cover with a force 6 west-southwesterly wind. The wind strength and direction was better, and it had blown all the day before and overnight, but the poor visibility in the inner bay bothered me, and after two hours of very little, I was right to be bothered.

From a sea-watching perspective, all I was rewarded with for two hours observation, was a Razorbill, eight Common Scoters, a single Arctic Skua heading out of the bay at a rate of knots, an Auk sp. and a Gannet. That was it! There were a few waders on the shore as the tide ran in including 48 Oystercatchers, three Curlews and 70 Sanderlings.

I had three Grey Wagtails this morning, but they were certainly off-passage, and not heading anywhere fast.

The forecast is looking good all week, and Gail and I are going to have a few days out in the great outdoors, and there's a chance of some ringing at the Obs mid-week.
Posted by The Hairy Birder at 20:21