Sunday and Monday saw me having back to back ringing sessions at the pools; Sunday with Alice, and Monday on my own. On Sunday we had 4 oktas cloud cover, with a light easterly wind, and on Monday I had clear skies with a light southeasterly. However, on both days the wind strength increased quite quickly, and affected our catching rate.

For ease, I have combined the ringing totals for both days below (recaptures in brackets): 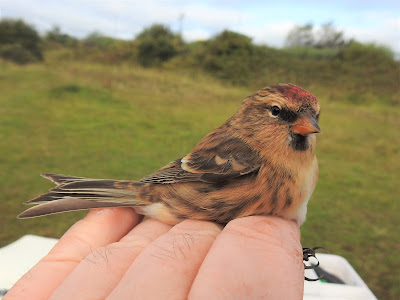 On both days there was some vis, and as always when you are ringing, you inevitably miss birds that are going over. For the vis totals I have done the same again, and amalgamated the totals for both days. It's not just me being lazy, but also it makes them look more impressive!

Raptors were thin on the ground with just a female Sparrowhawk on Sunday, and a Kestrel on Monday. A few Snipe are now starting to arrive and use the scrape, and over both days there was about nine. A couple of Cetti's Warblers called from the wet scrub, and Pink-footed Geese called, but remained unseen.

Starlings are still roosting, but numbers have now dropped to somewhere in the region of three thousand. And that just about sums up both days. It looks like it will be weekend before I am out again, and then for the fortnight after that I have cleared my diary so I can get out birding every day over those two weeks, weather permitting that is!