What Happened To The Cloud?

If you remember, in my previous post I said the forecast for Sunday night in to Monday morning was for some light cloud cover, and I was hoping for a few migrants in the morning. Well, the cloud didn't materialise and it was another clear, cold, migrant less morning at the Obs Monday morning. Another 'clear out' morning. I say another clear out morning, but there couldn't have been much to clear out!

Once again, Alice and I put the nets up in the reedbed and scrub at the Obs, and once again it 'felt' quiet i.e. nothing calling! 10,012 Starlings (that's an estimate of 10,000 and then twelve flew over!) exited the roost and that was really about all the interest we had. Oh, I forgot, two Great Spotted Woodpeckers flew east, probably moving from the water treatment works to feed in the gardens of some of the houses adjacent to the estuary. 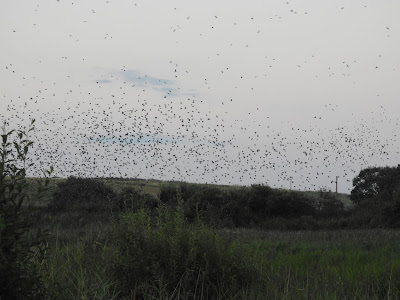 On the scrape were 36 Mallards and a male Tufted Duck, and a Redshank did a few circuits before deciding not to drop in, and headed back towards the river.

It was another four birds ringed this morning; a Reed Warbler, a Robin, a Greenfinch and a Wren. Four birds and three ring sizes!

Our ringing area is set within 7.4 ha of Phragmites reedbed, Willow scrub and open pools. As I have mentioned before, it is situated south of Fleetwood, and is on a peninsula bounded by the Wyre Estuary to the east, Liverpool Bay to the west and Morecambe Bay to the north. It is just 425 m to the estuary, and the north and west coast are 1.6 km and 2.3 km from the site respectively. So, you can see from this, that it is coastal in location, and it is also quite isolated from other similar habitat. This makes it very much of a migration site, and if there are no migrants around then we catch very little. Of course, there are breeding birds at the site including Sedge Warbler, Reed Warbler, Cetti's Warbler, Reed Bunting etc. The usual passerines that you would expect in such wetland habitat.

So, no excuses, but just a bit of a description of the site and an explanation as to why there can be very little, or no birds present, or lots of birds present. It's all down to the vagaries of migration, and that's why I have been desperate for a bit of cloud cover to drop some birds in!

I was available to go out again this morning (Tuesday) and I thought that if it was clear again, I wouldn't bother, because what could possibly be left after a clear out after a clear out! The forecast said cloud cover again, and that was backed up by all three (BBC, Met Office and XC) forecasts that I use, so at 0545 I was back at the ringing site. And you know what, you can probably guess, it was clear and cold again!

I knew it was going to be yet another quiet session, and I actually thought I would be lucky to get four birds, but four birds is what I did get. This time I ringed two stonking Grey Wagtails plus a Wren and a Blackcap. So, just four birds once again, but I was pleased with the Grey Wags. Up until the point where the Grey Wags made an appearance, I was wishing I hadn't bothered, but their gorgeous lemon-yellow underparts certainly brightened my morning. 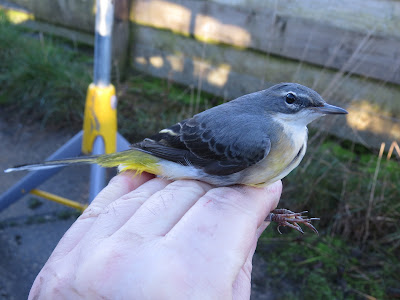 The Starlings exited their roost as usual, and numbers seemed similar to the ten thousand I have been writing in my notebook for a while, so ten thousand it was. On the scrape were 33 Mallards and a Mute Swan, and it would have been nice if the calling Greenshank I could hear out on the river had dropped in to feed, that's for another day hopefully.

There's a new-ish housing estate adjacent to the estuary, and a few pairs of breeding House Martins call it home. All morning a couple of birds were flying back and forth to feed over the pools, so I am guessing that they are a pair with a late brood of chicks to feed.

So, the cloud cover never materialised,and with that nor did any migrants, but as usual it was just pleasant to be out.
Posted by The Hairy Birder at 14:16