.........I would have put good money on Peter, Graham, Ian and I catching and 'leg-flagging' a few Turnstones this morning, but it wasn't to be. There has been good numbers all week at the feeding station and despite the high tides being fairly low, we decided to attempt a catch because of this. However, what we couldn't factor in was the disturbance from people walking their dogs just at the critical time as the Turnstones were approaching the catching area. Somebody would walk past and they would either fly or run off. Eventually we called it time as it just wasn't going to happen this morning.

We'll be trying again in a couple of weeks time when there will be a series of tides over 9 metres high. The weather is looking a bit rough for the next week; mild but with strong southwesterly winds. It could be good for a spot of winter seawatching mind you! 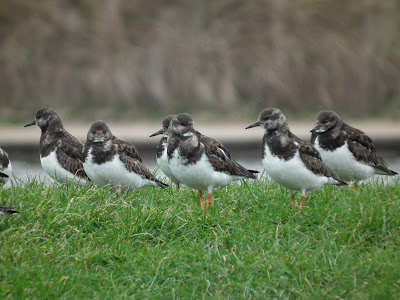