Yesterday morning I checked a Barn Owl and Kestrel box at my good friends Robert and Diana's farm. In the Barn Owl box were two chicks about two days old, so there could be a couple more eggs to hatch. The female Kestrel was in residence at the box and she was sat, presumably incubating eggs or brooding small young, so we didn't disturb her. I'll be back in ten days or so to hopefully ring the Barn Owl and Kestrel chicks. 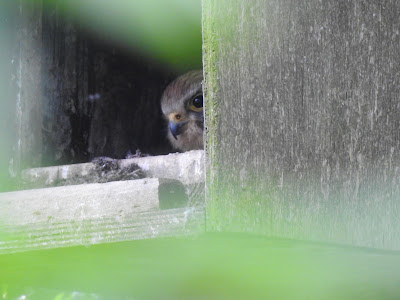 Highly zoomed picture of the Kestrel in her box

This morning as I was putting my ringing box away in my storage box in the garage I caught out of the corner of my eye what I thought was a Hornet resting on my tool bag! My first thought was "that's going to be interesting getting that beastie out of the garage"! Still thinking I was dealing with a Hornet I thought I would carefully lift my tool bag up, carry it outside, and release the Hornet from the confines of my garage. As I was slowly walking out of my garage with my tool bag at arms length as best as I could, I was pleased at how calm the Hornet was, and then I noticed its moth-like antenna and furry abdomen!

At that point I knew I had one of the Hornet Moths and could hardly contain my excitement as I have always wanted to see one! I ran into the house and grabbed my camera and 'Townsend and Waring'. I took a quick snap of it on my tool bag and then checked to see which Hornet Moth it was (there's only two) and it was Lunar Hornet Moth! 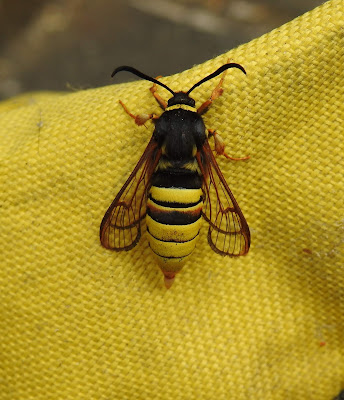 Lunar Hornet Moth on my tool bag (above) and vegetation
below 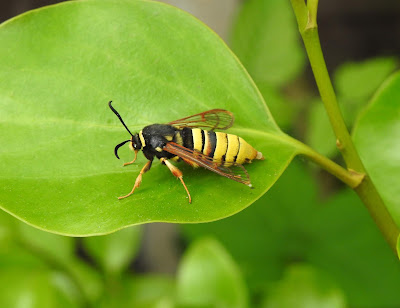 I then moved the stunning beast to some vegetation and took a few more pictures! It's not particularly rare, but they are seldom seen, so to have one in my garden was fantastic! The food plant of the caterpillars are sallows and willows, and I have a lot of willow in the garden. So this Lunar Hornet Moth certainly made my day!
Posted by The Hairy Birder at 19:43