Tuesday evening found Huw and Me at our good friends Diana and Robert's farm to hopefully ring a brood of Kestrels from a box that Robert put up on the edge of his woodland. We have ringed the Kestrel chicks from this box for the last two years, so fingers were crossed on Tuesday evening.

Prior to me going away on holiday we had checked the box and the female Kestrel was sitting, so we had high hopes that when I got back there would be chicks and that they would be big enough to ring. Huw went up to the box and there were three chicks, plus one egg. The chicks were probably somewhere in the region of 10-12 days old so there was no chance of the egg hatching. The three chicks were duly ringed and placed back in the box. 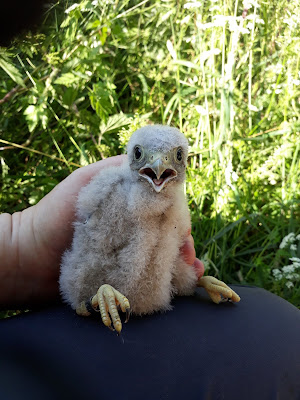 We headed up to the yard to check the Barn Owl box that Robert has up in the barn. We've ringed the Barn Owl chicks from this box for six years now.Prior to me going on holiday we had checked the box and there was just two small young, perhaps just 3 - 4 days old, and we did wonder whether there was some more yet to hatch. When we checked the box on Tuesday evening we found it empty!

It was obvious that the box had been predated, but by what? A few culprits sprang to mind with Jackdaw being top of the list. In the same barn as the Barn Owl box a pair of Jackdaws were nesting and they are more than capable of taking eggs or small chicks. Other possibilities could be Little or Tawny Owl, both of which are found on the farm. It's very sad as this might be this pair's only nesting attempt this year.
Posted by The Hairy Birder at 19:20