This morning Gail and I met Huw at our nest box scheme in the Hodder Valley in Bowland, to make our final visit of the year and ring the Pied Flycatcher chicks. 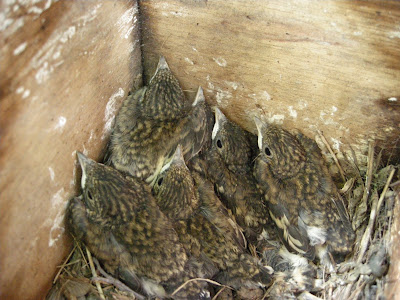 The first Pied Flycatcher box I checked was empty. "Strange" I thought, because six days earlier my note book entry read "7 young; naked and blind". Which basically means that they were too young to ring. I estimated that they were about two days old last Sunday (27th May), and on average Pied Flycatchers are 16 days in the nest. This would give an estimated fledging date, giving a day or two, of 10th June. This would mean that if they had fledged it would have been at least eight days early. The weather has been good this week, but even so could they have fledged so quickly?

The next box I checked should have had between eight and ten Blue Tit chicks, but it was empty. Again last Sunday my notebook read "8 eggs and 2 young naked and blind! So these Blue Tits were in the process of hatching and there is no way they could have fledged so soon.

What solved the mystery of these two broods was the fact that in each of the two boxes the nest itself was intact. Normally as the chicks grow and they become large and boisterous the nest gets flattened completely, and there is so sign of the nest cup left. In fact you can use this to check boxes later in the season to see if the young successfully fledged. So it was obvious that both these broods had been predated, but by what? My best guess would be that they were predated by a Weasel. Weasels are small enough to get through the hole in the box and can climb trees. I have observed this before at another site where we had several boxes predated by a rogue Weasel, and at this site we caught the culprit in the act!

Thankfully the rest of the boxes were okay and we ringed six Blue Tits, 27 Pied Flycatchers and 14 Great Tits. All the chicks that we ringed last week had either fledged or were still in the box as big as the adults and about to fledge; the warm weather has certainly helped! 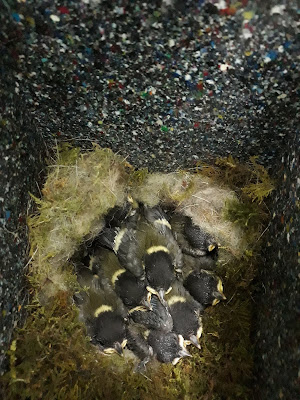 It's more small boxes tomorrow and next week it's on to Barn Owls and Kestrels.
Posted by The Hairy Birder at 20:50