I've had a busy week since coming back from Devon and have been trying to catch up with fieldwork, so it's all been professional birding until this morning. During the week I was carrying out some surveys on a farm on one of the Wyre mosslands and there was an incredible amount of water around with some of the fields flooded quite significantly.

Although causing porblems for the farmers, in terms of getting silage in, the flooding has created some good temporary habitat and on one flood on this particular farm I had 9 Shelducks, 360 Black-headed Gulls (including some juv.'s), 154 Lapwings, 3 Redshank and a single Curlew.

The woodlands and hedgerows held singing Sylvias and Acros and I had 3 Blackcaps, 4 Whitethroats and 3 Sedge Warblers. Talking of Sylvias I was passing the Conder Estuary later in the week and called for a quick look on the estuary and the pools. The tide was running out so the water levels in the estuary were quite high and after all the rain the water levels in the pools were high too. The reuslt of this was few waders. However, I did have a singing Lesser Whitethroat 'rattling' away close to the pool.

This morning Ian and I called at some good friend's of ours farm, Robert and Diana's, to ring some Barn Owl chicks. The chicks were a good size and there were three of them in the box. All three were ringed and placed back into the extremely smelly box. If you've ever smelt an Owl box you'll know what I mean! 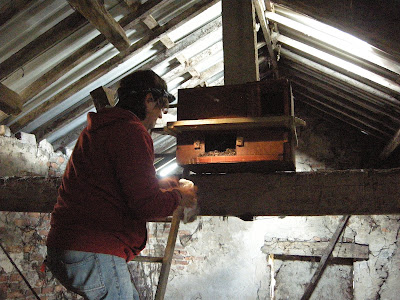 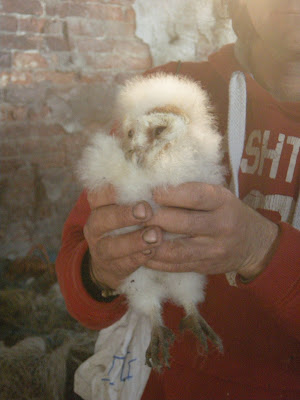 Barn Owl chick
Posted by The Hairy Birder at 12:12 1 comment:

After a weeks holiday in Devon, it was good to be wandering around the obs again this morning. There's only so many cream teas you can have and National Trust properties you can visit!

I didn't venture out too early, arriving at the obs at 6.00 a.m. to full cloud cover and a light northerly wind. I obviously didn't expect any migrants (yet), but wanted to see how some of the breeding birds had fared. A number of fields were flooded after all the heavy rain we have had and on one flood were 122 Herring Gulls with a couple of Lessers.

Blackbirds were making the most of the moist ground conditions to glean inverts from the surface and in a all I had 18 on my walk round. Swallows and House Martins fed over the fields collecting food for hungry chicks back in their nests. With the weather of the past few days I imagine that aerial insects will have been hard to come by.

I had 9 Whitethroats on my round, including a couple of groups of fledged young. I made a note to myself to come back in the week with Ian to clear the net rides and hopefully have a ringing session soon after.Over by the reedbeds in the dunes, three Sedge Warblers were still singing on territory. Whether this means that they have lost nests and started again, I'm not sure.

As expected the sea was very quiet and I had nothing other than a couple of Cormorants and an Oystercatcher! Because of the damp weather there were large numbers of snails around and I was trying my best not to 'crunch' them! Below is a picture of one of the little critters and then another of a couple enjoying some breakfast. Yum, yum! 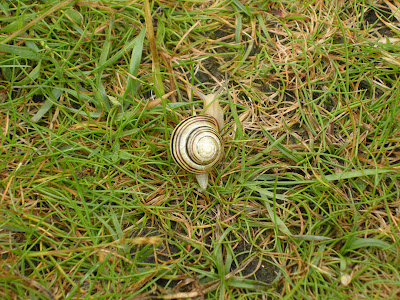 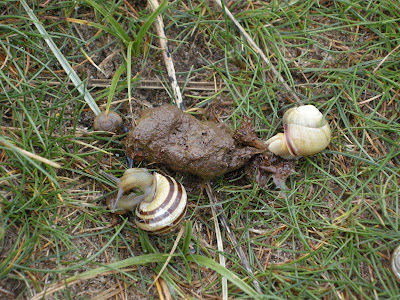 It's been a rather frustrating week for me this week as I haven't had time to do much birding, and then next week I am away on holiday so my 'radio silence' will be extended for another week. Although I haven't been birding for pleasure, I have been birding for a living.

It started off with an upland breeding wader survey. This was the late visit of two visits and it was fairly quiet in terms of breeding waders. Lots of evidence of failed or finished breeders in terms of Curlews and Lapwings flocking. What was interesting was a Lapwing on three eggs, and I wonder whether this will reach completion. 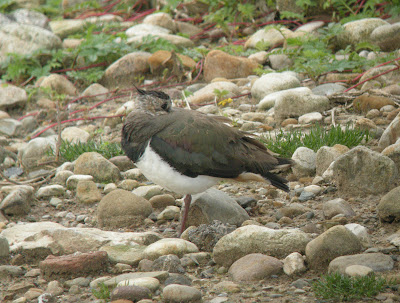 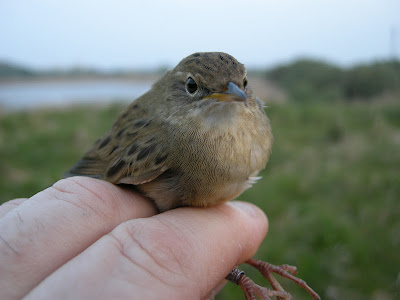 Grasshopper Warbler
The following day I was in Bowland visiting a client and in total I had three singing Cuckoos. In addition to the Cuckoos I didn't have anything very exciting, although every bird is interesting, and on my walk round I had Chiffchaff, Blackcap, Swift, Lesser Redpoll, Goldcrest, Siskin, Great Spotted Woodpecker, Song Thrush, Willow Warbler and Grey Wagtail. 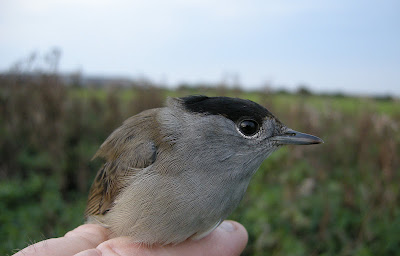 Blackcap
Being an utter technophobe I won't be posting whilst I'm away, so I will catch up with you when I get back, and when autumn will be starting to kick in. Excellent!
Posted by The Hairy Birder at 16:48 2 comments:

Ian and I checked the remainder of our boxes in the Hodder Valley yesterday and after all the rain we have had recently we expected some casualties. We had 15 boxes to check and this included some where we had ringed the pulli last week and we wanted to check the development of the chicks. What we found were what could only be described as mixed fortunes.

For weeks I have been meaning to take the picture below of a sign that is up in the valley where we have our boxes. I thought I would share it with you because every week it makes me smile! 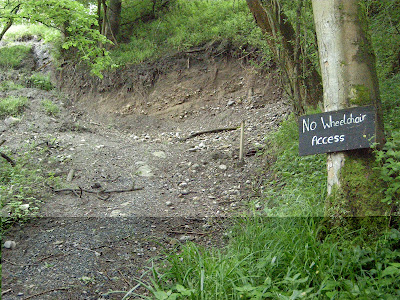 You will probably be aware that I co-write another blog Fleetwood Bird Observatory with my good mate Ian. We operate the Fleetwood peninsula, or should I say Ian does at is Ian who does all the hard work, like a bird observatory and document all the sightings on a daily basis. One of the bird news organisations, not the good people at Birdguides (we like them), another one and I think you probably know who I mean, have been 'cherry picking' certain records from our blog.

On the FBO blog we lump all the individual sites under 'FBO' as we know that people reading the blog aren't really interested whether something is at 'sand bar point' or 'saltmarsh creek' etc, but it is more the flavour of the migration that people are interested in. Not these people; they are desperate for information and they have been trying to guess where certain birds have been within the FBO recording area, and have rather amusingly been getting it wrong! Such is the desperation in our area for some people to twitch common migrants, rather than put the time in to find them for themselves, that some of them will have been heading to the wrong area based on this bird news organisations gen! It amuses us, but doubt it will amuse birders sent on a wild 'common migrant' chase, but then again they probably only have themselves to blame!
Posted by The Hairy Birder at 20:22 2 comments:

Red Hawk is an old Lancashire name for the Kestrel, based on the colour of its plumage. Ian and I went to check one of our Kestrel boxes this morning and as Ian popped his head into the box he could see five young. Four out of the five were a good size, but there was one runt that was quite a bit smaller, and this bird wasn't ringed. 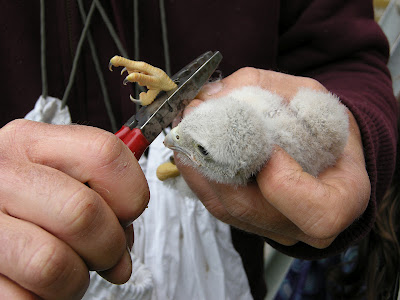 Ian ringing one of the Kestrel chicks 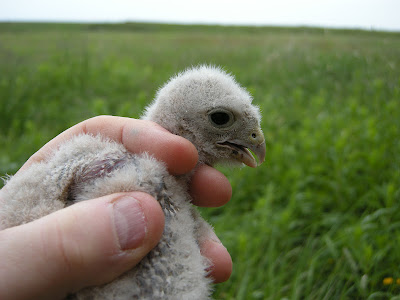 Kestrel chick
Posted by The Hairy Birder at 10:10 3 comments:

First Juvs Of The Autumn

Ian and I had a ringing session in the reedbed this morning and it was quite a productive morning. As I waited for Ian to arrive about 3,000 Starlings exited their roost in the reeds. I imagine that the majority of these would have been brown juveniles.

It was cold at first light and a tad breezy, but as soon as the 'currant bun' rose above the horizon it warmed up. We processed 17 new birds as follows (recaptures in brackets): 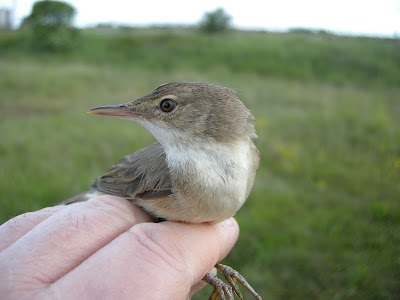 Reed Warbler
The juvs ringed were the Reed Bunting, Wren and three of the Greenfinch. There isn't really a summer in the bird world as you go straight from spring into autumn!

For all the latest news from the obs and to find out where the leg-flagged Sanderling that I an had yesterday was from click here  a little later to find out.
Posted by The Hairy Birder at 11:50 No comments:

A Few Boxes and End of May Ringing Totals

Ian and I went to check our boxes in the Hodder Valley this morning. We had 22 left to check and some of these were to see if the young had fledged successfully from boxes where we had previously ringed the pulli. In total we ringed 21 Blue Tit pulli, 7 Pied Flycatcher pulli and an adult female lifted off the nest and 6 Great Tit pulli. 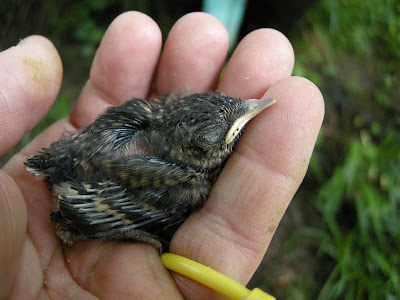 Pied Flycatcher
On the way home we managed to ring a single Lapwing chick. Over on the right I have updated the group's ringing totals and since March we have added 11 species to the year's species list which are Lapwing, Jack Snipe, Woodpigeon, Little Owl, Wheatear, Sedge Warbler, Lesser Whitethroat, Whitethroat, Spotted Flycatcher, Pied Flycatcher and Common Redpoll.

Below I have listed the top ten 'movers and shakers':

U Turn on Buzzard Proposals

Have a look at Mark Avery's blog here to read about the government's u turn on their outrageous proposal to carry out research in to the most effective ways to control Buzzard numbers. Well done to everyone who voiced an opinion, shouted loudly, contacted their MP, publicised it via their blog or signed the online petition!

Have a read of Phil's blog here to read a piece that was in the Daily Telegraph yesterday. One of the conclusions  you can draw from this article is what a tosser Tim Bonner of the Countryside Alliance is. The usual verbal diarrhoea was spouted from his lips; Buzzards affect songbirds and townies and city dwellers don't understand the countryside - yawn, yawn, yawn! As I said before, what a tosser!

On a more positive note I have some nest boxes to check tomorrow and hopefully some Pied Flycatcher chicks to ring, so I'm looking forward to that.
Posted by The Hairy Birder at 09:05 1 comment: