Ian and I had another ringing session at the Swallow roost last night and it was quite successful. We ringed a further 50 Swallows and also 'controlled' a bird too. Y625423 anyone? In addition to the Swallows we ringed a single Sedge Warbler and Reed Bunting. It was obvious the numbers roosting had increased and we estimated that at least 1,500 were coming in to roost, but it is always difficult to tell.

Talking of roosting birds, we noticed some Blue Tits flying in to the 'bulb section' of a street lamp as we were waiting for the Swallows to come in. How many went in to roost in the street lamp I'm not sure, but we saw 4 or 5 go in before it was time for us to splash our way through the reeds.

The Marsh Hawk in the title refers to the stonking views Ian and I had of a juvenile Marsh Harrier early on. Just as we were unpacking our gear Ian spotted the Harrier 'quartering' over some reeds with an agitated Grey Heron in tow. I think Grey Heron mobbing a Marsh Harrier was a first for me! Ian grabbed his camera and according to 'sod's law' the Harrier disappeared. Fast forward ten minutes as we were putting the mist nets up the Marsh Harrier came 'sailiing' directly over our heads. And again 'sod's law' applied as neither of us had our camera with us!

So no new pictures, just a 're-cycled' close up of a Swallow in the hand from the roost last year. 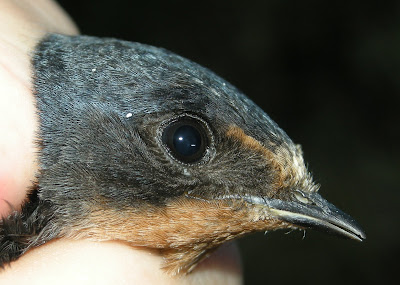 And The Swallows Were Ready

Ian and I had our first Swallow ringing session in the wet reedbed last night and managed to ring 40 Swallows, control one and ring a single Reed Warbler. The ring number of the controlled bird was D006605. It was difficult to tell how many Swallows were coming into roost, but probably not as many as the 1,000 counted a few evenings ago. We will carefully monitor the numbers roosting and hopefully have a couple of catches in the week. Swallow
Posted by The Hairy Birder at 10:48 2 comments:

........., but are the Swallows? This morning Ian and I spent an hour clearing a net ride ready to undertake some ringing at the annual Swallow roost that forms in one of the wet reedbeds at the obs. At the moment there about a thousand Swallows roosting, and I say 'at the moment' as since the last count on Thursday (26th) evening the weather has been fairly unsettled and that has a habit of breaking the roost up. If the weather then becomes settled and Swallows start moving again, the roost will build again.

Below is a picture of the cleared net ride and a Speckled Wood that was sunning itself, or attempting to, on some fencing adjacent to the reedbed. 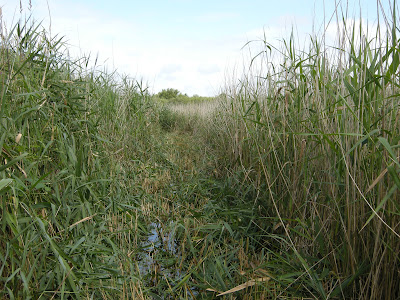 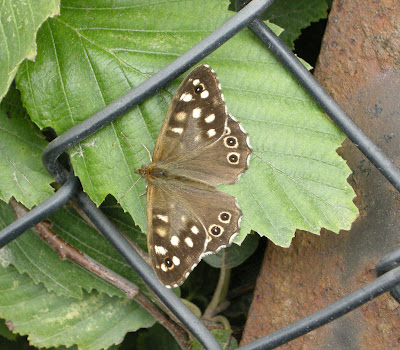 Posted by The Hairy Birder at 15:24 No comments:

I had a pleasant couple of hours watching the sea from the obs this morning before I became a slave to the PC for the rest of the day, or a few hours at least! At first light I had 4 oktas cloud cover with a light westerly wind and after an hour or so the clouds completely cleared.

The first birds I had were four grounded Whitethroats as I walked along the path to the shore. These were the only grounded migrants I had, but I did have three juvenile Kestrels on the ground; they were sat on one of the greens of the golf course! I did wonder if these were the brood of three that Ian and I had ringed from one of our boxes just about 2 km away.

There was a good selection of waders on the beach including 28 Ringed Plovers, 39 Dunlin, 24 Oystercatchers, 161 Sanderling and 42 Turnstones. One of the Ringed Plovers on a different section of beach was giving an alarm call like it had young and low and behold there were three chicks with it. The chicks had rings on so were the birds that Ian had ringed about a week ago. It was good to know that they were still alive! 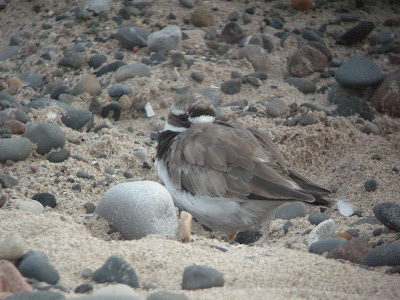 One of the roosting Ringed Plovers
The sea was quiet, but there was just enough to keep my interest up and I had 34 Sandwich Terns, 69 Common Scoters, 12 Gannets, 3 Great Crested Grebes, 45 Cormorants and an Atlantic Grey Seal. The only 'vis' I had was 3 Swallows.

It looks as though it might be too windy for ringing in the morning, so I might just have to have a look on the morning tide again and of course there's that Swallow roost to have a look at in the evening.
Posted by The Hairy Birder at 14:28 No comments:

Last nights heady mix of my mates band playing 'Dark Side of the Moon' and one or two, or was it six or seven pints of St. Austell's 'Tribute' meant that birding was off the agenda this morning; too much of a sore head and too much of a sore throat from singing! When I staggered in some time after midnight I remembered to switch my moth trap on and was glad that I did as I had my first reasonable catch of the summer.

I caught 37 moths of 12 species, not counting the ones that got away! I caught 2 Buff Ermines, 4 Large Yellow Underwings, 4 Dotted Clays, a Plume Moth, 4 Garden Carpets, 2 Gothic, 8 Dark Arches, 6 Common Rustic, 3 Light Arches, a Bright-line Brown-eye, a Heart and Dart and a Scalloped Oak.

Scalloped Oak
The forecast for tomorrow isn't clear cut at the moment so whether I get out birding or get some survey work done I'm not sure.
Posted by The Hairy Birder at 11:39 No comments:

It was another early start in the reedbed for me again this morning and at last it has stopped raining! It was virtually clear at first light with a barely noticeable easterly breeze. I was on my own this morning so I only put up 220 feet of netting in the willow scrub and wet reedbed.

I was hoping for a decent catch, but it wasn't to be, and a number of theories as to why I didn't catch well crossed my brain, with the most plausible being that the previous night was the first clear night for a while and this had probably cleared the birds out. Ringers/Birders always have to have a theory as to why they didn't catch or why it was quiet don't they?

I processed 8 new birds as follows (recaptures in brackets):

Lesser Whitethroat
Just after I had put the nets up the Starlings came out of the roost and I estimated that there were 2-3,000 birds in one large flock. A Grey Wagtail on 'vis' heading south was to be the only bird that I could definitely say was moving. And that was about it!

Back home I emptied my moth trap and I had Large Yellow-underwing, Gothic, 2 Dotted Clay, 3 Garden Darts, Buff Ermine and Common Rustic.

Buff Ermine
It's going to be a late night tonight for me watching my mates prog band, but as long as I don't have too much 'pop' I should get out round the obs at some point in the morning; weather permitting of course!
Posted by The Hairy Birder at 14:47 No comments:

A Good Selection of July Birds

Ian and I ventured forth to the reedbed this morning for a crack of dawn start to a ringing session and the crack of dawn is flipping early at this time of the year! We were greeted with 4 oktas cloud cover and a 5-10 mph NE wind. It was a little slow to start with and then it picked up.

Between net rounds we talked about the fact that even though we ringed in a wet reedbed with willow carr, we didn't really catch many Reed Buntings as there's only about 3-4 pairs on site. A few hours later we had ringed 25 birds and 9 of them were Reed Bunts!

Reed Bunting
We also talked about the fact that at this time of year at certain sites, it is often hard to tell what are grounded migrants and what are local breeding birds dispersing. We caught a juv Garden Warbler this morning, which would almost certainly have been a grounded migrant based on the fact that they don't breed any where around the obs.

Garden Warbler
As I said before we ringed 25 birds and recaptured (brackets) 3 birds as follows:

Goldfinch
At this time of year we start to check the reedbeds around the obs for Swallow roosts and yesterday evening Ian had about 100 coming into roost. It's not just Swallows that roost in the reeds, but Starlings as well and this morning as we were putting the nets up we had about 3,000 exiting their roost.

A calling Great Spotted Woodpecker was a little unusual for the site and we had some vis in the form of a single Siskin heading east. The only raptor we had was a Peregrine flying over with large prey (Pigeon?) and it was flying very slowly and flapping very hard as it struggled to transport its meal to a favoured plucking post.
Posted by The Hairy Birder at 20:36 No comments:

Over on the right you will see that I have updated the ringing totals for Fylde Ringing Group until the end of June. We have ringed 1,619 birds of 58 species. This time last year we had ringed 1,789 birds so we are just 170 down on last year, which isn't bad considering how wet it has been of late. A good percentage of the birds ringed in June have been ringed by Ian (early morning & evening reedbed sessions) and Paul (Tree Sparrow pulli).

Five new species were added to the total for the year and these were Sparrowhawk, Kestrel, Oystercatcher, Barn Owl and Swallow. I have listed below the top ten 'movers and shakers':

So it's all been very static in terms of the 'top 10' except for Dunnock and Turnstone changing positions at the bottom of the table. Which species will appear in the top ten next month? Based on those that are just 'bubbling under' we could see Robin, Sedge Warbler and Greenfinch make an appearance!
Posted by The Hairy Birder at 15:14 2 comments:

For the past couple of weeks my life seems to have been ruled by domesticity, but there is 'autumnal' light at the end of the tunnel! I had to take 'her indoors' on a weeks holiday, then I took my mother over to Ireland to visit her siblings and this week I have an Aunty and Uncle over from Canada staying with me. Where has all the birding gone?!

On my trip to Ireland I did see a few birds particularly on the ferry from Cairnryan to Belfast. Nothing unusual, and no Petrels or Skuas, but I did have 127 Gannets, 45 Shags, 37 Gullemots, 79 Manx Shearwaters, 3 Arctic Terns, 10 Kittiwakes, 37 Razorbills, 8 Puffins, 7 Fulmars, 4 Sandwich Terns, 17 Black Guillemots and 39 Common Terns.

Over in Ireland I did see the obligatory Black Guillemots and Hooded Crows at various coastal locations, but not a lot else. The forecast looks okay to get out birding before a day in the office tomorrow so I'll wait and see what tomorrow brings.
Posted by The Hairy Birder at 13:29 No comments: