My work of late has predominantly taken me to north Cumbria, but on Friday it took me a little further north to southwest Scotland. I had two site visits; one to the southwest of Dumfries and the other to the northeast of Castle Douglas. Both sites are firmly in 'Kite country' and I was looking forward to seeing some Red Kites during my site visits.

I wasn't disappointed at seeing three Red Kites, but was hoping for a few more. However, this wasn't to be as the weather conditions during my site visits was particularly wet with poor visibility, not conducive for seeing Kites. Having said that it was still a thrill to see three of these great big lolloping raptors!

Hopping back south of the border I had another survey of young plantation woodland to do close to Penrith. The site is fairly isolated without any corridors connecting the plantation to habitat in the wider landscape and as a result bird usage has been minimal. Meagre highlights of this last survey included five Tree Sparrows, a Buzzard, a Raven and a Willow Warbler. 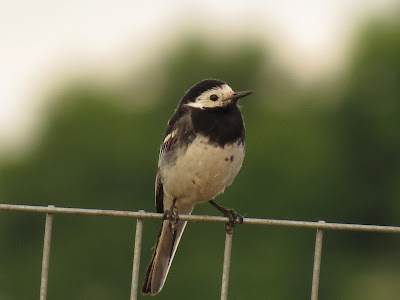 We've got Swallows again this year roosting at one of the pools at the Obs so hopefully I'll have some news from there soon!
Posted by The Hairy Birder at 13:41 No comments:

Return To The Reeds

During the past few days Ian and I have had two ringing sessions in the reeds and scrub at the Obs. These were the first sessions since we cleared the net rides just over a week ago. I've lumped together the ringing totals for both sessions and we ringed the following species (recaptures in brackets): 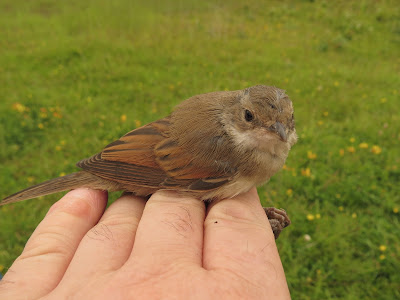 As we were putting the nets up we had at least fifteen Pied Wagtails over that were exiting a roost somewhere on the docks. Talking of wagtails during both sessions we had a Grey Wagtail fly over high to the southwest and it is a bit too early for a proper migrant and was likely a local bird moving around.

On the subject of movement 150 Jackdaws went over heading west. They were flying quite high and had come from over the river. After we packed up we had a look on the pools on our way out and counted 25 Coots, 18 Little Grebes and eleven Tufted Ducks.
Posted by The Hairy Birder at 20:28 No comments:

Just Before The Mini Heat Wave

Earlier this week I had another bird survey to complete in north Cumbria, not too far from Wigton, and I got it done just before the mini heat wave of Tuesday and Wednesday. Once again it was in some relatively young plantation woodland and it held a few birds. In no particular order I recorded three Lesser Redpolls, three Song Thrushes, two Great Spotted Woodpeckers, a Coal Tit, three Willow Warblers, a Whitethroat, two Chiffchaffs, eleven Chaffinches and four Blackcaps.

Back home and in my garden during the afternoon I had a Grey Wagtail go over. Probably not a proper migrant but likely to be a local breeder or juvenile bird dispersing!
Posted by The Hairy Birder at 14:41 No comments:

One Fulmar Does Not A Seawatch Make

On Saturday morning I headed to the Point for my first seawatch in some time. I had 7 oktas cloud cover with a 15 mph west-northwesterly wind. It was quite warm and looking back at my notebook for this time last year I was complaining about having to wear hat and gloves, so maybe this summer is marginally better!

The first bird that I had heading west out of the bay was a Fulmar and as it appeared so early on I thought there was some hope of a reasonable count and haul of species. The Fulmar gave me a false sense of hope and I should have realised that as there was some northerly in the westerly (I don't how many times I have said that here), it wasn't going to be a good seawatch!

The Fulmar was the star of the morning and the supporting cast at sea included a Sandwich Tern, a flock (yes a flock) of five Great Crested Grebes, three Cormorants, 13 Common Scoters and three Gannets.

And that was it! There was only one sensible option and that was to take up Ian's offer of a decent coffee back at his. So I did and as usual we put the birding world to rights!
Posted by The Hairy Birder at 14:29 No comments:

At 5:00 a.m. last Thursday I felt the first autumnal nip in the air! As I got out of my car to start my survey the thermometer read 6 degrees and it definitely had an autumnal feel with 'ticking' Robins to boot! I even detected a bit of vis with Swallows heading south as I drove over Faulds Brow and my first high flying Lesser Redpoll of the autumn!

It was one of my regular surveys of young plantation woodland and of moderate interest I recorded a Stock Dove, a Blackcap, a Chiffchaff, a Lesser Redpoll, a Great Spotted Woodpecker, three Tree Sparrows, two Buzzards, a Nuthatch and two Bullfinches. 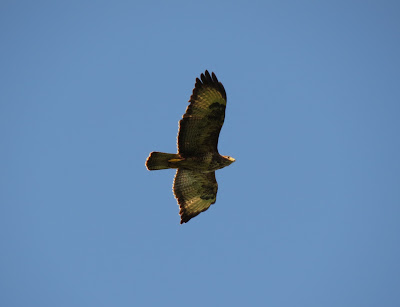 The Buzzards were obviously breeding in the adjacent woodland and as soon as I was spotted they were in the air alarm calling. I always enjoy seeing Bullfinches as down here on the Fylde they are quite scarce!
Posted by The Hairy Birder at 14:33 No comments:

Over on the right I have updated the ringing totals for Fylde Ringing Group up until the end of June. June was a fairly quiet month for us and as a result we are now 89 birds behind where we were last year.

We ringed two new species for the year and these were a brood of three Kestrels and a brood of two Barn Owls. Below I have listed the top two species ringed during June and also listed the 'movers and shakers' for the year. I've only done a top two for the month because it was so quiet and as a result you will notice that the top ten 'movers and shakers' have remained fairly static!

Hopefully by the end of July a few more warbler species will have made in appearance.
Posted by The Hairy Birder at 14:54 No comments:

A lot of people would think that I live up north living in northwest Lancashire but during the past week Gail and I have been properly up north by spending a week in the Oban area. It was a more of week of Gail and I pursuing our shared passion of archaeology and history, as our holidays usually are, but being a birder and keen naturalist there is always some wildlife present! 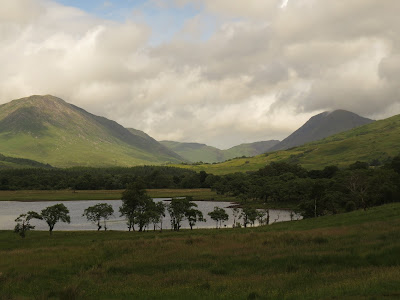 On the way up to Oban we stopped off at Kilchurn Castle on Loch Awe and as at a lot of historic sites it is in a stunning location adjacent to some cracking habitat. It's always a pleasure visiting western Scotland for the Hooded Crows. Although they are just really a piebald version of our humble Carrion Crow there is 'something' about them! 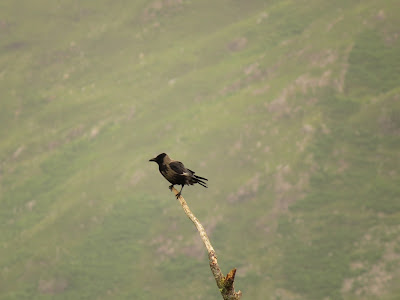 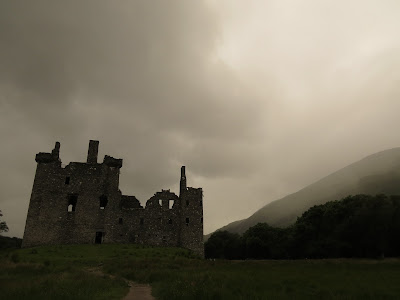 Adding to the atmosphere of the place were a family of four Ravens that were hanging about on the battlements of the castle as we approached and a Common Sandpiper and two Red-breasted Mergansers were good to see. 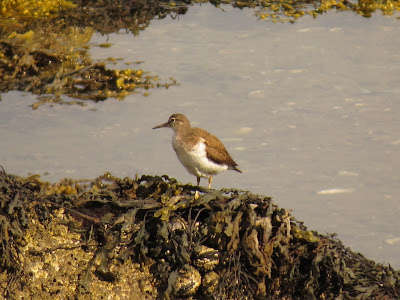 We called at various sites in our quest to look at the past including Dunstaffnage Castle, Loch Feochan and Easdale and bumped into more bird species including more Hooded Crows, displaying Siskins, more Common Sandpipers, more Ravens, Song Thrushes, Gannets, Rock Pipits and Linnets. Nothing out of the ordinary but all adding another texture to the historical palette! 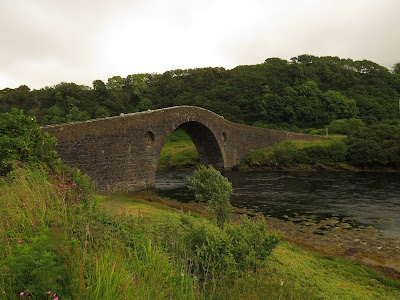 The bridge 'over the Atlantic'. The Clachan Bridge joining the mainland
with Seil Island. 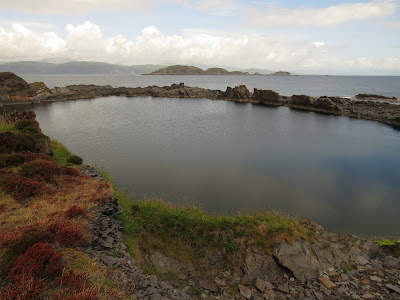 A trip to the Isle of Mull was arranged and we were given the details of a good White-tailed Eagle location from my good friend Ann. From the boat across to Mull we had stonking views of Gannets, Guillemots, Manx Shearwaters, Black Guillemots, Kittiwakes, Arctic Terns and Common Terns. 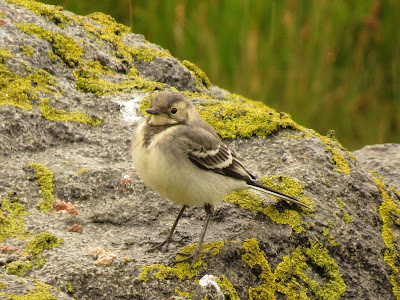 We got to the Sea Eagle spot and the ubiquitous 'Hoodies' were present as were three Ravens that I thought might come in useful in alerting us if a White-tailed Eagle approached. Sure enough after about an hour I heard the Ravens alarm calling and looked up to see an adult Sea Eagle flying past carrying food and being mobbed by two of the Ravens! It was great to see the Ravens alongside the White-tailed Eagle as it illustrated just how big the Eagles are! The return boat trip was similar to the earlier one with the addition of seven Razorbills! 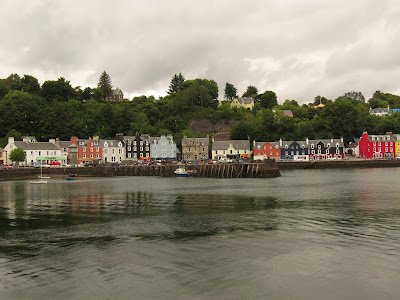 It is one of my ambitions in life to eventually move to Scotland, I'm working on Gail, and if and when it happens it won't be up as far as Oban but more likely to be southwest Scotland which I also adore! The beauty of living in southwest Scotland is that we will just be about an hour and a half from family and friends down here, we will be living in a beautiful part of the UK (I love the Solway) and we'll only be about three hours plus from western Scotland!

Back home this week but still 'up north' I had a bird survey to complete in north Cumbria only a few miles from Carlisle. Again nothing particularly unusual in these young plantation woodlands but I did have a Yellowhammer, a Great Spotted Woodpecker, three Linnets, a Chiffchaff, two Willow Warblers, a Song Thrush, a Buzzard and two Stock Doves.

After my survey I had a look on part of the Solway (and across to Scotland!) at Drumburgh and just had an adult Med. Gull, 53 Lapwings, 22 Curlews and thirteen Shelducks. 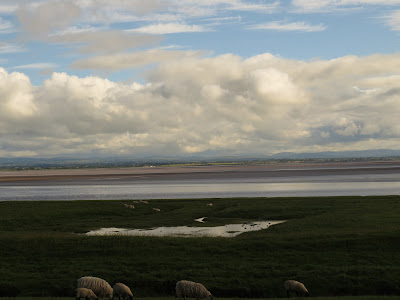 It's looking a bit unsettled at weekend but I'm sure I'll be get out and do something!
Posted by The Hairy Birder at 20:01 No comments: