I called at my feeding station this morning to put some food out and the plan was to have a walk round afterwards. There were good numbers of birds at the feeding station including 170 Tree Sparrows, 31 Chaffinch and 6 Blackbirds. 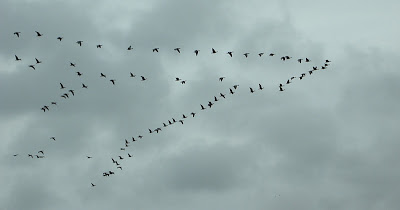 Pink-footed Geese
Instead, I headed across the 'big field' and walked through some areas I don't normally cover. I didn't have a great deal other than 41 Skylarks, 2 Buzzards, 11 Meadow Pipits, 7 Reed Buntings and 4,076 Starlings.
Posted by The Hairy Birder at 16:52 2 comments:

I could have caught a few Thrushes this morning at my feeding station but I thought it was too windy at first and delayed putting any nets up in the dark, so when I did get them up it was coming light and the Fieldfare and Redwing that I pulled down could see the net.

It was a murky morning with low cloud and you could feel the moisture in the air. Good numbers of Starlings, I counted 16,435, were arriving from a roost to the west and heading off to the east to feed. Some alighted on the telegraph wires in the field behind the feeding station and when they took off from the wires they 'twanged' like a giant elastic band. If you missed the amazing amateur video footage of a 'murmeration' of Starlings on the River Shannon in Ireland, shown on 'Autumnwatch' last Friday (18th), have a look below.

Approximately 148 Tree Sparrows, 16 Chaffinch and 4 Yellowhammers were at the feeding station. 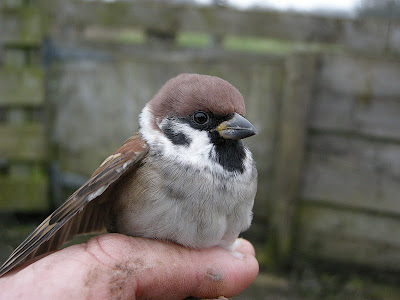 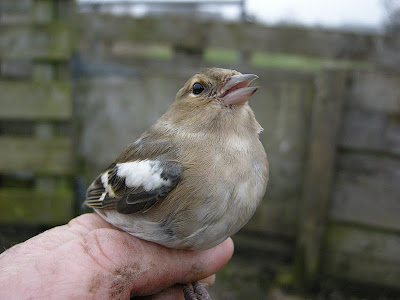 Chaffinch
I managed to ring 31 birds this morning as follows (recaptures in brackets): 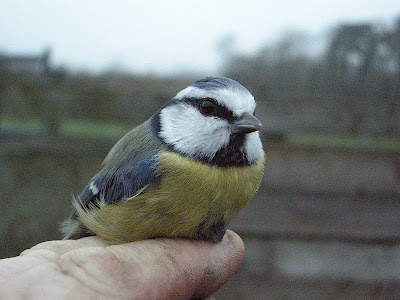 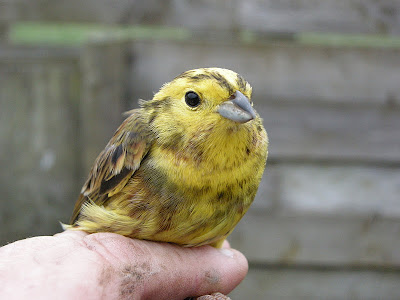 Yellowhammer
The only other entry in my notebook is a Sparrowhawk that made a couple of unsuccessful attempts to catch a Starling out of a massive 'wheeling' flock. The weather is turning westerly later in the week, but not getting any colder. 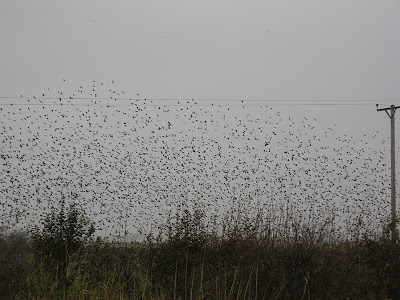 Starlings
Posted by The Hairy Birder at 19:33 No comments:

I made a quick call at my feeding station and it was pleasing to report that Tree Sparrow numbers had increased to 157 and in association with this the number of Chaffinches had increased to 49. Eleven Blackbirds were down the track to the feeding station and eleven Long-tailed Tits were in the hawthorn hedge. I was there early and it is possible that the 'Long-taileds' had been feeding on the peanut feeders. 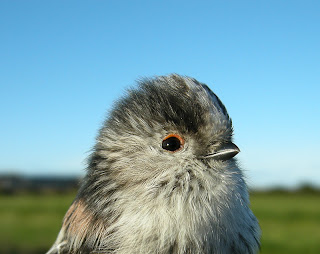 Long-tailed Tit
I only had time for a short walk along the '97 hedge' and all I could add were a single Fieldfare and 7 Reed Buntings. Walking back I had 2 Whooper Swans head north and it was then time to leave.
Posted by The Hairy Birder at 17:51 2 comments:

Yes, I can spell and no I haven't spelt 'rocket' incorrectly! I went to the 'obs' this morning for a quick look before I was dragged back indoors to do some DIY! It was my first visit to the obs for eight days so I was looking forward to seeing what was about. Not a great deal actually!

The first bird I had was a calling Brambling heading south and this was the start of a trickle of vis. The vis included 2 Goldfinch, 4 Pied Wagtails, 13 Meadow Pipits, 4 Carrion Crows, 4 Chaffinch, Fieldfare, 6 Linnets, Redwing, Woodpigeon, 11 Jackdaws and a Siskin. I had a Rock Pipit fly 'in-off' at a great height and then plummet down. It perched on a concrete post to preen before heading off southwest. You will find a grainy picture of it below. 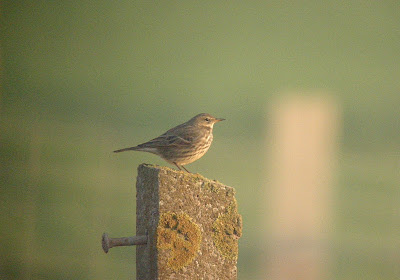 The only birds that I thought were grounded this morning were 14 Blackbirds and a single Song Thrush. Certainly not grounded, but flying in to feed on adjacent farmland were 1,404 Pink-footed Geese. Unfortunately I couldn't see them from the road so couldn't have a look through them to see if they were holding anything else.

The sea was very quiet with just 8 Eiders and 15 Cormorants. I walked back along the hedgerows trying to produce a 'goody' but it wasn't to be. Instead I took a couple of pictures of the beautiful flowering gorse and with the sweet coconut scent of the flowers on the wind I headed home for a spot of decorating. Ouch! 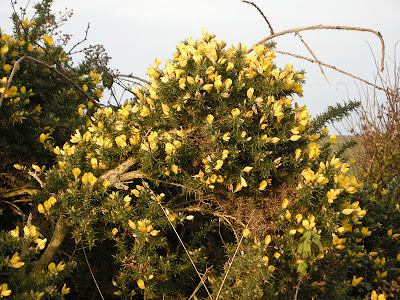 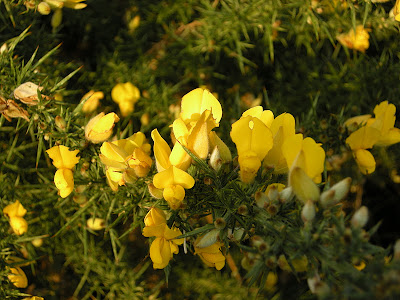 It was obvious that there had been an increase in Blackbirds as I had 17 along the track leading to the feeding station. It couldn't be said the same for other Thrush species as all I had were 5 Fieldfares. I had a brief walk along the '97' hedge and there were 9 more Reed Buntings and a single Corn Bunting.

Blackbird
It looks as though the weather is going to remain in the southeast for the coming week at a strength too strong for any ringing, so it will be pure birding for me.
Posted by The Hairy Birder at 18:24 No comments:

.........began with a walk down the Point. It was a different morning to yesterday with no drizzle, clearer conditions out in the Bay and a stiffer southeasterly wind.

There were a few waders on the beach including 78 Oystercatchers, 15 Turnstone and 28 Sanderling. Vis was virtually non existent with just 3 Chaffinch, single Meadow and Rock Pipits and single Alba Wag all heading west. 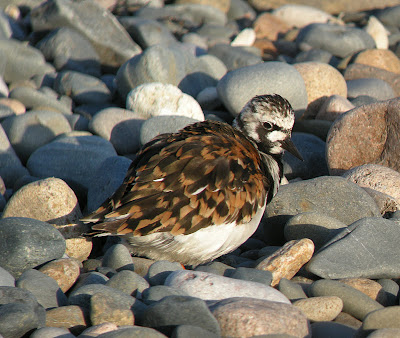 Turnstone
On the sea were 36 Eiders, 33 Cormorants, 5 Great Crested Grebes, 3 Red-throated Divers, 5 Razorbills, 7 Auk sp., Shelduck and Common Scoter. So not exactly jumping with birds, but a nice way to start the day.
Posted by The Hairy Birder at 09:43 3 comments:

........for a dark, dank, drizzly, dreary morning! Before I locked my self away in my office for the day I nipped up to the 'Point' after breakfast to have a look on the incoming tide. The visibility was pretty poor, but I did have a few birds of interest to set me up for a day in doors.

A few waders roosted along the shore and I had 152 Oystercatchers, 52 Turnstones, Ringed Plover, 17 Sanderling and a single Knot. 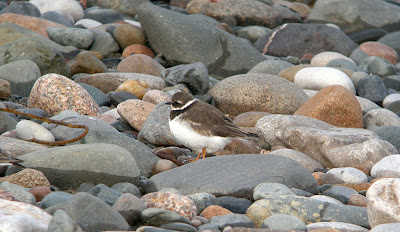 Ringed :Pover
Even though it was murky there were some birds on the sea that showed quite well. By far the most numerous species were the 82 Eiders that bobbed up and down on the tide. The only other wildfowl I had were 2 Red-breasted Mergansers and 8 Common Scoters.

Divers and Grebes were represented by 2 Red-throated Divers and 5 Great Crested Grebes. One of the Divers was very close in and gave great views as it proceeded to preen for several minutes. Likewise, one of the 'Great Crests' showed well and I watched it catching small fish.

I had 3 Razorbills and a single Guillemot, and the only 'vis' was 2 Alba Wagtails west. I have another 'office' day tomorrow, so I might just start it off again at the Point.
Posted by The Hairy Birder at 17:50 2 comments:

In The Land Of Frost And Mist

It was the first ringing session at my farmland bird feeding station on the moss this morning and the frosty and misty conditions were a bit of shock. The moss is very low lying and combined with the fact it is inland it is often misty first thing in the morning. Thankfully the mist was just patchy and when I arrived on site it was clear.

As I drove past the barn a Barn Owl flew out in the dark and this owl sighting was closely followed by 2 males and a female Tawny Owl calling in the darkness as I took the poles off the roof of my car. I put the two nets up at the feeding station and Redwing and Fieldfare songs were played on my MP3 players and a Song Thrush and 3 Fieldfares were pulled in. 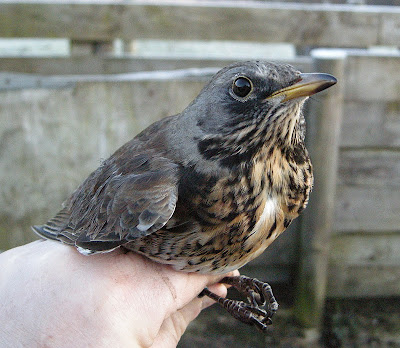 Fieldfare
I ringed 24 birds as follows (recaptures in brackets): 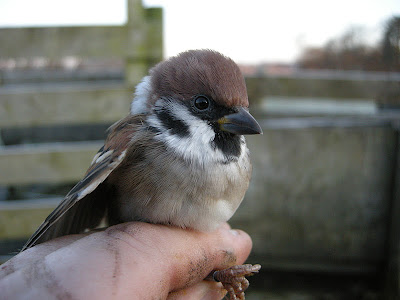 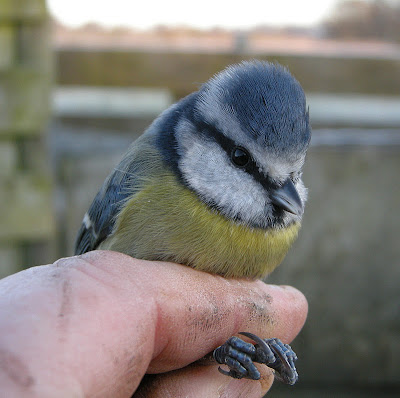 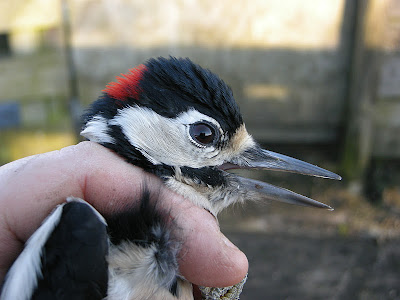 Great Spotted Woodpecker
Quite often at feeding stations you recapture birds that were ringed a few years ago and have seldom been caught in the intervening time. The Great Tit that I recaptured this morning was first ringed at the feeding station on 13/12/2009, then recaptured on 23/01/2010, 20/02/2011 and of course today.

There were good numbers of Pink-footed Geese around and I couldn't see where they were feeding to the east of me, but I counted 3,929 flying in to feed, so I am guessing there were 2 - 3 times that number based on the noise they made when disturbed.

It's always difficult judging how many birds are using the feeding station when you are ringing but I think about 50 Tree Sparrows were coming into feed with smaller numbers of Chaffinch. The only raptor I had this morning was a Kestrel and the only other red-listed farmland birds I had other than the Tree Sparrows was a single Yellowhammer. 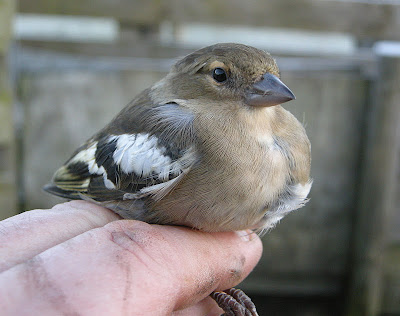 Chaffinch
On my way home I had a look on the river and I had a group of 6 Goosanders.
Posted by The Hairy Birder at 20:30 1 comment:

Last Gasp At The Obs

Ian and I paid a last visit for the autumn to the obs this morning, although with the forecasted easterlies next week I did wonder if we had taken all our kit back a little early! There seemed to be a few more Thrushes around this morning by the number of Blackbirds calling in the darkness as we put the nets up, and also the ringing totals showed this as well.

It was absolutely flat calm and we couldn't help thinking why it couldn't have been like this a few weeks ago when migration was in full swing. We ringed 17 birds as follows (recaptures in brackets): 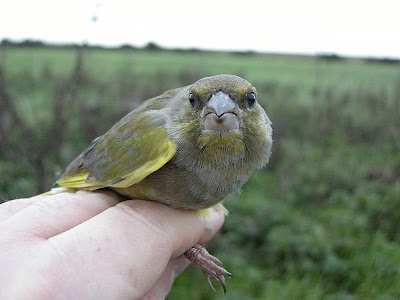 Greenfinch
There was some 'vis' this morning, although it only lasted for a short time from first light, and we had 4 Fieldfares, 5 Redwings, Brambling, Lesser Redpoll, 2 Alba Wags, 8 Meadow Pipits, Linnet and 50 Greenfinch.

Other than a single Sparrowhawk and large numbers of Pink-footed Geese dropping on to farmland to the east of us, that was about all we had. The forecast looks okay for some more ringing tomorrow, so I think a change in scene is in order with a first visit for the season to my farmland bird feeding station. I'll keep you posted.
Posted by The Hairy Birder at 15:57 No comments:

If you look at the panel to the right you will see that I have updated the ringing group's (Fylde RG) totals for 2011 up until the end of October. I have detailed the top ten below:

Meadow Pipit
The only species to drop out of the top ten from last month was Willow Warbler. Other species where we have ringed over 100 birds are Blackbird - 117, Willow Warbler - 142 and Great Tit - 129.

It will be interesting to see what November brings as we will be relying on the feeding stations until the end of the year. Hopefully the number of Tree Sparrows ringed will have increased and we should also see some increase in the number of Chaffinch and perhaps Siskin. We'll have to wait and see.
Posted by The Hairy Birder at 21:06 2 comments: