Two Hats To A Cap

First of all, I need to apologise for not posting for a while, but I have had some major computer issues. To cut a long story short, Windows 10 decided to corrupt itself, and my computer was with the repairers for four days, and I only got it back yesterday. But enough of my woes!
Metaphorically speaking, I often have to wear two hats, but when I was over on the east coast at my survey site on the Humber Estuary last week, I literally had to wear two hats as it was so cold! It was a glorious morning with clear skies, and a chilly easterly wind with plenty of lying snow.
My transect route to my VP location takes me through what you would describe as 'habitat mosaic', with lots of scrub that will no doubt support a good breeding bird assemblage, and I look forward to completing breeding bird surveys here later in the year. I've mentioned before how you get quite attached to various survey sites, and even though you might only spend a year or less at these sites, they sort of get under your skin, and feel like a local, or not so local, patch. As I walked through the scrub, I saw a flash of pink and a white rump, and there was a cracking male Bullfinch. And another white rump, and the female popped up. Not rare or even scarce birds, but I hadn't seen them here before, so that made them special. 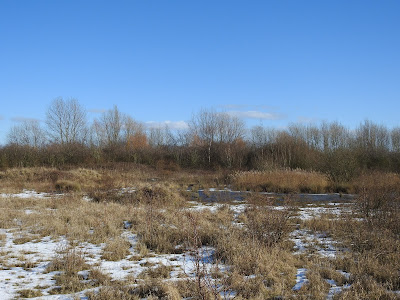 Habitat mosaic in the snow 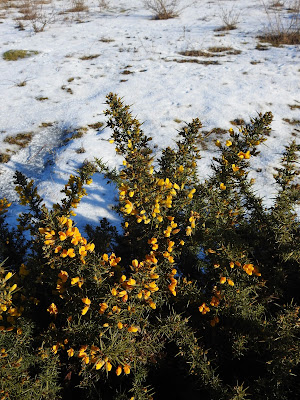 I love the contrast of the green and yellow of the Gorse,
with the white of the snow 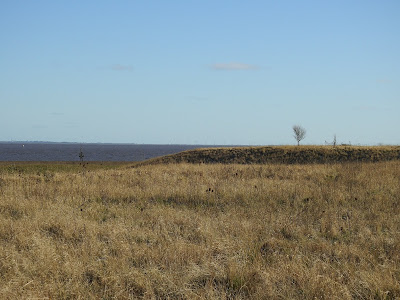 My VP in the distance next to the lone tree 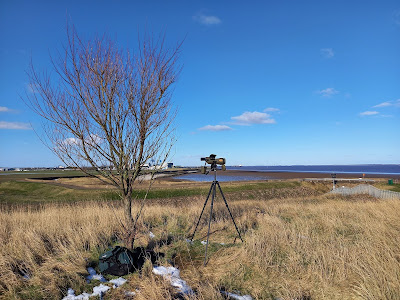 My VP set up overlooking the estuary

Other species in and around the scrub were four Skylarks, eight Meadow Pipits, a Yellowhammer and two Reed Buntings. Walking towards my VP across some rank grassland with scattered Hawthorn scrub, with some small wet flashes, I flushed a Jack Snipe. And again, a new bird for the site. Or should I say a new bird for me at the site, as I am sure that Jack Snipes have been wintering here for many years. 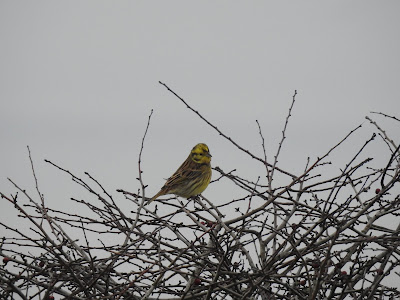 A distant Yellowhammer
I set up at my VP overlooking s stretch of the estuary and I started to count; 122 Shelducks, a Golden Plover, a Grey Plover, 79 Dunlin, 211 Black-tailed Godwits, 90 Bar-tailed Godwits, 48 Curlews, seven Redshanks, three Turnstones and 260 Black-headed Gulls. Looking downstream and beyond the area that I count, there were thousands of waders out on the mud, and I was quite happy that I wasn't counting them. 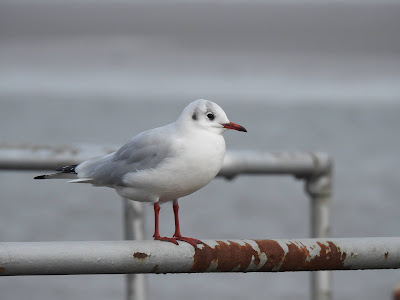 Black-headed Gull
On my walk back to my car I encountered two Buzzards, and then I heard a rustle behind me, and on turning round two Roe Deer bucks ran past. 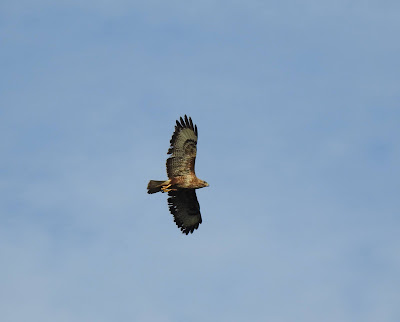 Buzzard
Back in the west this week, I completed a survey at each of my two winter survey sites and the weather had warmed up, and I had switched from two hats to a cap! I started off at the site with an area of marsh, and just after first light a few Pink-footed Geese were on the move, and the 365 birds that I recorded were moving mainly north.
The water levels were a little higher on the marsh than usual, and from my VP I could see over an area of relatively open water and counted eleven Teal and 20 Mallards. Usually, I just record Teal calling and have no idea how many there are. At least two Water Rails called from the marsh, as did a Reed Bunting.
On the arable field in front of me, I hadn't noticed the 57 Fieldfares that were foraging for invertebrates in the wet conditions until a Buzzard flew low over the field flushing them. Another Buzzard called from behind me, and a male Kestrel had a similar effect on these northern Thrushes.
Walking to my second VP, I had a Grey Wagtail feeding around the edge of a flooded field corner, and close by a Little Egret popped out of a ditch and headed south and out of sight.
Towards the end of the week, I was at my survey site virtually on the west coast. Again, it was mild with a stiff south-westerly wind and a few Pink-footed Geese headed north just after sunrise, and this time they numbered 187. I had a further seven Pink-footed Geese drop into the field that my second VP is located in, just as I was getting out of my car, and 174 in the fields to the west of my third VP. 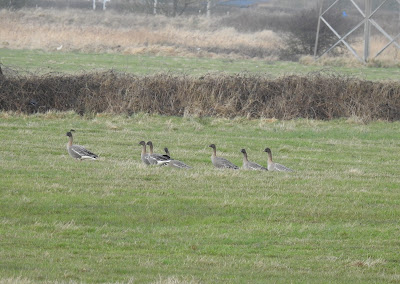 Pink-footed Geese
I noticed a number of Song Thrushes in and around the area of scrub that forms part of my survey site, and I had three singing males, plus a further two individuals. A Little Egret made an appearance here too, and probably the highlight of the morning was the Woodcock that I flushed from the edge of the scrub.
Restrictions have been relaxed by the BTO for carrying out surveys, or perhaps more accurately the guidance from the government is a little clearer, and survey work is allowed to continue during lockdown. We just need an improvement in the weather, and I should be able to do some ringing again.
Posted by The Hairy Birder at 16:21 No comments:

Amongst all the media hype of the 'Beast From The East Two', it might seem strange to talk about signs of spring, but they are there. Bird song is slowly increasing, and I am hearing Wrens, Dunnocks, Blue Tits, Robins, Great Tits, Greenfinches, Goldfinches, Blackbirds, Mistle and Song Thrushes all tentatively warming up their vocal cords. We've got Snowdrops in flower, and Hazel catkins are out, but one of my favourite signs of spring is the return passage of Common Gulls. Once we get into February, numbers of these gorgeous little Gulls increase, and you start to see them more often on areas of open grassland, and even better when they get their pristine summer plumage. And if you are lucky enough to hear one, or even a flock calling, you will know why they are probably my favourite Gull species. Anyway, more on Common Gulls later. 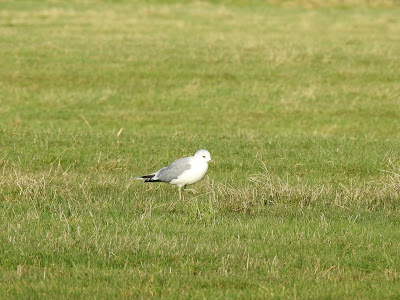 Apologies for the quality of the above picture. The Common Gulls were
quite distant, and continually walking around feeding. That's my excuse
anyway!
During lockdown, I have managed to keep my Bowland feeding station going, just, because I pass it on my way to and from one of my client's farms where I do a lot of work. I normally like to visit the feeding station twice a week to make sure the feeders never empty, but during this current period of lockdown it has often just been once a week. However, I do have two big feeders up, that I have posted about before, so even on a just about weekly visit there is still some food left.
The usual suspects have been at the feeding station; Nuthatches, Chaffinches, Great Tits, Blue Tits, Coal Tits and Goldfinches, but I haven't had much in the surrounding woodland, other than a singing Mistle Thrush, a Buzzard, a singing Goldcrest, 'shouting' Jays and a Treecreeper. On one visit I flushed a Woodcock from the woodland, so that was a bonus, but an expected one as I had been looking out for them. 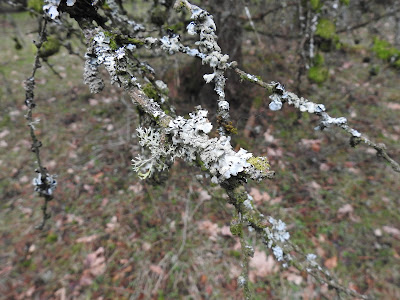 This is Common Greenshield Lichen, I think, and it is very common on trees
close to the feeding station. 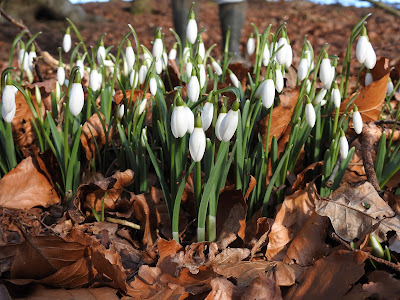 One of everybody's favourite signs of spring, the Snowdrop. There are plenty
of them in the woodland where my feeding station is located.
Since my last post, I have been busy with my wintering bird surveys, but they have become even quieter than they were before. It would seem that this latest cold snap has pushed a few birds on. When I got out of my car at one of the areas of my west coast survey site, I was greeted with the sight and sound of a flock of 52 Black-tailed Godwits flying round over some fields that they obviously wanted to drop into. The high tide had very probably pushed them off the river and they had moved a few hundred metres inland to try and find somewhere to feed. After they had circled round a few times they headed back towards the river.
It was here that I had my first Common Gulls of the spring. Not many, just three individuals of my favourite Gull. In the same set of fields, I had two Buzzards and two Mistle Thrushes, and that was that. Time to head home for a warm, and get the coffee on.
Over on the right you will see I have updated, or should I say added, the ringing totals for Fylde Ringing Group for January 2021. Below you will find details of the top two species ringed during the month.
Top 2 Ringed in January
1. Linnet - 27
2. Blue Tit - 18
Posted by The Hairy Birder at 16:16 No comments: