I was back in the northeast again yesterday, and in fact since I was there last week I have done very little birding other than recording the birds in my garden on a daily basis, mainly because of the weather.

It was cold yesterday, and on my drive through the Howgills, with views across to the Lakes and further on the North Pennines to the Borders, there was snow on high ground. There was a hard frost at my survey site near Berwick too, and even the sand was frozen! Cue the climate change nay sayers who stupidly confuse weather with climate, and use cold weather as their argument that climate change isn't real. That numptie Trump in the US is an exponent of this! Anyway, don't get me started...enough of climate change!

The sun rise was beautiful, and I suppose where better to watch the sun rise, but on the east coast! 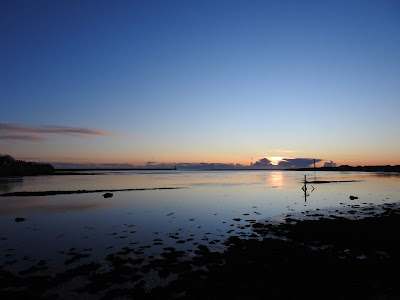 I had a low water count to complete yesterday, and what is interesting about this site is the lack of species feeding in the estuary. I think this is because of the type of estuary it is, with very little mud, mainly a rocky substrate with sand. The two main wader species that I record were Redshank and Curlew, and I had 81 and 30 respectively of each. 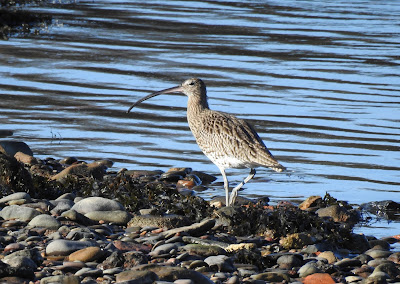 Perhaps my best sighting of the morning was a female Long-tailed Duck, mainly because they are so scarce in the Irish Sea where I bird, but also because of the great views I had of it. I was counting a flock of Goldeneyes, 21 in total, when I saw something different surface and there it was an Ice Duck! 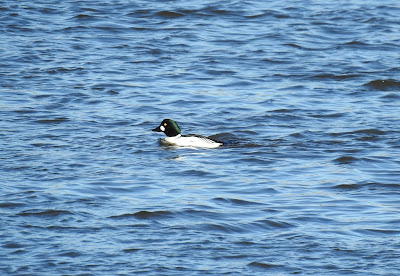 Ice Duck is a name given to Long-tailed Ducks in Northumberland and other local names from the around the British Isles that I like are Sharp-tailed Duck, Swallow-tailed Sheldrake and Sea Pheasant. And it is easy to see how some of these names have been derived when you think of the Ice Duck.

I had cracking scope views of the Long-tailed Duck all morning, but sadly she never came within camera range. Ah well, maybe next time!

Other than the Goldeneyes on the river I had eight Eiders and two Shags, and also a lot of Mallards that I haven't counted up yet. A couple of calling Rock Pipits, a flock of 47 Pink-footed Geese north and singing Skylarks from the dunes, and that was it. Time to head back south through the Borders where there was even more snow on the higher ground. 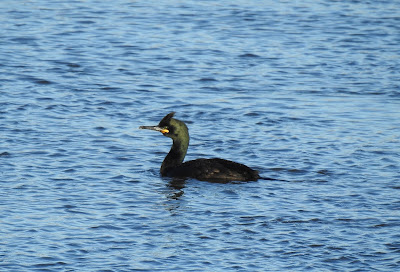 Shag
Posted by The Hairy Birder at 13:21 No comments: 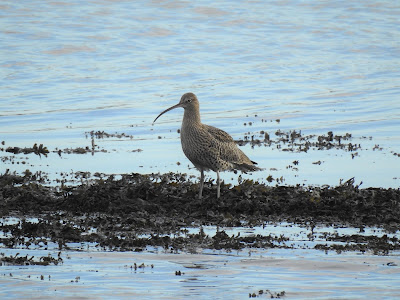 The forecast for the weekend...you've guessed it is for more wind and rain! Roll on spring, after all it is just around the corner!
Posted by The Hairy Birder at 20:00 No comments:

Back to back could refer to the past two glorious days I spent at Fleetwood Beer Festival, but it actually refers to two back to back survey days at my wintering bird survey site in west Lancs. Going back to the beer festival there were about 100 real ales on offer and I managed to sample about twenty of them, and very nice they were too!

The first day of my back to back surveys was on Wednesday, Wednesday afternoon to be precise under full cloud cover with a moderate southwesterly wind. It was most definitely quiet, the main feature again being the wintering Thrushes, with 223 Fieldfares and 40 Redwings. Associating with the Fieldfare and Redwings were Starlings, and in total I had 661.

As the afternoon drew on a few Buzzards took to the air and I recorded four over and past my watch point. The only other raptors were two Kestrels, and that was it. As I said, very quiet.

I was back the following morning and what a difference a day makes, as I was there at first light and it was glorious under clear skies and very little wind.

As I walked towards my watch point I flushed seventeen Mallards from the pond close to where my VP is located. As the Mallards headed away from me and started to climb, I noticed a raptor closing in on them. I lifted my bins and there was a female Peregrine giving chase! I didn't see the outcome, but I doubt very much that she was successful.

Later on in the morning I heard a Raven calling, looked up and I could see it perched on top of a close electricity pylon. This bird then flew off and a second bird flew into view. I love watching Ravens, and as this bird flew through the landscape it was contunually rolling, as Ravens often do, when all of a sudden the Peregrine appeared again and attmepted to mug the Raven! This bird was either extremely tenacious or very hungry. Again I didn't see the outcome, but surmised that it was another failure because a minute or two later I heard a 'rehk rehk rehk rehk' coming from the same pylon, and there perched near the top was the Peregrine. I trained my scope on her and I could see that she was a second calendar year bird, and she continued to call bobbing her head.

I took a few snaps of her, but the superstructure of the pylon was mostly in the way, and then she took to the air, flew round in a arc past my watch point and disappeared off to the south. Magic! 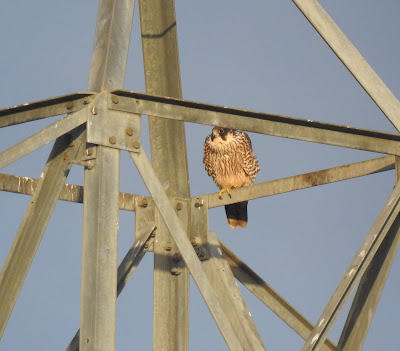 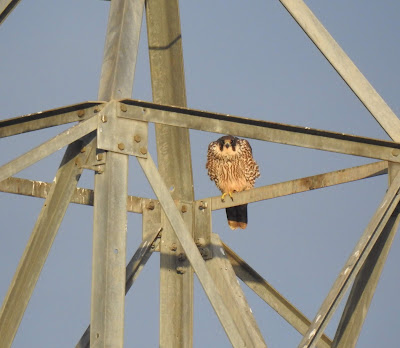 Fieldfares and Redwings made their presence felt again this morning with 204 and 39 respectively. Chaffinch and Song Thrush were both singing, and adding their voices to the growing number of early morning songsters. 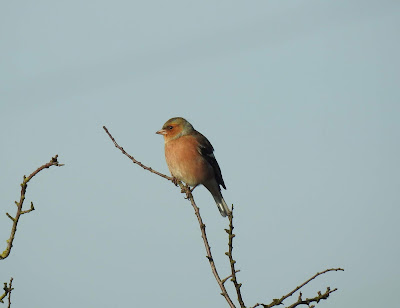 The light was crystal clear, and when two Great Sotted Woodpeckers flew directly over me (I'm not sure where they were heading!), the red on the vent and belly really stood out. Five Buzzards were in the air this morning, making use of late morning thermals as the sun warmed the ground. On my drive home I had a few Buzzards at various locations circling round and making use of the thermals.

Just one Kestrel today, and five Long-tailed Tits later my stint was over, and I headed home with thoughts of the 38th Fleetwood Beer Festival that evening!

Over on the right you will see that I have updated the ringing totals for our group, Fylde Ringing Group. The only species to be ringed in any nymbers in January was Linnet with 31, courtesy of Phil and Andy.
Posted by The Hairy Birder at 21:36 No comments: