For the past two days I have been down in Merseyside carrying out a wintering bird survey on some farmland habitat in the main, and it's been a mix of transects and vantage points.

Pink-footed Geese have been the main feature and it was interesting watching the behaviour of some yesterday. A group of 1450 dropped in to some stubbles at 0730 and at 0815 a thousand of them left. Doing the maths this left 450, and at 0820 a further 400 left, leaving fifty. Then at 0825 50ish left, leaving a single bird on its own. This bird stood in the stubble, neck outstretched for some time. Why it decided to remain I don't know. After a while I got distracted by a Buzzard, and after the Buzzard had flown by I noticed that the lone Pinkie had gone! Very odd! 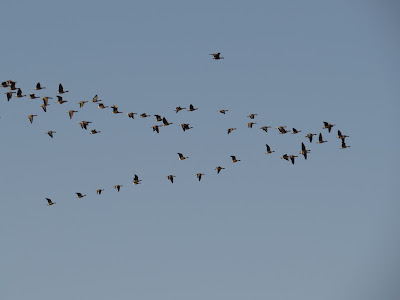 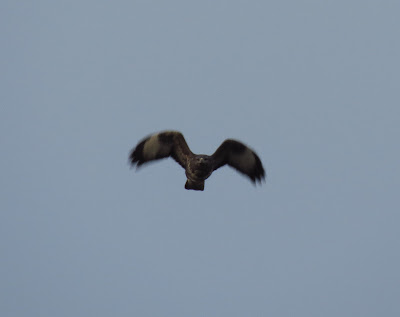 The weather both days was good, although it was a bit cloudy at first yesterday morning, but by the afternoon and for all of today it was glorious, with crisp sunshine and blue skies.

The plan is to set up my feeding station in the water treatment works tomorrow and then on Saturday afternoon some ringing at the Pied Wagtail roost weather permitting!
Posted by The Hairy Birder at 22:40