Bardas On the Boardwalk

Towards the end of last week I had the penultimate site survey to do for the second round of breeding bird surveys I am doing, and it was a site near Kendal. The weather was glorious with clear skies and virtually no wind. I knew I was going to call at Foulshaw Moss after I had finished my survey so I was looking forward to that.

I didn't record anything earth shattering during my survey, but nevertheless it is still all important data, but what I did record included a singing Garden Warbler, a Great Spotted Woodpecker, two Tree Sparrows, a singing Chiffchaff, three Song Thrushes (including two juvies) and two Willow Warblers. What I haven't told you about is the juvenile Blue and Great Tits, the juvenile Blackbirds or the female Blackbird carrying food, which is what the surveys are really all about.

It was on to Foulshaw Moss and I was hoping for some Common Lizzard action, but I was mindful of the fact that it was just before 8:00 am and it might not yet have been warm enough for reptiles. I walked along a section of boardwalk where I recorded Common Lizzards last time I was here, and low and behold I had a couple of Common Lizzards! Then something caught my eye moving along the boardwalk, and it was an Adder! Or Marlies, Prags or Bardas if you prefer! 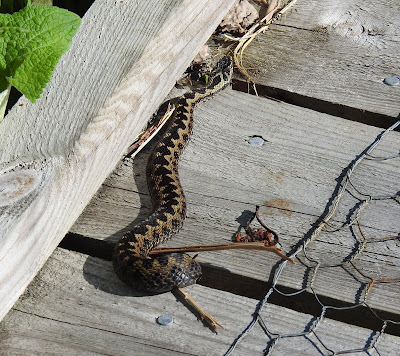 The Adder moved quickly ahead of me and dropped through a gap in the boardwalk. I rattled a few shots off, and the best of these you can see above. I was as pleased as punch!

I think I have probably said before that the reserve is lowland raised bog and is managed for its botanical and invertebrate diversity and it is all about keeping it wet, and as such there are a number of glorious pools. Associated with bogs is Birch scrub, which is managed to prevent it drying the bog out, but it all adds up to some great habitat for birds too, especially wetland species. 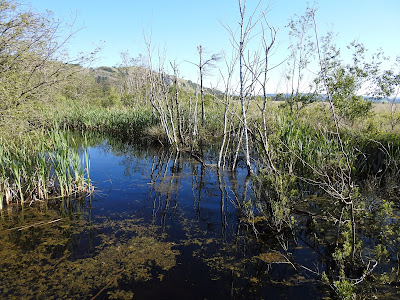 I was scanning the open moss over towards a conifer woodland and noticed a number of Swifts flying above the conifers. I counted them and was surprised to count 84 birds! They were obviously hawking a hatch of some aerial insects and I wondered how far some of them travelled to exploit this food source.

Over on the right you will have noticed that I have updated the ringing totals for Fylde Ringing Group up until the end of June. Eight new species for the year were ringed in June and these were Sand Martin, Sparrowhawk, Barn Owl, Swallow, Kestrel, Whitethroat, Cetti's Warbler and Reed Warbler.

Below you will find the top 3 species ringed for the month and the top ten 'movers and shakers' for the year.