Yesterday Gail and I continued are monitoring of our Pied Flycatcher boxes in the Hodder Valley in Bowland, and rather pleasingly we managed to record 4 out of the 10 males. We use a trap that holds the bird in the nest box when it comes in to feed the young. We then lift the adult out of the box, fit a ring, or record the details if it is already ringed, as is often the case, take various biometric data, and safely release the bird to get on with rearing those gorgeous Pied Flycatcher chicks. 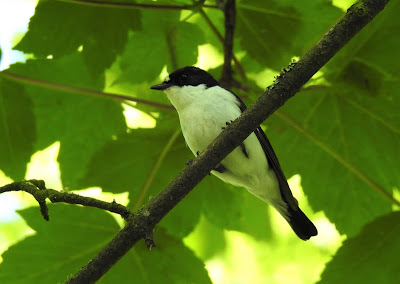 Out of the four males that we trapped yesterday, only one was new, the other three were already ringed. One was ringed as a chick from a box at our site in 2019, one was ringed as a chick at this site in 2016 and the third ringed bird was ringed elsewhere. Data like this is hugely important for the conservation of this red-listed species, as it is essential that long-term monitoring is undertaken to base sound conservation policies on, such as climate change adaptation as the range and nesting strategies change for Pied Flycatchers. But there is of course just the sheer amazement of what these birds achieve on an annual basis.

Take the male ringed in one of our boxes in 2016. We know exactly where he hatched, and therefore we know exactly how old he is. On 30th May 2016 Gail and I checked box number seven at our site, and it contained 6 naked and blind Pied Flycatcher chicks (including our male), so I know that he will have hatched on or around 25th May 2016, making him more or less 4 years old to the day! By the way, he was nesting in box number 37 this year.

Pied Flycatchers weigh an average of 13 g, and winter in West Africa south of the Sahara, so that male has crossed the Sahara an incredible eight times! We ringed 44 Pied Flycatcher chicks, and we have twenty chicks to ring next weekend. 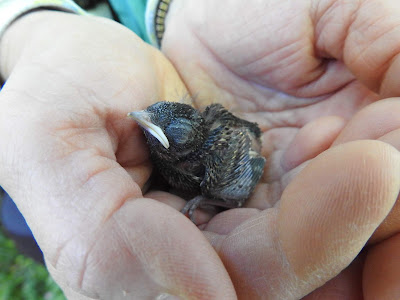 Pied Flycatcher chick(s) (above & below) 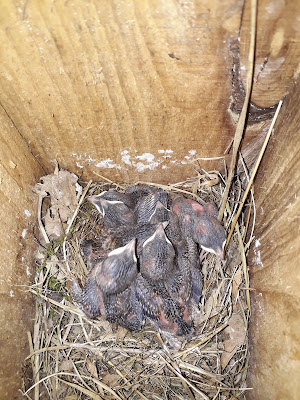 In addition to the Pied Flycatchers we ringed seven Blue Tit chicks and eleven Great Tits. Other species that we recorded as we wandered round the woodland included Raven, Buzzard, Blackcap and Chiffchaff.

As I have been busy recently with bird surveys for work, I haven't run my moth trap as often as I would like. However, on Friday morning I trapped two Garden Carpets, five Heart and Darts, two Brimstone Moths and a White Ermine. This morning in the trap was a stunning Elephant Hawkmoth, five Heart and Darts, two Common Pugs, a Green Pug and a White Ermine. Still quiet, but I like it like that. 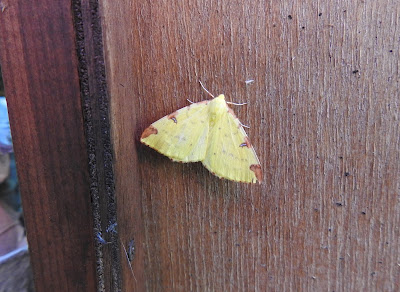 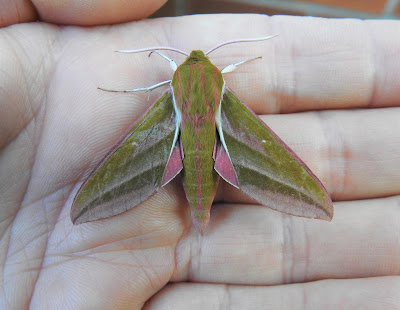 Elephant Hawkmoth (above & below) 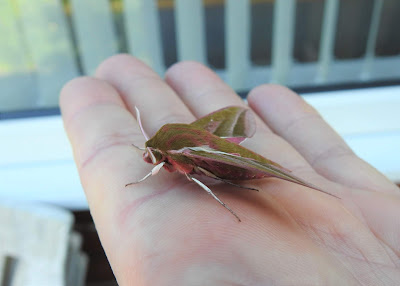 I don't know whether I have mentioned it before, but I have a pair of Blackbirds that visit my garden regularly, and at the moment I have been watching them collecting food, so they have a nest with young somewhere. Anyway, the reason I mention this is that I took a couple of pictures of the female recently at the bird bath, and you can see them below. 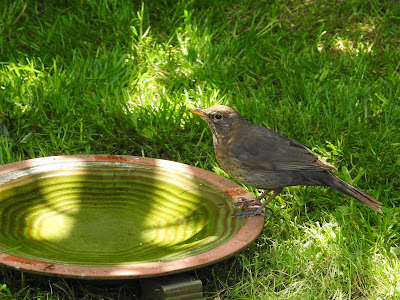 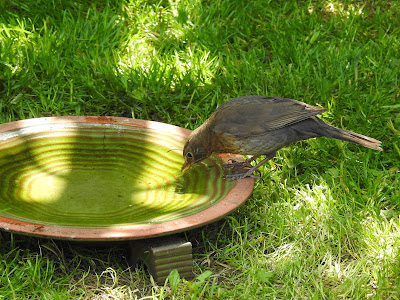 I am hoping to get out ringing in the Obs reedbed over the next couple of days, and I'll let you know how I get on if I do.
Posted by The Hairy Birder at 15:07