Saturday morning was glorious, with clear skies and a light south-easterly wind, and as there was a tide, I headed to the Point for a bit of a sea and a vis watch. However, if I fast forward an hour and a half, I was walking away from the Point and I bumped in to Ian who said to me "that's not a good sign", and I replied, "it was crap"! Ian asked me whether that was the sea or the vis, and I said both! So, what happened?

Even though it was a glorious morning, there was a heat haze at sea, it's often the case at this time of the year when you get the temperature variation between the relatively warm sea and the cold air, making any observation of birds difficult. The crystal-clear conditions vertically, meant that virtually all of the vis was so high, that it was undetectable. 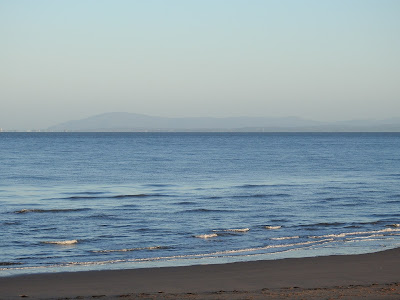 In fact, the only vis that I recorded were two Grey Wagtails and six Skylarks that were barely visible! The sea was equally quiet with just nine Eiders, 33 Common Scoters, a Red-throated Diver and five Shelducks. An Atlantic Grey Seal bobbing up and down as the tide ran in, could also be added to this list.

I decided to have a look in the cemetery, just in case there was anything of note migrant-wise, although I knew there wouldn't be! Looking resplendent in the morning sunshine were three Small Copper butterflies, that actually made my morning! Every time my shadow passed over them as I tried to get closer with my camera, they were off! So, I had to stretch my arms out not to cause a shadow, and to get the sun behind my camera. 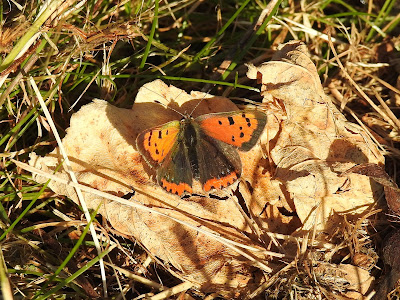 Small Copper
As I was watching the Small Coppers, all the Starlings started alarm calling, and a male Sparrowhawk shot through; superb! I never tire of observing these cracking little raptors! I had another barely visible group of seven Skylarks heading south-east, and in addition to this a Greenfinch, five Alba Wags and a Chaffinch headed in the same direction.
Surprisingly there was two grounded migrants, two Goldcrests!
Yesterday, I was at the pools before first light for a ringing session, and as I unloaded my gear from my car under six oktas cloud cover with 5 - 10 mph SE wind, I could hear Redwings calling. I don't know how many were involved, I could just hear them. Even though they are heralding the approach of Winter, I do love to see and hear them at this time of year. In fact, they epitomise Autumn to me!
The Starlings are still roosting, and numbers might have just crept up a bit, as I had two waves of about 2,500 birds exiting the roost, so 5,000 roosting is a tad more than last time.
Probably as a result of me parking fairly close to the scrape in the half-light, I spooked the 70 or so Greylag Geese that were roosting on the scrape, and in fact that is the first time that I have known Greylags to roost on there. Talking of geese, for the first hour that I was on site I could hear Pink-footed Geese calling, probably moving on from their estuarine roost. Then I had a group of 73 birds that looked to be dropping on to fields on the other side of the river, and then c.500 birds were in the air, presumably flushed by something or somebody!
I had very little vis, again, so two different days, but still little vis. The vis I did record comprised of an Alba Wagtail, two Grey Wagtails, 26 Woodpigeons, a Carrion Crow, seven Greenfinches and two Linnets.
The only grounded migrant I had was a Goldcrest, and a Great Spotted Woodpecker and six Long-tailed Tits made it into my notebook.
I ringed twenty birds as follows:
Robin - 1
Cetti's Warbler - 2
Great Tit - 2
Chaffinch - 2
Goldfinch - 1
Coal Tit - 3
Blue Tit - 3
Greenfinch - 6 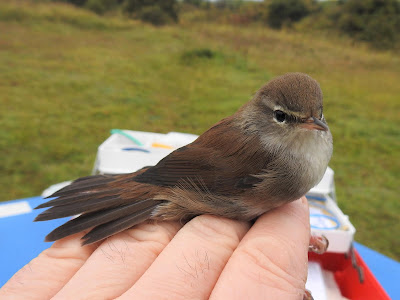 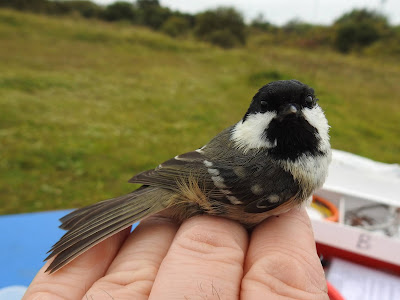 Coal Tit
I was going to go to the pools ringing again this morning, but when I got up at 5:45 a.m. I could see that it was quite foggy, and this would lead to next to no birds, and soggy nets, so I saved it for another day.
Posted by The Hairy Birder at 14:57