I've had two mornings of ringing at the pools yesterday and today, and it all started with a, or I should I say the, 'Latvian love song'! The Latvian love song that I refer to, is a recording of Redwing song and calls that has proved over recent years very effective in attracting migrating Redwings for the purposes of ringing. I thought I had a copy, but I didn't, so my good friends Pete and Peter (father and son ringing team) furnished me with a copy in quick time. Thanks guys!
As I was putting my mist net poles onto the car in the dark yesterday morning, I could hear migrating Redwings calling in the darkness, and I thought "this bodes well". I put a couple of nets up in the dark, and put on the 'Latvian Love Song' and retired to my car for a coffee. As dawn broke, I was greeted with two oktas cloud cover and a light north-easterly wind.
Before I headed off on my first net round the Starlings came out of their roost, and their numbers had increased to about ten thousand birds. The last time I counted them out, I thought their numbers had been dropping. Perhaps it fluctuates.
Two Cetti's Warblers serenaded me with their explosive calls, and overhead Thrushes were on the move. I counted 220 Redwings, a Mistle Thrush, 32 Fieldfares, three Blackbirds and two Song Thrushes all heading east. Between net rounds, I managed to count other bits of vis as well, and moving between north and south I had 25 Chaffinches, three Bramblings, 31 Jackdaws, two Carrion Crows and thirteen Whooper Swans. 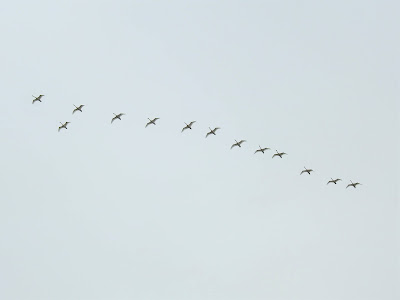 Whooper Swans
Raptors were represented by a single species, Sparrowhawk, and I had at least three, including a lovely adult male that shot past me when I was at the ringing table. I say at least three, because later in the morning I had three thermalling to the west, and this may have included the adult male. Two Goldcrests and a Brambling made up all of what I would say were grounded migrants, but it is difficult to tell.
I ringed 40 birds as follows:
Blackbird - 2
Wren - 1
Goldcrest - 1
Redwing - 15
Song Thrush - 1
Cetti's Warbler - 2
Robin - 1
Greenfinch - 14
Dunnock - 1
Reed Bunting - 1
Great Tit - 1 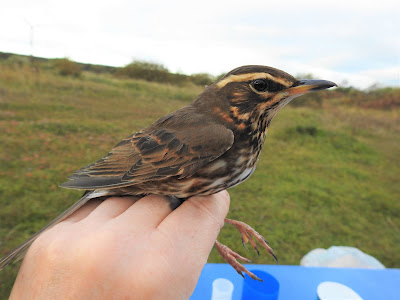 Redwing
I was back again this morning with Graham, and this time we put three nets up, and day two for the Latvian love song ensued. It was a different morning weather-wise with full cloud cover at first light, and a 5-10 mph north-easterly wind.
It was obvious that there wasn't as many birds on the move, and even the Starling roost looked to have dropped in numbers to about 5,000 birds. But as I said before, maybe it fluctuates.
On vis we had 56 Redwings, 49 Jackdaws, a couple of Grey Wagtails, four Skylarks, six Chaffinches, two Rooks, just one Fieldfare, thirteen Greenfinches and 30 Pink-footed Geese.
We didn't get chance to look on the pools properly, but we did see three Shovelers wheeling round, and a group of 20-30 Snipe. A female Sparrowhawk and two Ravens were also noteworthy.
We ringed 33 birds as follows (recaptures in brackets):
Robin - 2
Cetti's Warbler - 2
Great Tit - 1
Blue Tit - 1
Goldfinch - 1
Chaffinch - 3
Redwing - 6
Song Thrush - 2
Dunnock - 3 (1)
Greenfinch - 6
Long-tailed Tit - 4
Wren - 2
Reed Bunting - (1) 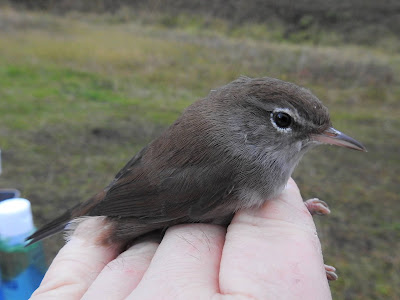 Cetti's Warbler
The forecast is looking good over the next couple of days, with the wind remaining in the east, so it looks like a couple more early-ish starts for me!
Posted by The Hairy Birder at 18:29