A Bit Quieter This Time

I was back in the reedbed and scrub at the Obs this morning, for another ringing session, and it was a bit quieter this time. I arrived on site at 4:45 a.m. and snapped the sunrise over the estuary, and put just two nets up. It was perfect conditions for ringing, with 7 oktas cloud cover, and it was flat calm. 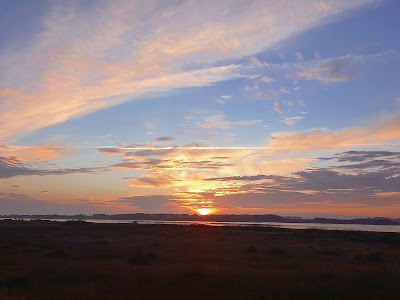 Sunrise over the estuary
I only managed to ring eight birds as follows:
Cetti's Warbler - 2
Blackcap - 4
Great Tit - 1
Robin - 1 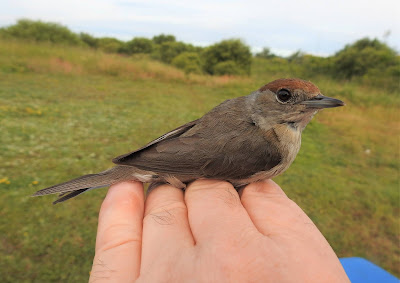 Female Blackcap
The two Cetti's Warblers were juveniles, as were three of the Blackcaps, with the fourth being an adult female with a brood patch. Even though it was just eight birds, I was pleased with the make-up of species. 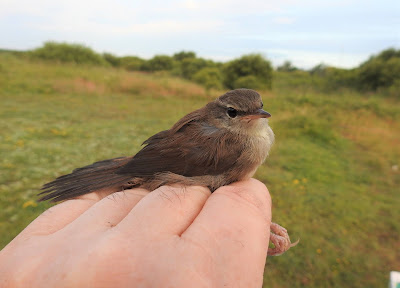 Cetti's Warbler
No young Acro's as yet, but I expect the first young Reed and Sedge anytime soon. A few Swifts and House Martins hawked for aerial insects, but not in any numbers. A couple of Sedge Warblers and Whitethroats were singing close to the ringing station, and a flock of twelve Goldfinches were in the same area.
Out on the scrape were five juvenile Moorhens, along with two adults, and four juvenile Coots with two adults as well. Other than that, the scrape was very quiet.
I'm in deepest, darkest Notts tomorrow finishing off a breeding bird survey, and hopefully back at the reedbed ringing towards, or over the weekend.
I think one of everybody's favourite birds has to be the Puffin, so it was worrying to see the headline in May's British Birds of Lack of prey is causing Puffin chicks to starve in the News and comment section. 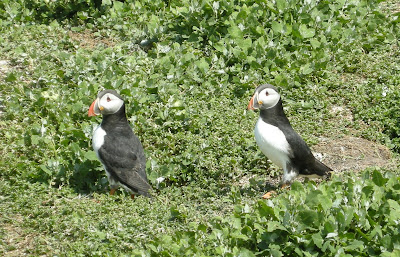 Puffins
Puffins in the northeast Atlantic have been in decline for decades, and one example cited of a Norwegian colony on the Rost archipelago, formerly home to one million pairs, has declined by over 80% since the 1970s!
To try and identify the mechanisms causing poor breeding success in declining populations, a team of scientists studied and compared the feeding behaviour of four different Puffin populations with contrasting success in Iceland, Norway and Wales. To do this, they used GPS loggers to track the feeding movements of Puffins from their study colonies. By combining the GPS tracking data, footage from camera traps near their burrows, and DNA analysis of the birds' droppings, they were able to explore where the Puffins were feeding, how often they fed their chicks, and what prey they were eating.
The results showed that at the colonies with poor breeding success, the Puffins needed to fly much further afield to find food (round trips of over 100 km) than at more successful colonies. These longer journeys required the parents to spend more time in flight, and cause the chicks to be fed less often. The birds also brought back smaller fish and fed on lower quality prey, which caused many chicks to grow less well or starve.
These results indicate that a lack of prey near some Puffin colonies in the northeast Atlantic has a major impact on the breeding success of these colonies, leading to population declines. Climate change is partly responsible for this lack of prey, with changes in currents and sea temperatures affecting the abundance and availability of fish that the Puffins require to rear their chick.
This study highlights the huge impact that climate-driven changes in prey availability can have on seabird populations. It is also likely that the effects detected in Puffins are also likely to occur in other species as well. Very worrying indeed!
Posted by The Hairy Birder at 10:51