If you are reading this in the web version, as opposed to the mobile version, you will see over on the right that I have updated the ringing totals for Fylde Ringing Group up until the end of August 2021. And I still haven't managed to get the totals to run down the page as a list!
Only one new species was ringed during August for the year, and that was a Redstart. The only two species to move up the table were Blackcap from 7th to 6th, and Reed Warbler straight in to 9th place.
Below you will find details of the top two species ringed during August (it was a quiet month due to the weather), and the top 10 'movers and shakers' for the year.
Top 2 Ringed during August
1. Linnet - 38
2. Reed Warbler - 19
Top 10 Movers and Shakers
1. Lesser Redpoll - 158 (same position)
2. Sand Martin - 123 (same position)
3. Blue Tit - 113 (same position)
4. Linnet - 98 (same position)
5. Great Tit - 58 (same position)
6. Blackcap - 52 (up from 7th)
7. Chaffinch - 50 (down from 6th)
8. Goldfinch - 42 (same position)
9. Reed Warbler - 37 (straight in)
10. Robin - 34 (down from 9th)
I've received lots of enquiries and kind words regarding my shoulder, and I thank you all for that. It's still bothering me a little, but nowhere near as much, and 'touch wood', I should be out birding and ringing this coming week!
On this date (5th September) in 2008, I made my first 'feed' drop of the 2008/09 winter at my feeding station on Rawcliffe Moss. The weather was very different to today, and it was most certainly dreich, with cloud and light rain. Brown Hares were very much in evidence, and I encountered five as I was putting out the seed. 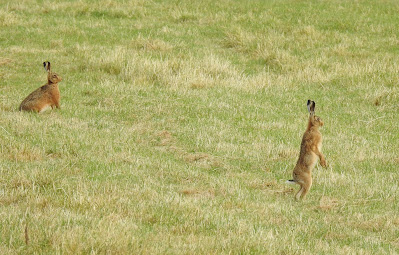 Brown Hares
Grey Partridges used to hang on at this farm, probably as a result of the mixed farming, spring cropping, network of hedges, and options employed under a Higher Level Stewardship scheme. And on this morning, I had a pair close to where I used to put the seed out.
My notebook reminds me that Marsh Harriers were the highlight of the morning, and I had an adult female and a sub-adult male. The female Marsh Harrier was hunting over the 'big field', and it started to get mobbed by a Carrion Crow. However, the Harrier wasn't as docile as the local Buzzards, and would only put up with so much mobbing by the aggressive Corvid, before it retaliated, and drove the Crow away!
Talking of feeding stations, I am hoping to run a feeding station at our good friends Robert and Diana's farm this winter. Robert and Diana have a good population of Tree Sparrows at the farm, and it will be good to see if we can catch and ring a few adults of this red-listed species. 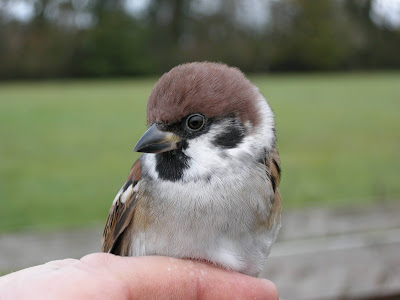 Tree Sparrow
Posted by The Hairy Birder at 20:04