It's been just over two weeks since my last post, but I have been out and about communing with nature, and that's the reason that I haven't posted for a while, I've been busy with surveys. I just wanted to mention this, as this post might end up being a bit long as I play catch-up.
At the moment, here in the UK, we have lots of Vikings arriving on our shores in the form of wintering thrushes from Scandinavia, and since the 4th November I have seen over 700 Fieldfares and 1100 Redwings. Most nights of late, if you step outside after dark, you will hear the 'seep seep' calls of migrating Redwings, with a few Blackbirds thrown in for good measure. I've also been hearing Pink-footed Geese and Whooper Swans as well, more Vikings from Iceland. 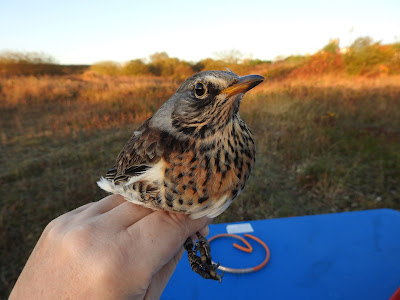 Fieldfare
I had my first Fieldfares of the autumn on the 4th November when I was undertaking a wintering bird survey at one of my sites in northwest Lancashire. It was a lovely clear morning, with a light northerly wind, and at first light I had a flock of 15 Fieldfares heading north. They were perhaps heading into wind, or reorientating to head towards their favoured wintering area. I also had 302 Redwings during the morning, and they too were heading in a general northerly direction.
Small numbers of Pink-footed Geese moved through during the morning and I had 262 moving in various directions, depending on whether they had roosted on the Ribble or Wyre estuaries. There are a number of ponds on this site, and my notes for Wigeon and Teal say 2+ and 4+ respectively, which basically means I heard Wigeon calling from two ponds and Teal from four!
The fishing lake held 29 Coots and 35 Mallards, but no singing Cetti's Warbler on this morning. Talking about water, there wasn't half a lot of flood water about after all the rain we have been having of late, and this led to a count of ten Snipe on an area of flooded arable land. The only other wader species that I recorded in any numbers, was a flock of 37 Lapwings heading north. 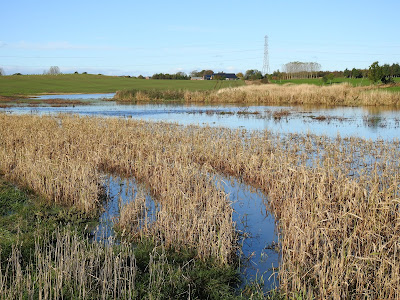 Flooded arable land
Raptors were represented by a couple of Buzzards, and the now regular Peregrine keeping watch from an electricity pylon. There were still plenty of Skylarks in what remains of the stubbles, and I counted 40, along with a Tree Sparrow, 17 Chaffinches, twenty Linnets, seven Goldfinches and four Reed Buntings.
On 5th November, I had a site visit in north Lancs, where I am working with a friend from the Wildlife Trust, producing a seasonal nature trail for a landowner. The idea is that people staying at the self-catering cottages can walk on self-guided trail around the farm. As we walked the trail after lunch, and updating it for the autumn/early winter version, we encountered at least 120 Fieldfares and 50 Redwings here too. And as has been the case at all of the sites where I have recorded these Viking thrushes recently, there were a few continental Blackbirds, and one or two Song Thrushes with them as well.
The following day, Alice and I went to our friends Robert and Diana's farm near Garstang to locate where we will operate a winter feeding station from over the next few months. We found a good location between the end of an area of woodland and the adjacent hedgerow, where Robert will put two posts into the ground for us to mount our two 20 kg, six port feeders on.
Afterwards, we had a look on the wetland, and we had a good count of wildfowl. There were 233 Teal, 16 Shovelers, 47 Wigeon and 30 Mallards. A small group of eight Whooper Swans headed south, but they weren't tempted to call in at the wetland. Here too, were some more winter thrushes with 20 Fieldfares and 200 Redwings. The oak tree photographed below, against a brooding sky had a number of Redwings perched in it just prior to me taking the picture. 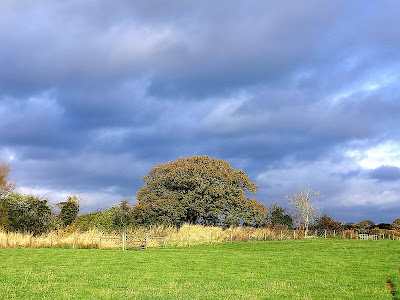 Brooding sky
A few days later found me on my client's farm in Bowland, where I was checking some of the breeding wader fields, and whether they needed much winter grazing on them between now and the end of the year, and also to have a look at the complex of scrapes that John had put in for the breeding waders. 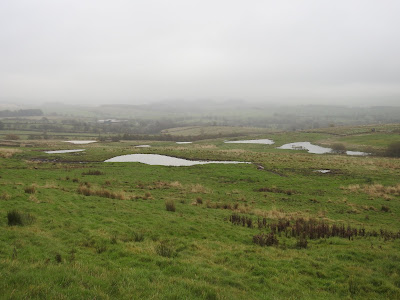 The complex of scrapes above (it was a murky mornng), and one of the
scrapes a bit closer below 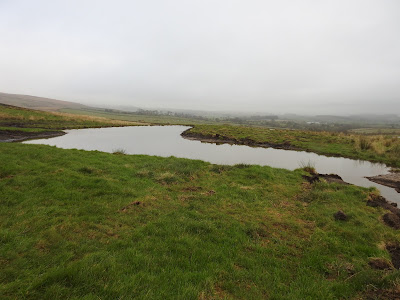 I had a new species for me for the farm, when a Bullfinch flew over calling, heading northeast. A pair of Stonechats were in a rushy pasture, and three Jays were noisily making their presence felt. There were 140 Fieldfares and 30 Redwings here as well, and a couple of Bramblings were additional Viking visitors.
The 10th saw me at another of my northwest Lancs survey sites, and I had to sit out some fairly hefty showers early on, but they soon cleared, although it remained overcast. On the recently seeded arable fields Brown Hares were fairly numerous, and I had at least ten of these gorgeous mammals.
Very few Pink-footed Geese moved over, and all I had were 217 heading south. There was still a few Woodpigeons in the hedges and fields, and I counted 98 along with a just a couple of Stock Doves. Five Grey Herons in various locations on my map was notable, but just how many individuals were involved I'm not sure.
Raptors were represented by a single Buzzard and a male Kestrel. I had been at my second VP for a while, and I had the feeling that something was watching me. I turned round and looked up, and a Buzzard was on top of a pylon with a firm gaze fixed in my direction!
There might have been a handful of migrants around on this morning, because in addition to the two Song Thrushes, two Mistle Thrushes, four Blackbirds (at least one continental male), 256 Redwings and 392 Fieldfares, I had two Goldcrests and a calling Chiffchaff. Can I stretch this to call it a mid-November fall? Funnily enough, I had another Bullfinch here, again my first for the site, that went over calling, heading southeast.
Last Saturday I was back at Robert and Diana's farm to put out my 'monster' bird feeders. Robert fitted the brackets to the posts, and the feeders were duly filled and latched on to the brackets. We then headed to the field over-looking the wetland, and as we started looking through and counting the wildfowl, Black-tailed Godwits started to drop in. They were dropping in and feeding in the short-cropped grass along the edge of the wetland, and they fed like mad for a good while, probing the ground with their long sensitive bills, as if they were stitching something invisible to the ground. An impressive 436 of these long-legged Vikings from Iceland graced us with their presence! 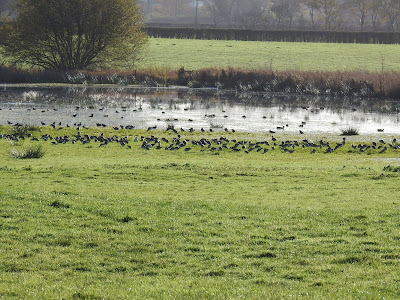 Black-Tailed Godwits (above), and shaky video below! 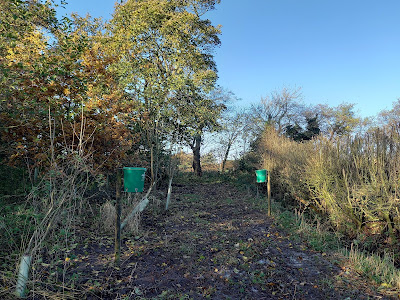 The feeding station (above), and Peacock butterfly (below) that was on the
wing during the warm morning conditions 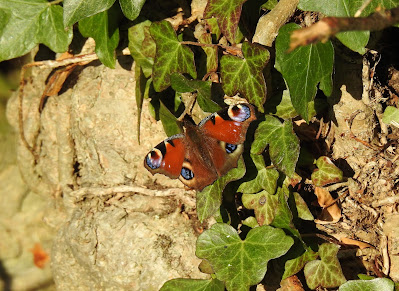 Sunday morning found Alice, John and I at the Nature Park for a last ringing session of the year there, unless there is a Pied Wagtail roost later in the winter. We got there before first light, to get a couple of nets up in the dark in readiness for hopefully some more thrushes. Under four oktas cloud cover, with the slightest of easterly breezes, we switched the MP3 players on, and headed to the ringing station to drink coffee and watch the sun rise, and a fairly spectacular sunrise it was too! 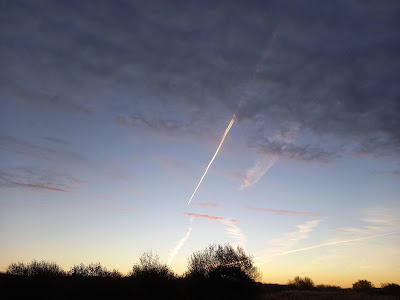 Sunrise at the Nature Park (above & below) 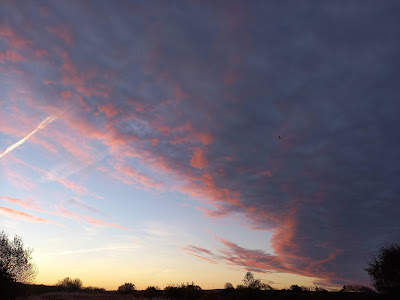 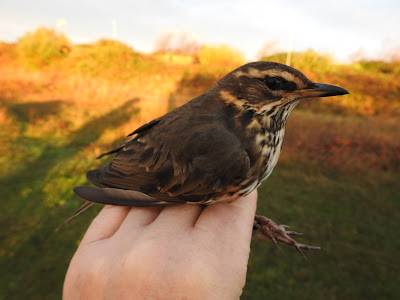 Redwing
Before it was light, we could hear the magical calls of Pink-footed Geese from their roost site out on the estuary. The sound increased, almost to a cacophony, as these stonking birds greeted the rising sun with excited calls, and headed out to their chosen feeding areas. They must have mainly headed east, as only about three hundred departed to the southwest. In fact, there a are a few fields, that are only a few flaps away from the Pinkies roost site, and it would have been to these fields that these three hundred birds were heading. We had a further 172 over later in the morning, heading east over the river.
As I said before, the MP3 player performing the 'Latvian Love Song' for the Redwings pulled in 247 of these northern birds, along with nineteen Fieldfares, three Song Thrushes and four Blackbirds. At one point earlier in the morning, we had a British race of male Blackbird alongside a continental male, and it was educational to see both alongside each other.
We didn't really detect any vis other than 28 Woodpigeons west and 31 Jackdaws south, although the twelve Greenfinches that we pulled in for ringing would have been moving beyond the range of our sight and hearing. The best of the rest included a Little Egret and a female Stonechat. 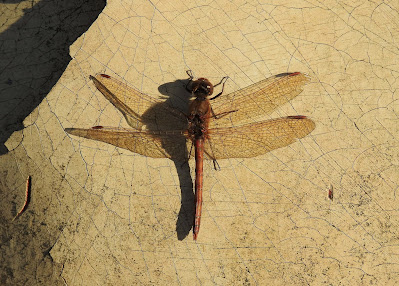 When we packed up towards lunchtime it had warmed up, and a number
of insects were on the wing like this Common darter
I've got more surveys this coming week, topped off hopefully with a ringing session at our newly set-up feeding station.
On 14th November 1993 I had a bit of a shock when I was ringing at a finch and thrush roost on my own, at a site near Clifton, Preston. It was a former large country house, with associated woodland and mature Rhododendrons along the drive and formal paths. And it was these 'Rhodies' that provided the perfect structural habitat for wintering finches and thrushes to roost in. The main target species for ringing at this site, was the sometimes large number of Chaffinches that roosted here.
As I said before, I was on my own and I had put up four 60-foot mist nets. In those days I used to make a note of which nets the birds had come from, and on this afternoon 28 years ago I can tell you that 30% of the birds ringed came from the 'south tree drive net', 21% from the 'north tree drive' net, 31% from the 'south gate drive' net and 18% from the 'green gate' net!
It was a bird from the 'south gate drive' net that caused all the excitement, and it was a humble Reed Warbler, a first calendar year bird in fact. Reed Warblers of course aren't rare, but 14th November is a very late date indeed, and it had come from a net that was in front of a line of Rhododendrons, that were in turn on the edge of some broad-leaved woodland. Most unusual!
This was before mobile phones of course, and I wanted somebody else from the group to make sure that I was right, and it was indeed a Reed Warbler and not a rare Acro. I had to furl my nets, drive in to the village to the phone box, and make a few phone calls. The nearest group member to the site was Graham, and he was only ten minutes away, which was perfect, as it only meant keeping the bird for a short period of time. We checked the emargination on P3 relative to the wing, the notch on P2, emargination, primary projection and P2 to wing tip, and all looked spot on for Reed Warbler. Phew! This late migrant was ringed, and released, and sent on its way. I wondered what would happen to it. Would it make it to Africa, or would it winter perhaps somewhere a little bit closer, who knows?
In case you are interested I ringed 32 birds that afternoon/evening, and these were a Goldcrest, a Song Thrush, the aforementioned Reed Warbler, 18 Chaffinches, 4 Blackbirds and a 2CY Sparrowhawk. All good stuff!
Posted by The Hairy Birder at 20:11