Thursday afternoon found me at one of my arable northwest Lancs wintering bird survey sites, under two oktas cloud cover, with a biting 2 - 3 NNW wind. And boy was it cold! That's the problem when you're standing still for several hours at a VP! In fact, I am looking at getting some of those heated socks; I must be getting old! I had some fairly good birds, including one that got away (more of that later), and some lovely skyscapes.
I'll start off with the skyscapes, with a series of pictures below illustrating how varied and quite spectacular they were. I was hoping for a decent sunset, but as the sun dipped towards, and below, the horizon, it just didn't happen. 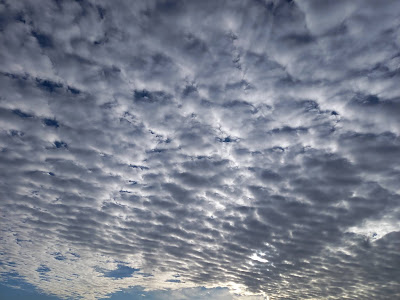 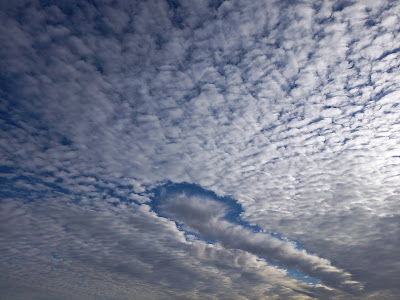 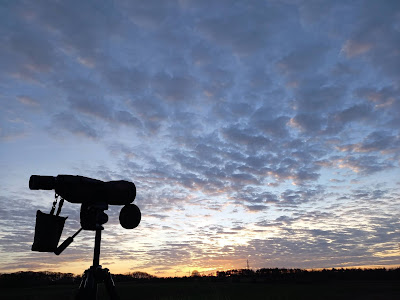 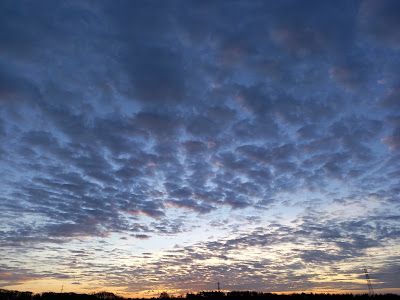 Not so many Brown Hares this afternoon, but nevertheless it was good to see at least two. Just to the north of my survey site, about 400 Pink-footed Geese kept lifting and dropping back down to feed, but they didn't budge from where they were feeding. A few Pinkies, 176 to be precise, flew over in different directions and in differing sizes of skeins. 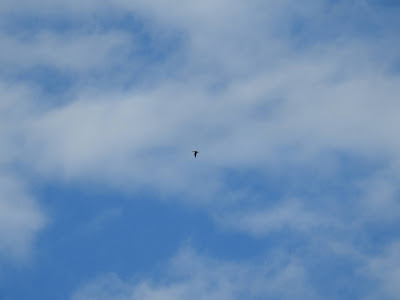 I picked this lone Pink-footed Goose as it flew high and north, and this is about
the same view of it as I had. I just thought it made a good image against the sky.
There was still quite a few Woodpigeons feeding in the stubble turnips, somewhere in the region of 115, alongside seven Stock Doves. Good numbers of Jackdaws and Rooks were either in the stubble turnips with the Woodpigeons, or else on an adjacent field of winter wheat, and they numbered 298 and 150 respectively. Later I watched them fly to some local woodland to roost.
A few Redshanks surprised me, and they were a new addition to the site list, the first being a flock of five that looked as though they were going to land on a fairly open pond in some stubbles, but they flew on instead. Every time I walk past this pond on my way to my first VP location, I walk close enough so I can see all the margins as it looks good for a Green Sandpiper or two. I then had four fly north, and a single bird on a field of fairly recently sown winter wheat. The second of three new species for the site, was also a wader, in the form of a single Jack Snipe. It did that classic Jack Snipe thing; flushed when I was nearly on top of it, and then didn't fly very far!
The third new species for the site, was a cracking female Merlin that belted east past me at a rate of knots. You can't beat a Merlin. Other raptors that made an appearance were three Buzzards and two Kestrels.
There are still quite a few Skylarks in the stubbles and this afternoon I had 46. The movement of thrushes seems to have finished now, but on my travels around the site I recorded four Song Thrushes, four Redwings and 38 Fieldfares.
The bird that got away was at the end of my survey towards sunset. I heard a bird calling, and my brain, very casually just for a nano-second, said "Yellow Wagtail!" Of course, in that split second, I was telling myself not to be stupid as it was the 2nd December, and then it called again, and I noted that it had a harsh quality to it! I struggled to get onto the bird as it was obviously fairly high, but I did manage to get on to it as it was flying away from me, and into a bright sky lit-up by a setting sun, and all I can say is that it was a wagtail! Frustrating, but that's how it goes sometimes!
I was supposed to be ringing at the feeding station tomorrow morning, but it is forecast to be too breezy, so I'll still go and top the feeders up and see what's coming in to feed.
Over on the right you will see that I ahve updated the ringing totals for Fylde Ringing Group up until the end of November. Only one new species for the year was added during November and that was a single Fieldfare.
Below you will find the top 5 ringed for November, and the top ten 'movers and shakers' for the year.
Top 5 Ringed During November
1. Linnet - 80
2. Redwing - 36
3. Greenfinch - 32
4. Blue Tit - 16
5. Long-tailed Tit - 15
Top 10 Movers and Shakers for the Year
1. Linnet - 310 (same position)
2. Lesser Redpoll - 161 (same position)
3. Blue Tit - 160 (same position)
4. Sand Martin - 123 (same position)
5. Greenfinch - 114 (up from 6th)
6. Goldfinch - 111 (down from 5th)
7. Chaffinch - 94 (same position)
Great Tit - 94 (same position)
9. Meadow Pipit - 81 (down from 7th)
10. Redwing - 75 (straight in)
Posted by The Hairy Birder at 17:17