Breaking Radio Silence With Three In One

I do apologise for my lack of posts of late, but it's because I have been so busy in the field, I haven't had time to sit at my computer and update my Blog. I'm not complaining, as I would rather be out in the field, and not have enough time to catch up indoors, rather than the other way round. In fact, I have been so busy, that I haven't even had time to send the results of all my surveys in. Hopefully, I will remain behind with that, because if I did catch up it would mean that the weather would have been awful, preventing me from getting out. So, I apologise once again, because my next few posts will certainly be playing catch-up!
The 'three in one' that I refer to, are three wintering bird surveys that I completed in mid-January at three of my sites in northwest Lancs. On the 11th January I was stood under 4 oktas cloud cover, with a light NNW wind, and I was counting geese. Three species; one wild/native and two domesticated. These were a single Canada Goose, 30 Greylag Geese heading north, and 1,312 Pink-footed Geese heading anywhere between south and east, but mainly north.
There are several ponds within the large arable areas of this site, and I always hear both Teal and Wigeon calling from these ponds, but I rarely see them. I am loathe to walk up to them to have a look, because I don't really want to disturb them. However, a Buzzard did that for me on this morning, and 74 Wigeon and 21 Teal wheeled round before settling down again on the ponds. The fishing lake just held a pair of Mute Swans, 61 Mallards and 30 Coots. 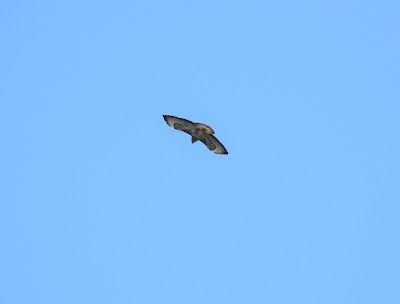 Buzzard
On the large arable field behind my second VP, there are usually a good number of mainly small Gulls, and I recorded 185 Black-headed Gulls, with three Common and fifteen Herring Gulls amongst them. Corvid numbers weren't as high as usual, with just 50 Jackdaws and 72 Rooks worth mentioning. Even the Skylarks feeding in the stubbles seemed to have reduced in numbers with just 22.
Wintering thrushes are still around in reasonable numbers, and I came across two Song Thrushes, 21 Redwings and 99 Fieldfares.
The following day, I was on a farm near Wrea Green, that I have talked about before carrying out my monthly survey for them. I had six oktas cloud cover, with a moderate westerly wind. I have never seen any Pink-footed Geese feeding on this farm, but as usual being relatively close to the Ribble I had a few Pinkies just after first light dispersing to various foraging areas, and I had 606 head north. 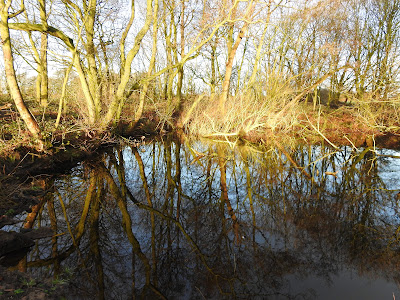 I enjoyed the reflections in one of the ponds on site
Just two species of raptor, two Buzzards and a female Kestrel, with a noisy Jay calling from the strip of woodland.
One of the reasons that I enjoy doing these surveys so much, is that you get a real feel for the number of birds present at a site, particularly when you look at the totals at the end of the survey. So, if I was just casually birding this site, a Blue Tit here or there wouldn't make it into my notebook, but the total of 13 that I recorded along the length of my transect did.
Wintering thrushes were still present in reasonable numbers here as well, but the totals for each species was very different to that of my survey site the day before. I had three Song Thrushes, a Mistle Thrush, 66 Redwings, 15 Blackbirds and only one Fieldfare. The Redwings are now fielding in the arable fields, looking for invertebrates, as they always do at this time of year.
Referring back to my comments on Blue Tits, there was a similar picture for Robins with 14 birds recorded, including nine singing birds. Eight Tree Sparrows, a Grey Wagtail and 28 Goldfinches are also worth mentioning. 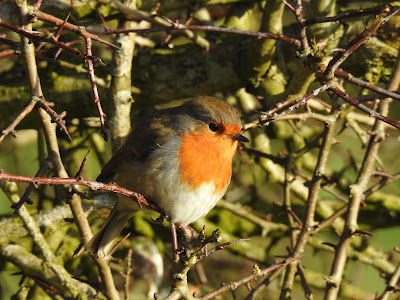 Robin
Two days later, I was at the third of my northwest Lancs wintering bird survey sites, and the one where I record a number of Brown Hares, and this morning was no exception, as I counted twelve of these cracking mammals from my two VP locations. 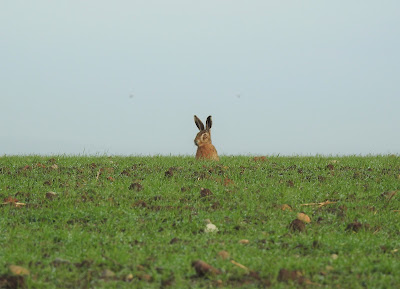 Brown Hare
Like my first site that I mentioned above, this site also has a number of ponds within the arable landscape, that I hear Teal calling from, but never see them, other than the handful that I usually put up from the pond that my first VP is located beside. I'm not sure what did me the honour of flushing the Teal this morning, but I had 73 of these beautiful small ducks flying around before settling again.
I was having a conversation with my mate Ian recently about Stock Doves, and how we both seem to be recording a lot more now, and how scarce they were when we first started birding 46 years ago. A quick look on the BTO website, under the section 'BirdTrends' reveals:
Following release from the lethal and sublethal effects of the organochlorine seed-dressings used in the 1950s and early 1960s, Stock Dove populations have increased very substantially. Numbers appeared to level off in the early 1980s, but the trend has been generally upward since the 1990s except for a sharp drop in numbers early in the current century. The BBS map of change in relative density between 1994-96 and 2007-09 indicates that increase has been strongest in western and eastern Britain, with decreases in midland regions. An apparent initial increase in nest failure rates at the egg stage, now reversed, was not detectable in farmland habitats alone. Overall, nest failure rates have fallen substantially since the 1980s and there has been a major increase in the number of fledglings raised per breeding attempt. There has been an increase across Europe since 1980. Woodward, I.D., Massimino, D., Hammond, M.J., Barber, L., Barimore, C., Harris, S.J., Leech, D.I., Noble, D.G., Walker, R.H., Baillie, S.R. & Robinson, R.A. (2020) BirdTrends 2020: trends in numbers, breeding success and survival for UK breeding birds. BTO Research Report 732. BTO, Thetford. www.bto.org/birdtrends.
Below is the Breeding Bird Survey (BBS) Stock Dove graph for the UK that illustrates this increase.

I recorded twelve Stock Doves along with 100 Woodpigeons, but you will see in later posts that at this site the number of Stock Doves increased. It's nice to have a good news story for a change!
Waders are scarce at this site, mainly because there isn't really any habitat for them, so 46 Lapwings and a Snipe over is pleasing to report. Just one raptor this morning, in the form of a male Kestrel, and it got me thinking, what is it about raptors and electricity pylons? 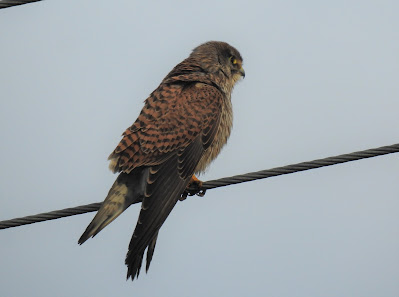 Kestrel
When doing bird surveys, more often than not, I will find a raptor perched either on top of the pylon, or further down, if there is a 'shoulder' as part of the construction of the pylon. I regularly record three raptor species on top of pylons; Buzzard, Kestrel and Peregrine. Other species use them as well, but Corvids, Woodpigeons, Stock Doves, finches and pipits etc. seem to prefer to perch on the cables, particularly if they are above good foraging habitat. In fact, there is some positive correlation between Corn Buntings, overhead cables, and nesting and foraging sites. Starlings are the most numerous passerine that have a penchant for perching on top of pylons. Perhaps I'll have to start a 'pylon' list!
There were few Corvids around this morning, but two 'croaking' Ravens heading northeast were as always, a pleasure to see. I don't see many Skylarks at this site, but I did have 15 heading northeast, and twelve Blackbirds were the only thrushes that I recorded. Bullfinches are far from common in this part of Lancashire, so it was good to encounter the regular wintering bird that I have been recording at this site.
Next, will be an update on our ringing activities at the feeding station during January.
Over on the right you will see that I have updated the ringing totals for Fylde Ringing Group for January. It was a slow start to the year, but more of that in my next post. The top two species ringed during January were Great Tit and Chaffinch, with totals of 14 and 10 respectively.
Posted by The Hairy Birder at 19:51