Meteorologically speaking, the first day of spring is 1st March, and astronomically speaking it is 20th March this year, and from a birding perspective, the first day of spring to me, is when the first migrants start going over on visible migration. This can be in late February, but it is usually in March, and funnily enough this year it was 1st March, corresponding with the meteorological first day of spring!
On 1st March, I started my survey under 2 oktas cloud cover, a light north-easterly breeze, and with a ground frost at first. The relatively clear conditions, and light north-easterly breeze will have encouraged some early visible migrants to move. Flying in to a light head-wind increases the airflow over the bird's wing, this creates more lift, and all with less effort. The ground speed can be compromised if the wind is too strong, but when it is light, it is perfect. Also, cooler air is denser, and this creates more lift.
So, what of the visible migrants on this morning? There weren't many of them, but what few there were, were very noticeable. First up, was a flock of 21 Woodpigeons heading northwest. These birds were high, and flying with a real sense of purpose. Hard to describe, but they just looked like, and were behaving like, birds on the move.
Two Carrion Crows were doing similar, and just by their flight action and 'feel', I knew they were migrants. A single Grey Wagtail and single Siskin heading north in the 'stratosphere', were also very obviously visible migrants. Like I said, not many, but visible migrants they certainly were.
Interestingly, all the Pink-footed Geese that I had, 219, were all birds heading south from roosting areas on the Wyre Estuary, to inland feeding areas. However, it won't be long before I see the first high flying, northward bound skeins of Pinkies.
Even though most of my wintering bird surveys are VP based, I do like to have a look at any interesting bits of habitat, and I noticed that there was a pond that I hadn't had a look at. So, I had a walk over, and the pond was actually larger than it looked on the map, and it held a pair of Tufted Ducks. Worth the look.
Continuing with the spring theme, the displaying Lapwings that I had in one of the large arable fields added to the spring-like feel, but then a flock of 198 in the distance that were obviously flushed by something, gave it a winter feel again! I suppose at this time of year, it is a tug of war between winter and spring. 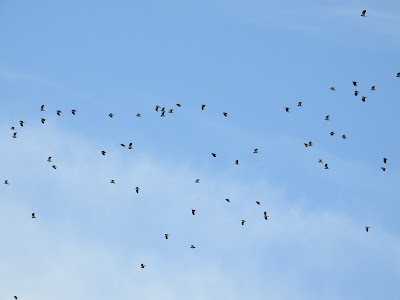 Lapwings
Only two species of raptor this morning. Possibly five Buzzards and three Kestrels. I say 'possibly', because you can't always be certain how many individuals are involved.
I've mentioned before that there is a Rookery forming part of the southern boundary of this site, and it was very active. I did a few counts through my scope, and the maximum number of Rooks that I recorded active within, over or around the colony, was 91.
Numbers of Skylarks have certainly dropped, as birds have dispersed to nesting areas, and I had five singing individuals this morning, plus a further 13 still feeding in the stubbles. Also feeding in the stubbles were 948 (very precise count) Starlings, three Redwings, 113 Fieldfares and 176 Linnets. 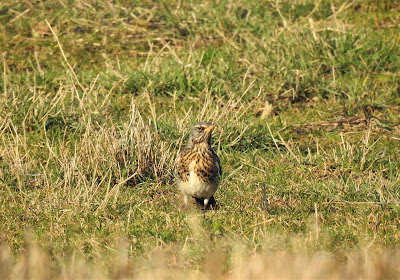 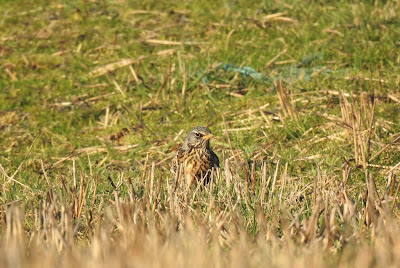 A few days later, Gail and I had a very quiet ringing session at our feeding station near Garstang. We had planned that this would be the last one of the winter. We had clear skies with a north-westerly wind that very quickly picked up, and within an hour it was really too breezy to continue.
We ringed 6 birds as follows (recaptures in brackets):
Great Tit - 2 (2)
Tree Sparrow - 2 (1)
Goldfinch - 1
Chaffinch - 1
Blue Tit - (1)
Robert and Diana, our friends that have the farm, also have some feeders outside their kitchen window, and during the morning Tree Sparrows were flying to and from our feeders to theirs, and it involved at least 15 - 20 birds.
We had a look on the wetland after we had packed up, and there were 20 Black-tailed Godwits, 150 Teal, 9 Coots, 8 Shovelers and 55 Wigeon. It was then time to retire to the farmhouse kitchen for a warming coffee.
I read an alarming snippet in a recent British Wildlife that stated that research had revealed that the carbon emissions released by bottom-trawling of the seabed amounts to one billion tonnes per year; 47.7 million tonnes of this comes from trawling in UK waters. To put that in perspective, this is more than double the emissions associated with UK livestock, and the UK ranks fifth among the world's worst offenders, with trawling accounting for an estimated 13% of terrestrial emissions. Quite shocking really!
Posted by The Hairy Birder at 13:15

I thought I had already cleaned my 10 Tree Sparrow boxes, but on checking one I hadnt, so all were done last week. A bit late, but there was no sign of new stuff yet so I hope they wont be put off...

I'm sure they will be fine Stewart. When I cleaned mine there was just one that had already started with some new stuff, but the rest contained old, flattened, post-fledging nests.