A Few Decent Birds At Last

As spring progresses, more and more migrants arrive, both in terms of the range of species and numbers of birds, so it was good to catch up with a few decent migrants over the past week.
I'm going to rewind to this time last week, when I visited my clients farm in Bowland, with some friends and colleagues from the RSPB, to have a look at the breeding wader habitat, and to assess how successful the winter grazing has been. That bit was easy, the fields all looked spot on in terms of sward height and wet features to support breeding Curlews, Lapwings and Redshanks. It just needs the birds now.
Driving along the track to my client's house, with thick hedgerows on each side of the track, and several feeding stations interspersed along the track, it was great to see numbers of finches flying from the feeders as I drove past. There were Lesser Redpolls, Goldfinches, Greenfinches, Chaffinches, Siskins and at least 20 Bramblings, maybe more. All good stuff. 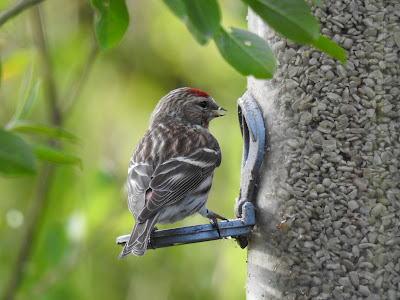 Lesser Redpoll
It felt as though spring hadn't quite made it up here yet, as it was still quite cold, and it was obvious that not all of the waders were in. There were several pairs of displaying Curlews and Lapwings, and two pairs of Redshanks was the really good news. We had one pair nest last year, so to get two pairs present this year is good news indeed, and it shows that the habitat management that we put in place last year and over winter is perhaps paying dividends.
Oystercatchers were still in winter mode, as 20 - 30 were flocking alongside one of the larger pools. A pair of Stonechats were in suitable breeding habitat, and two Ravens, a Buzzard and Kestrel are part of the regular avifauna. I'm looking forward to my next visit in late April when I will carry out a full breeding wader survey. 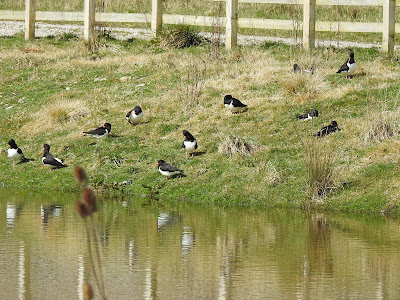 Oystercatchers
One of my wintering bird survey sites is going to be extended into mid-May to cover the migration period, and I will also be carrying out a breeding bird survey at the site following the new BBS guidelines of six survey visits. I was there last Saturday, and this was a combined BBS and migration survey.
I park my car in a layby and enter the arable farmland by way of a track. The land is very undulating, and from where I enter the farmland, I can see down on to a wet flood that escapes cultivation each year because of how wet is. As I crested the hill and headed down towards the wet flush, I heard a wildfowl call that I knew was different. Lifting my bins, I could see a pair of Garganey flying round. They had obviously been flushed by my outline against the sky. They flew round in a wide circle and dropped back onto the wet flush when I was out of the way. At last, a decent bird, or pair of birds, for the site.
Most of the stubbles have now been ploughed, and there were several Lapwings displaying with that fantastic tumbling display and crazy call. I even saw one Lapwing creating a nest scrape in one of the fields that had been tilled.
When I was at my second VP, I had my second decent bird of the morning, and it was whilst I was making a quick call to Gail to ask what was for lunch! Gail is used to some of our conversations on the phone stopping when I say "hang on a minute, what was that", or "hang on a minute, just let me count these Pinkies flying over"! This time it was "hang on a minute, that looks interesting", and it was, it was an Osprey heading north. Surprisingly, it was being escorted by a load of Gull wing-men, but it was high, and I suspect that it was managing to sneak through without being seen by any Gulls!
I've mentioned before that a Rookery lies along the southern boundary of my survey site, and it's a very busy place at the moment. I had a count, and there looks to be about 63 occupied nests. It's certainly noisy!
Even though I had a couple of half decent migrants, generally migrants were thin on the ground or in the air. I had singles of singing Blackcap and Chiffchaff, and the vis just consisted of (all between north and northeast) three Collared Doves, a Skylark, a Tree Sparrow, 31 Meadow Pipits, a Chaffinch, eleven Linnets, a Goldfinch and two Siskins.
On the Monday, I was at one of my other wintering bird survey sites close to the Ribble estuary that was receiving a survey in April at the request of Natural England. I had full cloud cover, with a light south-easterly wind, and I was hopeful for a migrant or two.
Amazingly, I had my first Sand Martins of the year when three headed northeast. I say amazingly, as it was 11th April and these were my first 'Smarties'! I have been so busy doing surveys, that I haven't had time to bird my local coastal sites, and hence the very late date for my first Sand Martins. In addition to the Smarties, I had four singing Chiffchaffs, and I thought that was going to be it migrant wise, until I had one of those telephone moments again.
Gail had phoned me to ask me what time I was likely to finish my survey, and I said to her "hang on a minute, there's a thrush sp. perched on top of an Alder". I lifted my bins, and there perched up was a cracking male Ring Ouzel. Superb! Whilst still on the phone to Gail, I ran round the other side of the pond where my VP is located to pick up my scope and tripod up, and ran back round. It was still there, and I had great views through my scope, but sadly it was a little too distant to photograph. 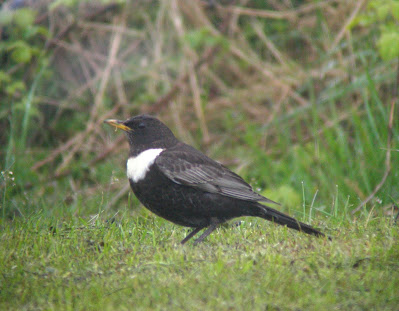 A heavily cropped, phone-scoped pic of a male Ring Ouzel, that I took in 2010
As I watched it through my scope, I could see it looking round. I love moments like this. It would tilt its head to one side and look skyward, presumably keeping an eye out for predators. After a couple of minutes, it flew over the field of winter wheat to another hedge, where it perched up, and displayed that migratory restlessness, giving that glorious 'chakk' call. The Collins Bird Guide describes the call as a stony clicking' tuck', but I think 'chakk' describes it better. It wasn't there for long, and that migratory restlessness took it into the air, and it was gone.
The rest of my survey was quiet, but it would be hard to beat a male Mountain Blackbird. There are about twenty local names for Ring Ouzel, and some of my favourites include Ring Blackbird, Heath Throstle, Hill Chack (I'm with that one. At least the good folks on Orkney think the call is a chack), Mountain Blackbird, Tor Ouzel, Ditch Blackie and again from Orkney, Flitterchack.
I was out surveying most days this week, but more of that in another post. The forecast is looking quite good over this holiday weekend, so hopefully I'll get some ringing and coastal birding in.
Posted by The Hairy Birder at 14:00