I've used the above Blog title before, and probably more than once, but it certainly sums up the Bank Holiday weekend for me. It wasn't just the birds and wildlife that was the quality, but the sites that I visited, and just as importantly, the company that I kept.
My weekend started on the Friday with a ringing session at the Nature Park. It was another cold spring morning, calm but cold, with a ground frost. In fact, putting the nets up I had to stop frequently and try and get some heat back into my fingers!
As I was putting the nets up a number of warblers were singing, and I had three Sedge Warblers, a Willow Warbler, three Cetti's Warblers, a Blackcap, two Whitethroats, a Lesser Whitethroat, a Reed Warbler and a Chiffchaff. A male Wheatear was probably the only grounded migrant that I had, and the vis was equally as quiet, with a single Lesser Redpoll and five Swallows heading north. 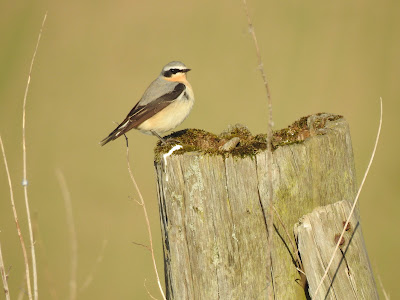 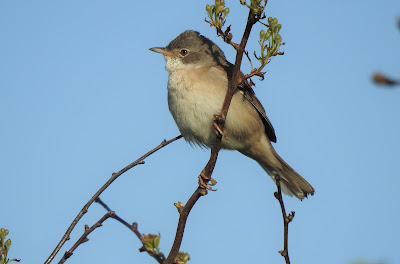 Out on the pools, the 21 Coots had seven young with them, and the best of the rest on the pools were eleven Canada Geese, five Great Black-backed Gulls, two Shelducks, 17 Lesser Black-backed Gulls, 106 Herring Gulls, two Mute Swans, a Great Crested Grebe, two Little Grebes (two that I could see!), a Grey Heron and a pair of Tufted Ducks. The only raptor I had was a female Sparrowhawk that drifted east. A migrant maybe? 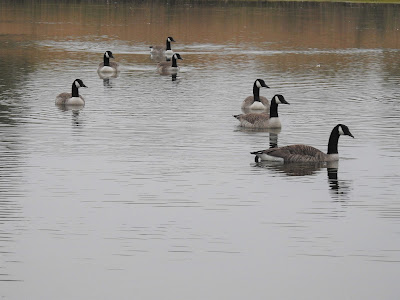 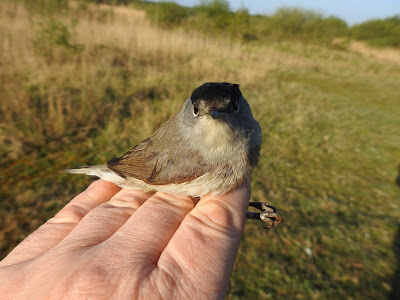 Male Blackcap
The Blackcap that I recaptured was ringed at the Nature Park on 14th July 2019, and we aged it as a '4' male, which means that it wasn't hatched in the calendar year of ringing, but could have been hatched in any year previously. This means that this bird hatched in 2018 at the latest, so he, as it's a male, is at least four years old!
We encountered him three times at the Nature Park in 2021, between 1st May and 11th July, but we never encountered him in 2020. It might well be that he was nesting in an area of the site away from our nets.
Saturday morning saw Gail and I checking boxes with Alice and John at the farm of our lovely friends, Robert and Diana, near Garstang. We had 38 boxes to check; 30 Tit/Tree Sparrow type boxes, two Swift boxes (occupied by Tree Sparrows), a Sparrow hotel, three Tawny Owl boxes, a Kestrel box and a Little Owl box. Of course, not all the boxes end up being occupied by the species that you are aiming at!
We found ten boxes occupied by Tree Sparrows, five by Blue Tits, four by Great Tits, five by Tit sp. (Blue or Great), one by a Kestrel, one by a Tawny Owl, one by a Jackdaw, one by a Grey Squirrel and ten empty. 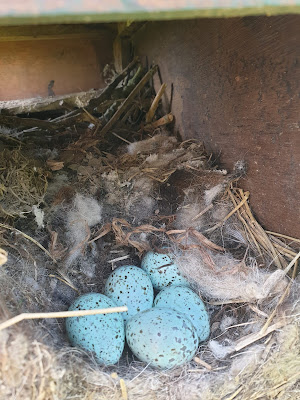 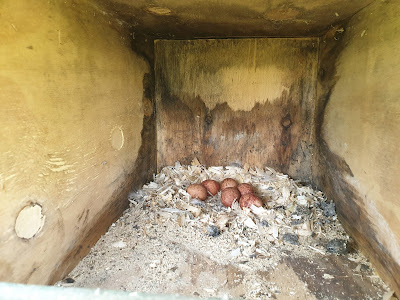 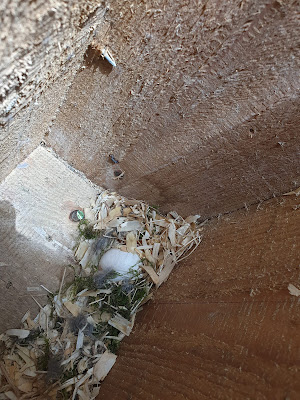 Tawny Owl nest
Eagle-eyed Alice then spotted a couple of nests in what I consider to be fairly unusual locations, although both were in natural sites. First up was a Great Tit nest in a tree cavity. Nothing unusual about that I hear you say, but the tree cavity was only about half a metre above the ground! Very susceptible to predation from mustelids in particular. See picture below. In fact all of the nest pictures included in this post are courtesy of Alice. Anyway, we'll keep an eye on it and I'll keep you posted as to whether it is successful or not. 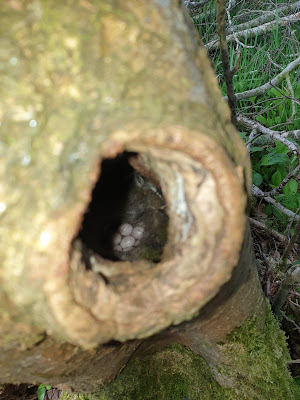 Great Tit nest in low tree cavity
The second unusual nest that Alice found was in the Bluebell wood. John had never been in the Bluebell wood before, so we decided to have a walk down and show him what a beautiful area of woodland it was. We'd just crossed the bridge, when Alice stopped, as she'd seen a bird fly from the ground. She didn't get enough on the bird to identify it, but she did find the nest on the ground amongst some Bluebells for concealment. The nest was full of very small chicks, still with their eyes open and whisps of fluffy down on their heads. We retreated and waited for the adults to return, and within a few minutes a Robin returned to the nest. Now, a Robin nesting on the ground was a first for me, but when I looked in the literature it is actually fairly common! 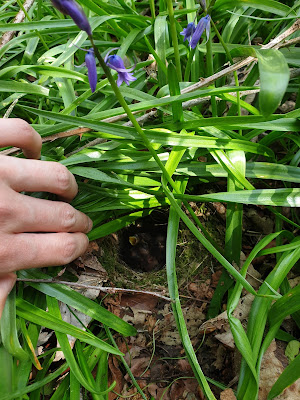 Robin nest
If Alice hadn't spotted the adult Robin flying from the ground just in front of her, it is possible that we might have stood on the nest! Again, we'll keep an eye on it and I'll let you know the outcome. You can see a picture of the nest below.
On Bank Holiday Monday I returned to the Nature Park for a second ringing session over the long weekend. It's been such a cold, trickly spring, that I was pretty certain that I wouldn't catch much. However, it was 2nd May, and you just never know!
As three days before, there were a few warblers singing as I put the nets up and they included five Sedge Warblers, six Cetti's warblers, three Whitethroats, a Blackcap, three Chiffchaffs, a Willow Warbler, a Grasshopper Warbler, a Lesser Whitethroat and three Reed Warblers. Certainly a few more than the Friday.
On the scrape, I noticed five Mute Swans, which I thought was unusual because there is a breeding pair on one of the other pools next to the scrape, and I wondered why a nesting pair were being so tolerant of five interloping Mute Swans. When I looked at them through my bins I got the answer, as they were all sub-adults with some brown colouration still in their plumage. Mute Swans take four years to reach maturity, so I guess these were probably third calendar year birds. They only stayed for about an hour before taking off and heading west.
Once again there was very little vis, in fact just nine Swallows and a single Sand Martin. The ringing wasn't much better, but I did catch a bird that made it worthwhile. Nothing mega, but a cracking adult Spotted Flycatcher! Our group has ringed 88 Spotted Flycatchers, and we ringed ten last year, but they were all pulli. This was only the eighth adult that we have ringed, and I think most of the others have been in late summer/early autumn. You can have a look at this beauty below. 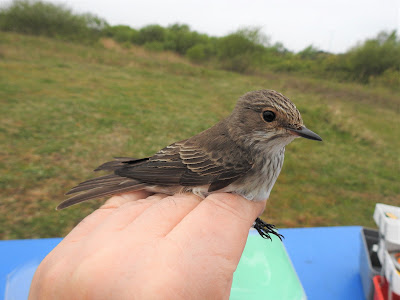 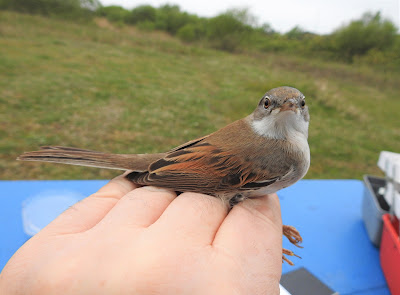 Whitethroat
I read with interest in a recent BirdGuides newsletter that a number of Swallows survived the winter in Britain, which meant that they skipped the usual 9,600 km autumn migration. A risky strategy, that paid off, as undoubtedly some of the over-winterers, if not all, would not have survived the return migration to and from south Africa.
Professor Juliet Vickery, Chief Executive of the BTO, said that the change in behaviour of these Swallows is one of the most remarkable signs yet of the warming world being caused by climate change.
The BTO's BirdTrack recording system received almost a hundred sightings of up to 12 individual Swallows by 1st February, with most being seen in the warmer south and south-west of Britain, and also in Ireland.
Swallows aren't the only species being affected by global warming. The BTO's recent report on British birds and climate change indicated that a quarter of British breeding species might be negatively affected, with the Puffin at severe risk. Worrying news indeed!
Over on the right you will see that I have updated the ringing totals for Fylde Ringing Group up until the end of April. Six new species for the year were ringed during April, and these were Wren, Willow Warbler, Blackcap, Sedge Warbler, Whitethroat and Song Thrush.
We didn't really ring any individual species in any numbers during the month, other than ten Willow Warblers perhaps. Below you will find the top seven 'movers and shakers' for the year'.
Top 7 Movers and Shakers for the Year
1. Great Tit - 35 (up from 2nd)
2. Blue Tit - 26 (straight in)
3. Chaffinch - 20 (down from 1st)
4. Goldfinch - 17 (straight in)
5. Reed Bunting - 15 (down from 3rd)
6. Blackbird - 10 (straight in)
Willow Warbler - 10 (straight in)
Posted by The Hairy Birder at 11:41