At last a southerly...

...but not before another 'watch' on a northerly. I headed to my coastal vantage point at the farm fields at weekend under 1 oktas cloud cover, with a bird clearing north-easterly wind. It was cold this morning, and I wished that I'd put another layer on.
Once again, the vis was poor with just two Grey Wags, 597 Pink-footed Geese, five Meadow Pipits, four Swallows, 5 Alba Wags and a Linnet. Meagre stuff indeed! The sea didn't fare any better, with 17 Cormorants, two Shelducks, three Sandwich Terns, four Eiders, eight Common Scoters, an Auk sp. and an Atlantic Grey Seal logged. There were no grounded migrants at all, so I didn't linger, nor did I check anywhere else. 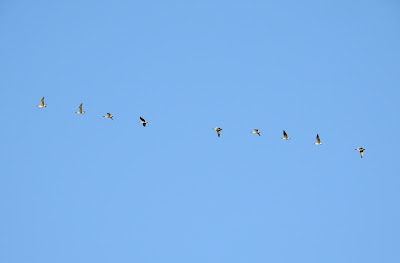 Pink-footed Geese
A couple of mornings ago Gail and I had a walk along the quay besides the estuary and we had cracking views of a Greenshank, one of my favourite birds, but could I get a picture of it? Not at all! In fact, the Redshanks are hard to photograph here as well, and I think it is because you are looking down on them, and consequently they are looking up at us, and I'm pretty sure that our outlines are breaking the sky-line, and hence their nervousness.
With the Greenshank were 38 Redshanks, six Oystercatchers, five Teal and two Curlews. We had a fly-over Rock Pipit and a fly-over Grey Wag, before another favourite bird of mine made an appearance, a Raven. They are regular here now, and it was flying backwards and forwards, giving that fantastic deep croak that seems to come from the back of their throat. Superb!
Yesterday, the wind finally turned southerly, but I don't know why I was getting excited, as it was a southerly off a northerly system. Anyway, it was calm enough to attempt a ringing session at the Nature Park, and so under 7 oktas cloud cover with a 5 - 10 mph southerly I put a couple of nets up in the reedbed and scrub.
At first light I could hear Pink-footed Geese leaving their roost on the estuary, but as I was in the reeds and scrub, I couldn't see them. Later in the morning there was some passage of Pinkies, 770, and all were birds heading either north or north-east, and I assume that these were birds that had roosted on the Ribble, that were heading to feeding areas further north into Lancashire and Cumbria.
I spoke to Ian during the morning, who I know would be birding at the Point, and he said that there was no vis, and this is what I was seeing, or not seeing as the case might be, at the Nature Park. However, when I started playing Meadow Pipit and Greenfinch song/calls on my MP3 players birds started dropping in, so there must have been some movement.
I ringed 29 birds as follows (recaptures in brackets):
Cetti's Warbler - 1
Meadow Pipit - 2
Great Tit - 1
Song Thrush - 1
Greenfinch - 21
Chiffchaff - 2
Long-tailed Tit - 1 (1) 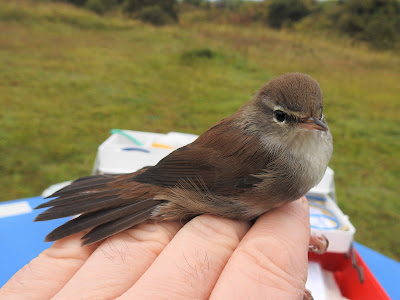 Cetti's Warbler
Two singing Cetti's Warblers and a Raven made it into my notebook, and that was it.
Some new research from the British Trust for Ornithology (BTO) implicates rising temperatures in the steep decline of the Willow Warbler in Britain.
Willow Warblers are doing better in Scotland, where temperatures are cooler, and evidence is building to suggest the population in southern Britain is a casualty of recent anthropogenic climate change.
The BTO used data from the BTO/JNCC/RSPB Breeding Bird Survey (BBS) to separate the impacts of climate change and habitat change on Willow Warbler and Chiffchaff populations. The analysis revealed that Willow Warbler numbers across the UK fell by 41% between 1994 and 2018, while those of the closely related Chiffchaff grew by 133%. In Scotland, where temperatures are cooler than the UK average, Willow Warblers increased by 77% and Chiffchaffs by 244%.
During the period studied, the mean breeding season temperature was 12.7 C in England and 10.2 C in Scotland, close to the optimum breeding temperatures for Chiffchaff (13.5 C) and Willow Warbler (11 C), respectively.
Met Office data show that UK temperatures in the last 30 years have been about 1 C warmer than those during the three preceding decades. Changes like these can have impacts including producing a mismatch between young birds' food requirements and insect abundance, an overall reduction in food abundance and shifts in habitat suitability. Anecdotally, I have noticed a decline in Willow Warblers in the 47 years that I have been birding. Worrying!
Posted by The Hairy Birder at 20:28