It was my first ringing session at the Obs this morning for the Spring after the lifting of the ringing suspension in the area due to the avian influenza outbreak at HyFly hatcheries near Pilling. At first light I was greeted with clear skies, a ground frost and it was calm. It felt quiet and I wondered whether it was too clear!

The first birds on the move were a hundred Pink-footed Geese that headed north and they were high, positively stratospheric! This would reflect the rest of the vis (all north) that I would record and all I had was two Carrion Crows, a Woodpigeon, two Linnets, 31 Meadow Pipits and three Siskins.

I didn't detect any grounded migrants other than the Chiffchaff that I ringed. Talking of ringing my totals were as follows: 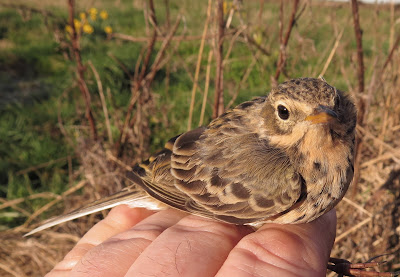 The Chiffchaff that I ringed had 'pollen horns' (see picture below) which are feathers that have become encrusted with pollen whilst the bird is foraging for insects or pollen on flowers. Research carried out at Portland Bird Observatory in Dorset showed that pollen from 19 plants was found on species like Chiffchaff and Willow Warbler, with the most pollen coming from Eucalyptus and citrus plants. Presumably the birds were picking this pollen up at plantations in North Africa, Spain or Portugal. Amazing stuff! 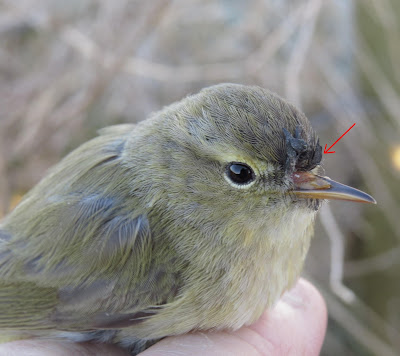 The forecast is looking okay again for tomorrow so I'll try some more ringing at the Obs!
Posted by The Hairy Birder at 21:13