Vis - the Variety of (Bird) Life

I headed to the Point this morning for a couple of hours birding, and based on the weather I predicted that there would be quite a lot of vis this morning and there was! The weather has been pretty awful these past few days with strong winds and rain, and this morning was the first decent morning for a while and the flood gates were certainly opened. I joined Ian before seven (Ian had been there since six), and spent a pleasurable couple of hours. We had 6 oktas cloud cover with a 10 - 15 mph east-northeasterly wind.

All of the birds moving on vis were heading between east and northeast and we had 502 Meadow Pipits, 51 Carrion Crows, six Linnets, 40 Whooper Swans, three Jackdaws, nine Alba Wags, eleven Goldfinches, a Rook, a female Sparrowhawk, 32 Woodpigeons, a Pied Wagtail, a male Kestrel (at sea), a female Merlin (at sea), three Magpies, a Siskin and a Stock Dove! As I said before Ian was there before me and I left him there, so I imagine the final Obs totals will be considerable and you will be able to find them HERE later. 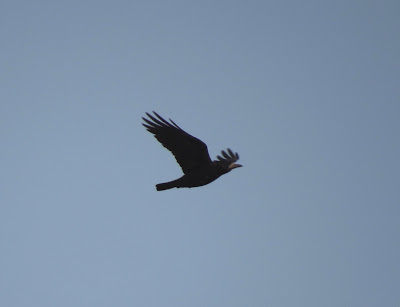 In comparison the sea was very quiet with just a Cormorant, two Red-throated Divers, four Eiders, two Red-breasted Mergansers and an Auk sp. There was a steady passage of Gulls heading in to the bay, but sadly I had my ears and eyes full counting everything else, so didn't count the Gulls.

I didn't have any grounded migrants until I got home where I had a cracking male Siskin in the garden and a Goldcrest. So it is likely that a few grounded migrants could have been found in a sheltered, sunny spot.

I had a walk at lunch time in the local woods and had a queen Bumblebee sp. on the wing as well as the Red Admiral below. 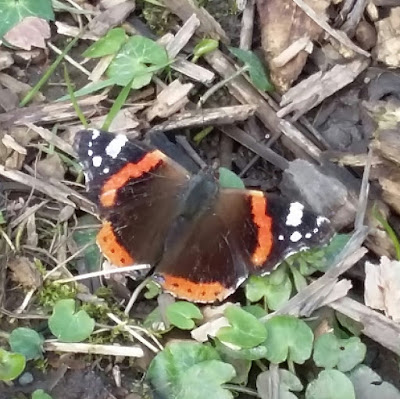 The forecast is looking reasonable over the next few days so I'll try and get out tomorrow morning again and fingers crossed Saturday morning I'll get some ringing done at the Obs! I'm at Hawkshead brewery beer festival tomorrow, but just in the afternoon so it should give me plenty of time to recover for a 5:00 o'clock alarm call Saturday morning!
Posted by The Hairy Birder at 15:41