I headed to the southern section of the Obs recording area and had a walk over the farm fields and a brief look on the sea. I had 6 oktas cloud cover with a 10 mph southeasterly wind..

There was quite a few Magpies around this morning and in total I had 15. If any of them had been flying a little higher I would have said that they were on vis. However, I did have the first trickle of vis this morning in the shape of 13 Woodpigeons, five Skylarks and two Siskins. All were high and heading S/SE into the wind. Ian had a similar mix of species at the Point with the addition of Grey Wagtail and Mistle Thrush.

Pink-footed Geese were dropping in to the farm fields across the road from first light. I could hear them, but not see them, other than a group of 97 and another skein of 50 heading north.

I just go to the sea wall as the tide was turning and as such the muscle beds on the rocks were exposed for a short while and I had an unusually high count of waders for here. I counted 134 Oystercatchers, five Redshanks, 15 Sanderlings (not feeding on the muscle beds of course!), 170 Turnstones and a single Curlew.

I didn't walk through the dunes, as just before I was due to enter the grounds of the public school at this juncture, an ignorant, trespassing dog walker with his rat on a stick (some kind of small terrier) headed that way. He would have flushed anything that was in there, so what would have been the point.

I have permission to go on the land owned by the school for the purposes of bird ringing and bird recording, but some of these dog walkers just think that having a dog entitles them to access all areas. We are talking about school grounds adjacent to a promenade and the beach here, so it's not as if there isn't anywhere to walk a dog! I hasten to add that I have friends who are dog owners and they are lovely law abiding people, as most dog walkers are, but sometimes you get a few that give the many a bad name!

Back to the birds. A quick look on the sea revealed very little, just six males and two female Eiders! On my way back to my car a Water Rail was calling from a ditch and it was close. As soon as I made a slight move to take a better look in to the ditch it stopped! It was a good record for the site though and could well be a bird on it's way back north as this site isn't typical Water Rail wintering habitat. 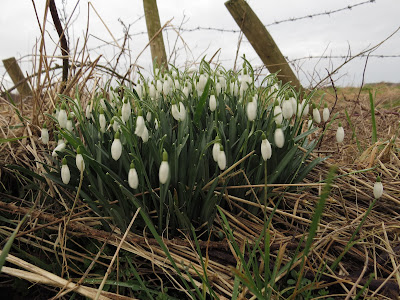 Snowdrops. The only thing I photographed this morning.

The weather isn't looking too bad this week, so I am hoping to get a few of my wintering bird surveys in. It won't be long until spring and then I can get back to the Obs properly and do some migration monitoring and ringing!
Posted by The Hairy Birder at 15:38