There's some snow threatened for tomorrow, but over recent days there's been some sounds of spring with an increase in bird song. Day's are lengthening, hormones are building and birds are singing!

This was very noticeable during a survey last week. Even though it was a cloudy and cold day a good few songsters could be heard. The avian orchestra consisted of a Goldfinch, a Great Tit, two Song Thrushes, two Dunnocks, five Robins, a Mistle Thrush and a Wren. Even one of the Redwings was doing a bit of sub-song! 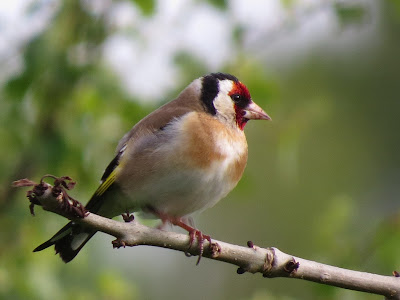 The morning started spectacularly when a female Sparrowhawk brought down a Feral Pigeon 30 metres in front of me! I saw the Feral Pigeon fly from left to right and then thwack, the Sparrowhawk hit! She had the Pigeon on the ground and was struggling to subdue it, so I moved away in case my presence was keeping her from her meal. After that,the female Kestrel and single Buzzard seemed tame in comparison!

There seemed to be a few more Reed Buntings around compared with previous surveys, and my count of 13 made me wonder whether it included a few returning birds. There also seemed to be an increase in Redwings with 48 counted, and it won't be long before they are returning to Scandinavia.

Ravens are always good value and I see more and more of them now. This morning a pair flew overhead calling and landed on top of an electricity pylon. I have known them to nest on electricity pylons, so you never know.

Down on the river the tide was in and I just caught the tail end of 45 Redshanks, a Golden Plover and 120 Black-tailed Godwits that the tide had pushed off. A calling Rock Pipit was also shoved off it's feeding area by the incoming tide.

The return leg across the fields produced just two Stock Doves, a Snipe and twelve Teal on a pond. So, some sounds of Spring and over the coming days and weeks that Spring bird song will only get better!
Posted by The Hairy Birder at 21:18