Migrants are still thin on the ground, and at the moment it feels like one of those 'blocking' Springs where migrants just trickle through straight on to the breeding grounds. Certainly at the moment there is some blocking weather across the Bay of Biscay where low pressure currently dominates. Looking at the weather charts some high pressure is due to build from Saturday into Sunday in this area, and fingers crossed this should allow some migrants through. However, on Sunday night into Monday this migrant highway will be shut down again by weather fronts here in the UK, so Sunday looks like the day for a small arrival. I'll keep my fingers crossed!

At first light I was at the Point at the Obs again monitoring any migration should it occur! I had full cloud cover with a 5 - 10 mph easterly wind and the visibility across the Bay varied throughout the morning, and this would have an effect on the direction of movement.

The Meadow Pipits this morning seemed to be waiting for improving weather before leaving the golf course and heading northeast across the Bay. When it was clear with views over to Cumbria birds would set off and head northeast. If the weather closed in a tad, they would either stop moving or move directly east, taking a longer circumnavigation around the bay. 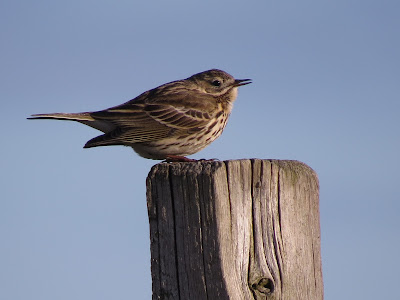 Numbers of vis this morning were similar to yesterday, but there was less species. My totals included (all east/northeast); 251 Meadow Pipits, six Alba Wags, five Linnets and nine Woodpigeons. The Woodpigeons were really unsure of the conditions this morning and would circle round a few times before committing themselves to a sea crossing!

The 'Red-throats' and Little Gulls were all heading east, and under normal clearer conditions would probably have 'over-landed' to the North Sea, but this morning none were climbing high as they headed east. I had cracking views of a Red-throated Diver in full summer plumage close in, and it was stonking. No photographs I'm afraid as they were cracking scope views and not camera views! Some of the Red-breasted Mergansers were entertaining as males displayed to the females with out-stretched bobbing heads!

The only waders I had this morning were 75 Turnstones (as usual being continually disturbed by dog walkers) and 48 pre-high tide Grey Plovers hunkered down behind ridges in the sand.

I'm not sure what I am going to do in the morning yet as it is forecast to remain cloudy overnight with rain coming in about 0700 with a fairly strong northeasterly wind (15 mph). I might just have an extra real ale or two and save it for an early start ringing Sunday morning.
Posted by The Hairy Birder at 16:55