It's the breeding season, allegedly, and for me that means the start of early, well early-ish, alarm calls and today was the first one. I wasn't going too far, just into north Lancs to continue with some on-going bird surveys and my alarm was set for 5:00 am. Tomorrow I'm in north Cumbria doing a breeding bird survey and my alarm will be set for a proper early time, 4:00 am! I'm not complaining because I actually enjoy getting up at that time; the roads are quiet and there's few people about!

Pre-dawn I had my first decent bird as I was driving to my survey site when a Barn Owl flew over the road. This particular stretch of road has fairly high hedges so this kept the Barn Owl high enough not to be hit. I had another driving bird sighting and this was a male Goosander that flew over the M6 somewhere near Lancaster. 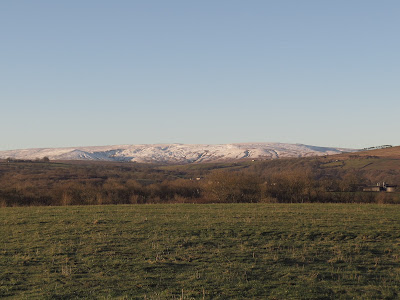 There was a dusting of snow on higher ground this morning. Above is
Bowland to the south of where I was and the Lakeland Fells below to the
north. 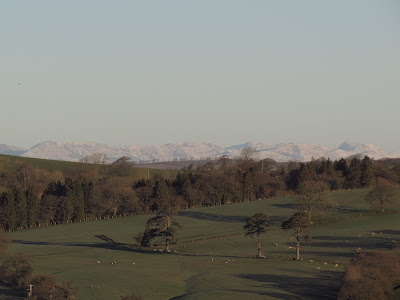 It was quite cold at my survey site and the temperature hovered just below or at zero and there was a frost. I set off to the glorious sound of a singing Song Thrush from one of the hedgerows that I was surveying. This hedgerow lead me to some of the 'top fields' and a number of Lapwings were displaying, in fact I had a total of 21 Lapwings during my wanderings and all were breeding birds.

Brown Hares seemed to be everywhere this morning and in total I counted twenty! I didn't witness any boxing, but I did see a nice group of five animals that would have been undoubtedly a female with four males in attendance. 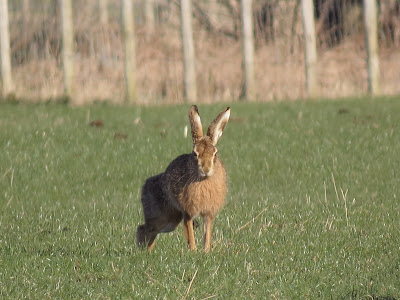 One of this morning's Brown Hares.

Down by some of the lower land towards the river the Gulls started to alarm call and I hoped for an Osprey, and realised it was too early in the morning for a migrating Osprey to be on the wing! I had to make do with a female Sparrowhawk, but she wasn't second best at all as I love Sparrowhawks!

I had two migrants during my survey. The first was a Chiffchaff making it's way along the sunny side of a hedge and frantically searching for food. The second was a long distant trans-Saharan migrant in the form of a male Swallow singing away from some telegraph wires. A Swallow singing away when the temperature was barely above freezing! Thankfully it warmed up later in the day and there was a number of insects on the wing, so the Swallow would have been able to feed okay.

Well I'd better sign off and go and set my alarm for tomorrow morning!
Posted by The Hairy Birder at 19:16