I had a busy morning yesterday ringing at the School with lots of buzzy Lesser Redpolls! I've said this numerous times before, probably every year at this time of year when Redpolls are on the move, but you can't beat clear skies in April with Redpolls flying overhead giving their buzzy call as they head to woodlands north and east! 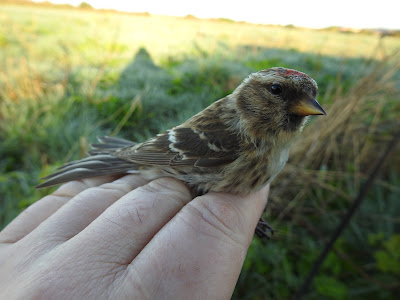 I got to the School about 5:00 a.m. and had my nets up by half past. I had clear skies with a light easterly wind. It didn't feel like a grounded morning, but there was obviously a few grounded migrants about as I had four Lesser Whitethroats (including 3 that I ringed), two Blackcaps (one ringed), a Chiffchaff and six Willow Warblers (all ringed). 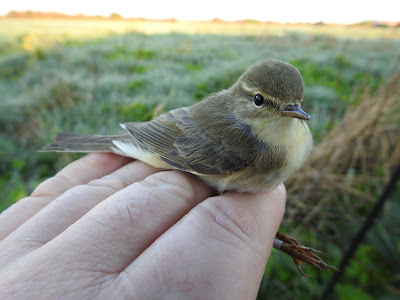 As I hinted at above I had a busy morning ringing and I ringed 49 birds as follows: 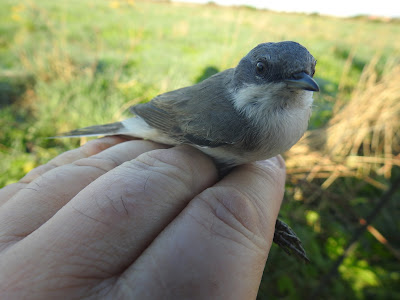 In addition to the above I controlled two Lesser Redpolls, so it will be interesting to see where they came from!

There was some vis this morning, and for me it was mainly Lesser Redpolls. There was probably actually a good mix of species, but as I was so busy ringing it was difficult for me to record the vis in any detail as well. My vis totals for what they are worth included 240 Lesser Redpolls, a Goldfinch, three Tree Pipits, a Carrion Crow, a Meadow Pipit, two Whimbrels and a female Sparrowhawk.

Today Gail and I headed to our Pied Flycatcher nest box site to put up six replacement boxes. We left it purposefully late, rather than putting them up over the winter, to perhaps provide some extra boxes for the Pied Flys in the hope that if they go up late they won't be used by Tits. 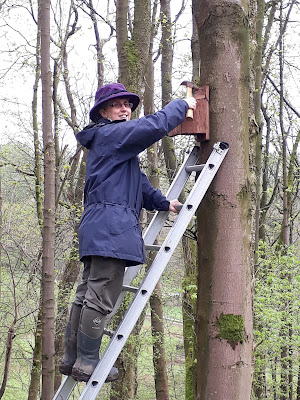 We had a couple of calling Pied Flycatchers in the wood, probably males at this stage. Other species we noted were Nuthatch, Siskins, Lesser Redpolls and a Redstart singing across the river. The Oystercatchers were on eggs on the tin roof of a pig shed! They nest here every year and are usually successful at getting a few chicks off!

I'm office bound for at least two days this week, but on the other days I've got bird surveys from Cheshire to Cumbria, so if I see anything good I'll let you know.
Posted by The Hairy Birder at 20:10