It was part two yesterday of the wader project I'm involved in and the morning was spent assessing some of the less suitable land to see if it could be brought into positive management for a suite of breeding waders, mainly Curlew, Lapwing and Redshank. We didn't see as much as before, but it was pleasant to be out amongst displaying Curlew and Lapwing. 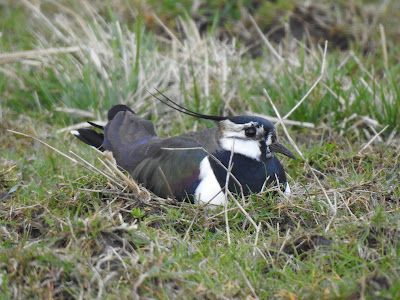 One thing that was very obvious was how far behind Spring is so far this year. It's still cold and we didn't come across any bids on eggs. There was a distinct feeling that there is more to come!

Talking about Spring being behind, I was in north Cumbria today and it is at least a week behind the balmy south of Lancashire. Close to home lots of trees are in buds, Blackthorn is flowering and Hawthorn is coming in to leaf, but there was none of that in the north of Cumbria today.

Once again I was surveying some plantation woodland and it was quiet; the weather didn't help with full cloud cover and a cold east-northeasterly wind. I won't 'beat about the bush' but just give you my limited highlights which was as follows; four House Sparrows, three Great Spotted Woodpeckers (two drumming), five Stock Doves, two Buzzards, four Tree Sparrows, a Mistle Thrush, two Chiffchaffs and a Goldcrest.

It's forecast to warm up from weekend onwards with a change in wind direction to southerly, so hopefully that will open the migrant floodgates!
Posted by The Hairy Birder at 20:47