For the past week I have been up everyday at 4:00 am, so this morning a 5:15 am alarm call almost seemed like a lie in, but not quite! I headed to the coastal farm fields bit of the Obs for a good old mooch round. I had 6 oktas cloud cover and a cold 10 mph northeasterly wind. It's been a cold Spring this year and I still haven't managed to get out of my Winter plumage!

As soon as I got out of my car I could hear a Lesser Whitethroat giving its rattling song, and I wasn't sure whether he was a freshly grounded migrant or setting up territory. As the morning went on the conditions cleared and within an hour I had clear skies. Although it wasn't particularly a grounded kind of morning, I did have a few grounded migrants in the form of two Lesser Whitethroats (including the aforementioned gentleman), five Willow Warblers, a Reed Warbler, ten Wheatears and five Sedge Warblers.

Where are all the Whitethroats? At this time of year in this part of the Obs recording area it should be hooching with Whitethroats, but they are conspicuous by their absence! Like the Swallows I hope they are just late and that nothing serious is afoot!

Considering the clear conditions the vis (all north or thereabouts) was limited this morning and all I had was seven Goldfinches, three Meadow Pipits, 55 Linnets, two Whimbrels, seven Lesser Redpolls, five Swallows (eek!), a Tree Pipit, a White Wagtail and three Alba Wagtails.

I sea watched for a while and at 0715 I had a Hooded Crow fly north along the beach, on the edge of the tide, gaining height all the time as it motored rapidly north. I gave Ian a ring to let him know it was coming his way and he picked it up heading northeast across the Bay towards Cumbria. 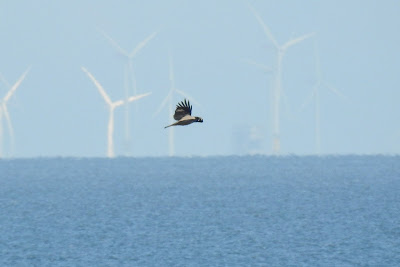 The supporting cast during the sea watch was 18 Sandwich Terns, 112 Common Scoters, 750 Knots, seven Arctic Terns, a male Eider, an Auk sp., a Manx Shearwater and an Atlantic Grey Seal.

I've got a few surveys coming up this week and if I have anything interesting I'll let you know!
Posted by The Hairy Birder at 19:16