I spent a pleasant day yesterday working with Gavin at a site looking to improve the habitat for breeding waders, although to be honest with you the site is already very good! I left my house in fog, then on my journey through Bowland it cleared, and when I got to the site it was foggy again! However, the sun soon burned the mist off and it became a glorious sunny day!

I do an annual breeding wader survey at this site and today I wasn't surveying the waders, but as a crude estimate I would say that we recorded one pair of Snipe, at least six pairs of Curlews (more to come) and eighteen pairs of Lapwings. Even though it was a relatively warm day, it felt like it was earlier in the year, and I don't doubt there will be more birds arriving over the coming weeks. 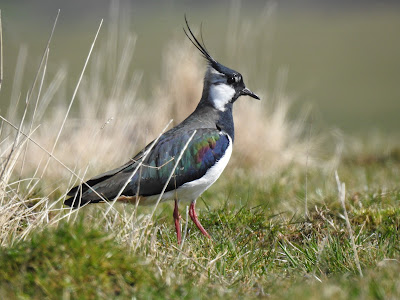 Lapwing. Look at the colours on this bird!

The highlight of the morning was when Gavin picked up an Osprey thermalling and drifting east, my first of the year. Other summer migrants were limited to a male Wheatear and a singing Willow Warbler.

There was lots of Brown Hares about too and we had somewhere in the region of 20 - 25, including some boxing. I never tire of watching these gorgeous creatures! 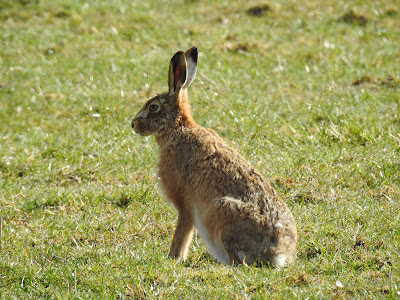 It's wet as I write, but the weather looks like it might improve later in the week so I should be out and about somewhere!
Posted by The Hairy Birder at 10:46