Towards the end of the week I was working at two very different sites, one brownfield and the other green, one in the south of the region and the other in the north (the National Park with the mountains in the middle of it)!

My southern site was a former industrial site, and perhaps a surprise to some readers, full of biodiversity. My job was to survey it for birds, but I don't doubt that it would be brilliant for invertebrates and have one or two unusual plants up its sleeve!

It was a cold grey morning when I was at my brownfield site, but this didn't dampen any of the birds. One of the first birds I had was a Raven flying across the site, and this was closely followed by a second bird being mobbed by what looked like three diminutive Carrion Crows; Ravens are big birds. A pair of Ravens, and I had hardly got out of my car!

Talking of Ravens please take a look at the Raptor Persecution UK blog here and read about Scottish (un) Natural Heritage's (SNH) shocking, misguided, un-scientific and just downright stupid licensing of a mass cull of Ravens in Perthshire just to see what happens! And if you feel so moved please email the Chair of SNH and sign the petition that you will find links to in the various blog postings.

A number of warblers were singing around the site including Whitethroat, Chiffchaff and Lesser Whitethroat. But it was the breeding waders that were most impressive; three pairs of Lapwings, two pairs of Oystercatchers and three pairs of Little Ringed Plovers. Yes, that's six LRPs and there could possibly have been eight! It will be interesting to see when I go back again in four weeks time whether all or some of the LRPs have settled down to breed, it might just be that some of them were just moving through. 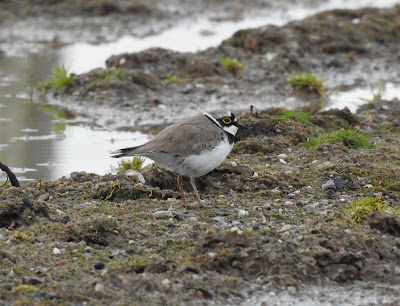 My second visit at the end of the week was to the north Lakes and one of my plantation woodland surveys. Driving north I had quite a bit of rain until I emerged from the Lune gorge to beautiful clear blue skies. At my survey site it was cold at first with a heavy dew and I had four oktas cloud cover. Oh, and it was calm!

The most abundant songster was the Willow Warbler and I had three in total. Other songsters included a Song Thrush, Robin and Blackcap. Somewhere in the stratosphere I could hear Lesser Redpolls and Siskins flying over, but I have no idea how many.

An addition to the site list was a Jay that flew in to the relatively young woodland, before heading off to some mature trees on the steading. Swallows are still thin on the ground and I only had 2 or 3 birds during the morning. My survey was finished off with a Red Squirrel crossing the lane and over a wall! 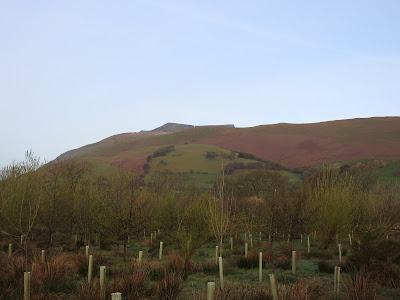 Blencathra through the trees
Posted by The Hairy Birder at 20:04