Sadly I haven't been birding this week, but fingers crossed that will be remedied tomorrow. During the week on various excursions into the garden to look for invertebrates I spotted a humble Greenbottle Fly that looked reasonably photogenic i.e. it would remain still long enough for me to snap it! I grabbed my camera and took a few shots and below is the result of one of the better cropped pics! 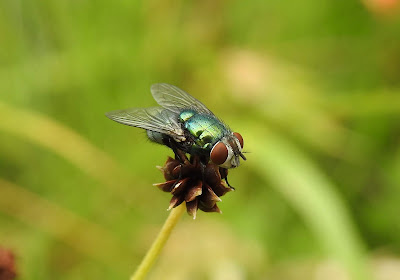 
I ran my moth for the first time in a while last night and out of the catch managed to identify fourteen moths of nine species as follows: 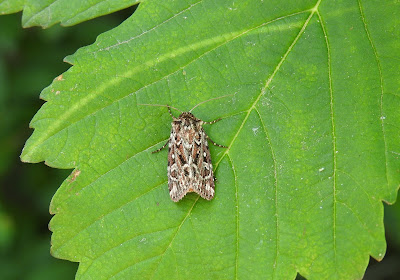 The True Lover's Knot was a first for my garden and totally unexpected. They are usually found on lowland heathland and upland moorland, so basically acid habitat with heather sp. A quick conversation with Pete informed me that there had been a few records recently in lowland Lancs probably caused by easterly/katabatic winds. These are winds that blow down from higher ground out on to plains or valleys. I did wonder that whether some of these fires on moorland areas of Greater Manchester and Lancashire, combined with easterly winds, had displaced them from their upland habitat. Whatever the reason for its occurrence it was a nice addition to my garden fauna!
Posted by The Hairy Birder at 18:24