I headed to the Point this morning for first light and was joined by Ian. We had three oktas cloud cover and a 25 mph west-northwesterly wind. Unlike the other day when there was too much southerly, today there was too much northerly!

We didn't expect much because of the wind direction, and as such we weren't disappointed, but the morning did have some interest. One of the most interesting/unusual sightings was that of five Little Egrets heading west out to sea and flying between the wave troughs. I have said it several times on here before that being a birder of a certain generation I always delight in seeing Little Egrets, but when they are heading west out to see it is quite spectacular. Where were they going? That is a good question, but as there are so many breeding in the UK now they are probably establishing migratory patterns from breeding to wintering grounds, and I guess that these were some local/northerly breeding birds heading to their wintering area. We later had another individual drop in and feed in a tidal pool on the shore. 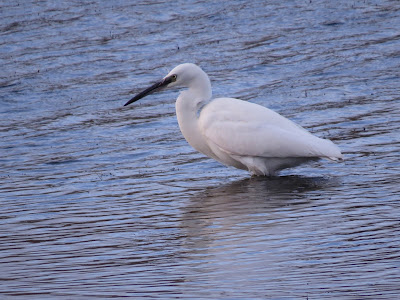 Waders as the tide ran were restricted to 223 Oystercatchers, 121 Sanderlings and two Curlews. There was even a bit of vis this morning and Meadow Pipits were heading southwest out to sea and we had about fifty. A few Pink-footed Geese came in from the north and they too headed southwest, all 85 of them.

Towards the end of our watch a female Merlin headed west at sea and a short while later she was low over the beach in front of us with a prey item, probably a Meadow Pipit, and I guess she was probably a migrant as well following the Meadow Pipits.

It was forecast to be wet tomorrow, but now that's changed and it's looking like a reasonable morning with the possibility of some decent vis. Even though I will be up very early on Monday to start a series of wintering bird surveys in Cheshire I'll be up and out in the morning. It's September and as a birder you're duty bound to be out this month!
Posted by The Hairy Birder at 19:51