Hoglet number 4 scuppered my birding plans for this morning, but it was worth it to rescue another wee fella, or wee girl should I say as she is a female! Somewhere between midnight and one o'clock this morning our security light went on and off a couple of times and I guessed it was just the wind, but due to the fact that we had rescued three small Hedgehogs in recent days I thought I would get up and have a look.

I shone my head torch on to our mini meadow through the back door and there on the edge of the grass was another Hoglet! I went out and collected the wee girl, weighed her (240g) and placed her in the cat carrier with bedding, food and water. This is becoming a habit! A quick text to my good friend Terry and he arranged for me to take it in the morning to a lovely lady called Jean who cares for Hedgehogs.

Jean's set up was impressive, and she has basically converted her conservatory in to a Hedgehog hospital. She has banks of keeping boxes full of Hogs and there must have been 20-30 Hedgehogs in her remarkable care. Jean weighed her and she was 300g, more than I thought, but again far too light to hibernate for the winter. Jean asked us for a name for the Hoglet, just to make it easier for her records rather than recording Hedgehog 32YRT50, or something similar, so I named her Gail after my Gail! 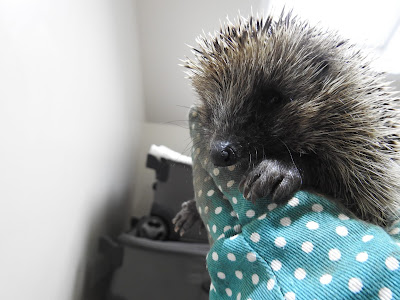 I was surprised at the number of ticks on her and Jean expertly removed at least five and placed her in a keeping box with one of her brothers/sisters, the Hoglet from our garden that Terry took to Jean yesterday. Jean said that she would keep us informed of her progress, so we just need to hope that she responds well and puts on weight. She certainly was a feisty little lady, so I remain hopeful.

I've rescheduled my birding for tomorrow, but it won't be an early start as I have four days of wintering bird surveys next week the length of breadth of the northwest with some very early starts!
Posted by The Hairy Birder at 15:44