Over the past six days it has been quite a saga with young Hedgehogs in our garden. I've rescued three Hoglets in six days! Last Saturday (20th) evening I went out to the beer fridge in the garage to procure another bottle of real ale, and just next to the back door step was a Hoglet feeding on some food I had spilled when putting some hedgehog food out earlier.

I feed the Hedgehogs in my garden every night, and at the moment I am getting at least one large individual every night just after it has gone dark. I am also getting the same or another just before it becomes light. This Hoglet looked small, too small in fact to survive hibernation, so I made a quick call to my good friend Terry who is involved in caring for Hedgehogs. Terry acts as coordinator locally for hedgehog rescue and he has a number of people that he homes hedgehogs with who look after them over the winter.

They are kept awake, by keeping them warm, over winter and fed to reach a weight where it is safe to release them in the Spring. To survive hibernation Hedgehogs as a general rule need to weigh 600g, if they try and hibernate weighing less than this then it is unlikely that they will wake up, passing away in their sleep because they don't have enough reserves.

At the end of the winter the rescued Hedgehogs are released in enclosures where they are re-nocturnalised (if there is such a word), before being released at a safe release site. 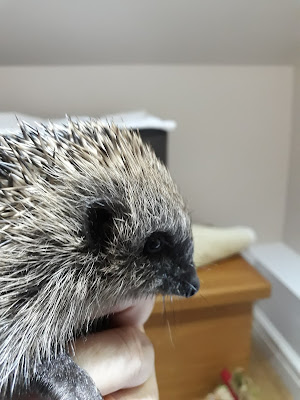 This is Hoglet number one before it was settled in for
the night. 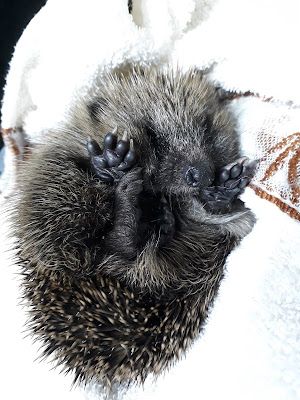 This is the wee fella in the morning prior to us
changing its bedding.

On Tuesday (23rd), I was err, going out to the beer fridge and noticed a Hoglet feeding on the food that I had put out. So once again, I picked it up and took it indoors. Another text to Terry and the following day he called and collected it.

After the second Hoglet we realised that it was highly likely that they were both from the same late litter, and in fact Terry later found out from the carer that they were brother and sister and this latest Hoglet weighed 240g. Hoglet number two!

It was raining last night so I had put the hedgehog food and water under cover in the feeding station I have made, and once again I was going out for a fine bottle of real ale, when I noticed yet another Hoglet in the feeding station. I brought the little chap indoors, weighed it, and at 250g it was again too small to survive hibernation. I made it comfortable in our cat basket with a bed, food and water and once again sent a text to Terry. Hoglet number three!

Terry called to collect the wee fella this morning and gave us an update on the first two, who are doing really well and have already put on 30g.

Hedgehogs normally have 4-5 Hoglets, so there is a chance that this saga hasn't ended yet. If there are another 1-2 Hoglets out there I hope they come into our garden to feed so we can save them too! I'll keep you posted.
Posted by The Hairy Birder at 14:48