Yesterday, Alice and I made our first visit to check our Pied Flycatcher boxes in Bowland. The weather was perfect for checking boxes in as much as it wasn't raining, always a bonus, and it was neither too warm or too cool.
The second box that we checked had smashed Tit sp. (probably Great Tit) eggs in it, and I was a little puzzled as to what had gone on. Surely if it had been predated, the predator would have taken the eggs. Then I got to thinking, not if the sitting female was the target of the nest raid! If you look closely at the picture of the carnage I found in this particular box, you can see some feathers of the adult bird. 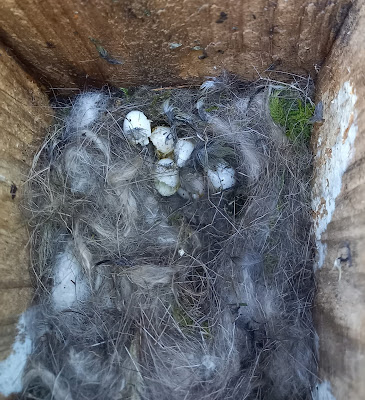 We had another two boxes like this, and on these two boxes there were feathers smeared around the inside of the hole entrance into the box. As Alice pointed out, all three boxes that were predated were fairly close to the river, or certainly at a lower altitude in the valley. This is the first time that I have had this happen in 20 years of monitoring at this site. I have seen it another site that we used to monitor in the Lune valley, and the suspect there was a Weasel or Weasels! It only happened over the course of one breeding season, and was never repeated, and we surmised that it was something that an individual Weasel had learned to do, but once it had presumably died, the predation stopped. And I think it is the case at our site in Bowland. Fingers crossed we won't lose anymore.
That was the first bit of bad news for the site, as by the end of our check we noted that the occupancy rate of the boxes was very low, and I was prepared to stick my neck out and say perhaps the lowest ever, or certainly in recent years!
I decided to have a look at the percentage occupancy of our boxes over the last five years. I applied the same methodology to define occupancy for each of the species that nest in our boxes. For Pied Flycatcher I classed a box as being occupied if there was a complete nest as a minimum, and for the Tit species and Nuthatch, I classed a box as being occupied if there were warm eggs as a minimum. I had to apply a different methodology/classification for the Pied Flycatchers v. resident species, because of the difference in timing of breeding. You can see the results below.
From the above, you can see that the perecentage occupancy of the first visit for this year is substantially lower than any of the previous four years. Of course, this isn't robust statistically, but it does back up my 'gut feeling'. It will be interesting to see how things develop over subsequent visits.
We had seven pairs of Pied Flycatchers occupying boxes, which is probably just about average, or maybe even on the low side, so it will be interesting to see if any more birds arrive, as they can arrive late if it is a cold/late spring. 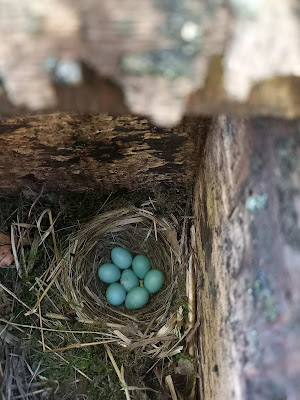 Pied Flycatcher nest
It is within the Tit species that the occupancy rate was particularly poor, and we only had four boxes occupied with Great Tits, and this figure includes the three predated boxes as I suspect they were Great Tits, and four boxes with Blue Tits. We had a pair of Nuthatches on eggs, in the box that they have used over the last few years, which is made from recycled plastic silage wrap! 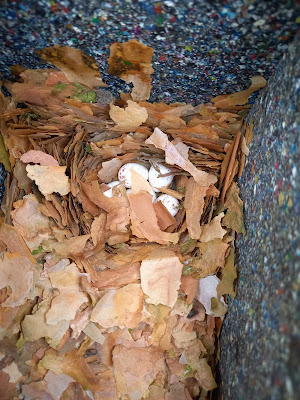 Nuthatch nest
Singing in the woodland, or on the woodland edge, as we checked our boxes were Willow Warbler, several Blackcaps, Whitethroat, Chiffchaff, Goldcrest, and Pied Flycatcher of course. On the river were a pair of Common Sandpipers, and a female Mallard trying to keep her brood together, in the fast-flowing water that had been swelled by recent rain.
More boxes later in the week, and I'll let you know how we get on with our Pied Flycatcher boxes next weekend.
Posted by The Hairy Birder at 15:41