On Saturday, Alice and I started out at our Pied Flycatcher nest box scheme in Bowland, and it was a relatively quick visit with only ten boxes to check now. We had a bit of more bad news, with another female Pied Flycatcher predated from a box by either a Weasel or a Stoat.
Interestingly, other ringers around the country, but particularly in the north, are reporting predation incidents of sitting females from boxes. One theory put forward, is that there are fewer small mammals around this year because of the cold winter and spring impacting on their survival, but also a lack of grass growth because of the cold spring particularly, resulting in poor habitat quality for them. This could mean that Weasels and Stoats are having to turn to other sources of food, as they are struggling to find their favoured prey of small mammals. I wonder what the situation is with the Rabbit population this year?
In connection with this, a lot of Barn Owls haven't laid eggs as yet, because they aren't in the right condition to lay eggs, as they have to attain a certain weight to produce and lay eggs. This again, is probably connected with low numbers of small mammals, and hence why they are struggling to get into condition.
We still have four boxes of Pied Flycatchers with females incubating eggs, four broods of very small Blue Tits (too small to ring) and a brood of small Great Tits, again too small to ring. 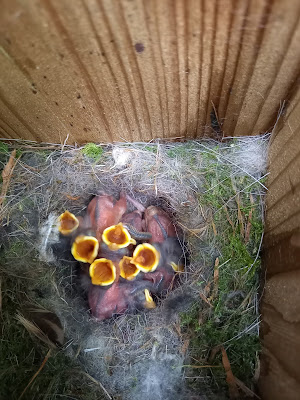 Blue Tits
We then headed to our friend's farm near Nateby, to check the outstanding boxes there. A new experience for Alice, and one that I have only experienced twice before, was checking some high boxes from the 'man basket' of a telehandler! On the end of Robert's barn are a few Swift boxes that have never been used by Swifts sadly, but they are used by Tree Sparrows. In fact, this whole building is like one large nest box as there are Tree Sparrows in lots of nooks and crannies all over the building. 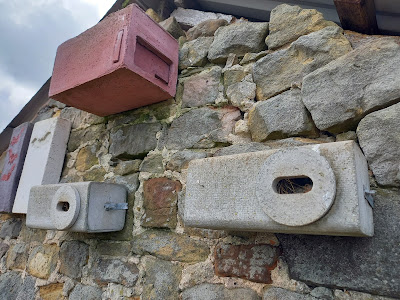 Swift boxes occupied by Tree Sparrows
One Swift box had six eggs in that were being incubated, and the other box had a Tree Sparrow nest with one cold egg. So, it could well be a start of a second clutch, and the female hasn't finished laying yet. Time will tell. Another nest box on the side of another building in had Tree Sparrows in that were too large to ring.
We did manage to ring a brood of Blue Tits and a brood of Great Tits, and we've got some Tree Sparrows to look forward to in a few weeks.
Back in 2005, Gail and I with my dear late Mum, visited our relatives in southern Ontario, Canada, and on this particular day we were walking a section of the Canada Greenway Trail in Essex County. We had accessed the trail from an area called Vereker, and spent a couple of hours walking it. For some reason, and a reason that I can't remember, I only recorded the numbers of certain species that we observed, and for others, they were just listed without a count in my notebook.
So, in no particular order along the trail we encountered Common Grackle, Barn Swallow, three Baltimore Orioles, Red-winged Blackbird, Gray Catbird, Blue Jay, Winter Wren, American Robin, Brown-headed Cowbird, Mourning Dove, Bank Swallow, two Alder Flycatchers, Willow Flycatcher, a calling Common Nighthawk, Kildeer, Song Sparrow, Yellow Warbler, Red-tailed Hawk, Great Blue Heron, Downy Woodpecker, a male & two female Northern Cardinals, Tree Swallow, Brown Thrasher, European Starling, Ring-billed Gull, two American Goldfinches, four Indigo Buntings and two Eastern Towhees.
Sadly, all I had was a little point and shoot digital camera at the time, so I don't have any photographs of the above species, but below is a photograph of an Indigo Bunting in the hand, courtesy of my good friends at Long Point Bird Observatory. 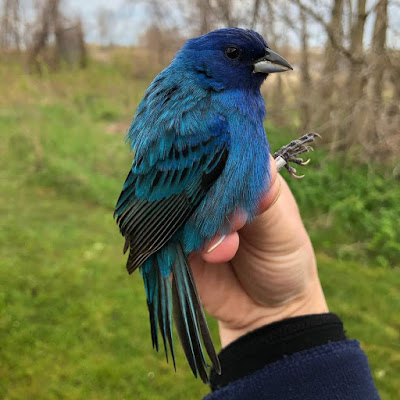 Indigo Bunting
Posted by The Hairy Birder at 19:36