More Geese and Some Autumnal Nostalgia

This is a post of two halves; the first half is a brief summary of yesterday's sightings during one of my surveys, and the second half is an autumnal walk down memory lane for me.
I was at my wintering bird survey site number two yesterday, again in west Lancs, under 6 oktas of cloud cover, with a light south-easterly wind. No dramas this morning, just five hours of uninterrupted bird surveying. Marvellous!
Geese were certainly the order of the day, and of the Pink-footed variety, and for the first hour or so, 'Pinkies' were arriving from the south, and heading predominantly northeast. They will have been coming from their southwest Lancs roost sites, probably around the Ribble marshes, and heading towards foraging areas in the Over Wyre district towards Lancaster. It is possible that some birds might also have been motoring on towards the Solway, and even to one of my favourite places, Mersehead. In total I had 4,447 of these cracking little geese go over! 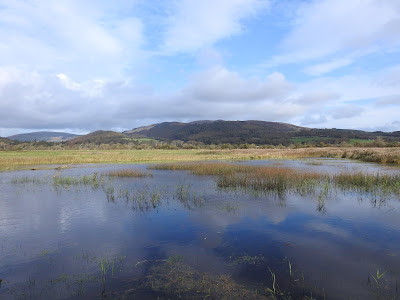 The view from one of the hides at one of my favourite nature reserves;
Mersehead RSPB
There is lots of stubble within the area that I am surveying, although some of it was being ploughed and tilled yesterday, and the stubbles held somewhere in the region of 271 Woodpigeons, 45 Skylarks, 15 Goldfinches and 44 Linnets. Hunting over the stubbles were a couple of male Sparrowhawks and two Kestrels. The only other raptor species that I had, was a Buzzard that stood sentinel on top of a pylon.
One particular field that was being ploughed, had at least 213 Black-headed Gulls and 62 Herring Gulls, that either followed the tractor, or loafed in another part of the field. It was interesting to note, that once the farmer started to till the ploughed land, they lost interest and slowly drifted away. Presumably, it was the cutting and turning of the soil by the plough that provided the greatest feeding opportunities.
It was another day, with another Jay, but only one this time, flying along the edge of a field of maize. However, the best corvids were three high, flying, croaking Ravens, that headed south under the late morning sun. Rooks and Jackdaws numbered 111 and 73 respectively, and were continually flying from an area of woodland to feed on the adjacent farmland. 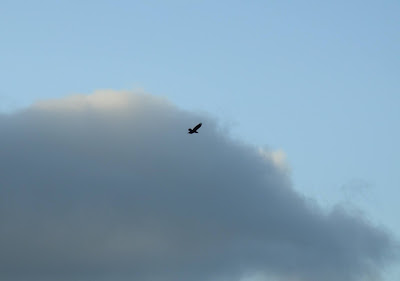 High flying Raven
Other than the Pinkies, which I suppose weren't technically vis, there was a small amount of passerine vis, and again not as much as I would have expected, but I did have my first Brambling and Redwing for the autumn over, as well as 24 Skylarks, two Swallows, three Tree Sparrows, ten Meadow Pipits, six Chaffinches, two Linnets and a Reed Bunting.
Of course, during the five hours I was there I recorded a number of other species, but these were the highlights.
As a keen teenage birder and naturalist, before I was old enough to learn to drive, I used to walk to my local nature reserve, Marton Mere. I also joined a local naturalists group called the Fylde Naturalists' Society, and on alternate Saturdays they ran coach trips to various locations throughout Cumbria and Lancashire. This gave me the opportunity to get out to other sites, and immerse myself in habitats that I couldn't find closer to home, and more importantly, learn under the tutelage of some very fine local naturalists. As an adult, it was a privilege to return to the Fylde Naturalists' Society and talk to them about my work at the time as a Farm Conservation Adviser, and also on another occasion I talked to them about the BTO Ringing Scheme.
Anyway, I digress, because what I wanted to say, is that on this date in 1978 I was on a walk with them around the Silverdale area, and to be more precise, between the villages of Yealand Conyers and Yealand Redmayne. In the programme, the walk was detailed as Yealand and Berry Walk, and that is how I entered it in my notebook.
As you can imagine, as a 14-year-old I had a lot to learn, but I always kept a notebook, and I still do. And looking at my old notebooks from this time they make me smile, mainly because of my rather naive use of language, and how I wrote as a young boy.
I can tell you that during this walk 43 years ago, it was "dull and fairly warm, and it spotted slightly". Spotted slightly? I assume that this is a reference to light rain/drizzle, weather that I would call dreich today. My description of the habitat that we walked through wasn't even as detailed as a Phase 1, and I said that the habitat was "open and dense woodland, and open fields". I tried my best!
We were out from 8:31 a.m. until 5:50 p.m. Very precise! Whenever I entered field outings in my notebook at this time, I had various standard headings that I used from site to site, that I would record various details under. For example, it could be 'weather ', 'habitat' etc, but after the list of birds that I recorded, I always had a section called 'Interesting Points', and it is from the interesting points of that trip in October 1978, that I have detailed below. Please forgive my 14-year-old self, but sometimes I am reminded of some nugget of interesting information, particularly changes in the range and population of certain species, and the sighting of a Red Squirrel is a classic example. At that time, they still hung on in this part of Lancashire, which to me is of great interest. So, on with 'Interesting Points'.
"As we were walking at the beginning of the walk, my friend Andrew noticed a moth on a leaf. We showed it to Mr. Watson (President of the Fylde Naturalists Society) and he identified it as a Brick Moth".
I like how respectful I was to Arthur, calling him Mr Watson. Arthur Watson was one of the greatest entomologists in Lancashire, and he was a lovely, lovely man, and I learned a great deal from him. My first conservation hero perhaps? Arthur became chairman in 1963, and remained chairman until his untimely death in 1980. Back to those interesting points.
"Then in the trees there was a movement. Everyone looked up, and there was a Red Squirrel scrambling through the branches of the trees.
Deeper in the woods we came across some Badger setts. These might have been disused, but we couldn't tell. On a young tree there were some deer rubbings, probably from Red Deer because of their height. Amongst the trees November Moths were around.
After dinner we went through some more open woodland. Amongst the Birch trees along the ground was a lot of fungi called Tricholoma album".
And that was it. My interesting sightings came to abrupt halt. I can tell you that the species of fungi was identified by another of my conservation heroes, and another lovely man, called Norman Woods. Norman was a brilliant naturalist, and one of those amazing people who are knowledgeable on all taxa. Norman became Chairman after Arthur passed away in 1980, and he remained chairman until 1991.
For a few years, during my teenage birder/naturalist period, I used to illustrate my notebook with coloured pencil drawings, and the drawing that accompanied the above 'Yealand and Berry Walk' was that of a male Pheasant, and I have posted it below. 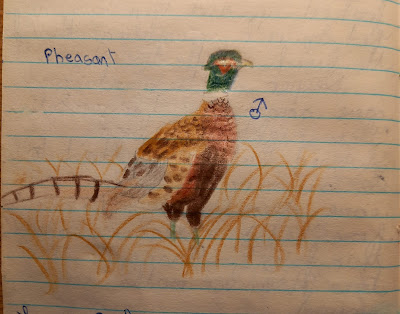 Not quite Ian Lewington or Killian Mullarney standard, but I think you can tell
what it is!
I really enjoyed that trip down memory lane, and I am thankful that my enthusiasm for the natural world remains undimmed after all these years, and I retain that boyish enthusiasm!
Posted by The Hairy Birder at 20:17