I had a walk round the farm fields at the Obs this morning and I wasn't too hopeful of much due to the clear skies and the 10 - 15 mph northeasterly wind. I had my first Pinkies of the autumn when I had a close encounter of the wasp kind and I had to do a runner to escape some angry wasps! All I could put in my notebook was c.30 Pinkies because it was just as I was going to count the individuals in the small skein that the wasps showed some interest in me! My interaction with the winged tigers with a sting in their tail was close to one of my mist net rides, so I won't be putting that net up in the morning!

I had a further five Pink-footed Geese during the morning, and there was a bit of vis albeit it very high due to the clear skies. My vis totals included 128 Meadow Pipits, seven Alba Wags, four Grey Wagtails, a Reed Bunting, a Siskin, two Skylarks and three Swallows. 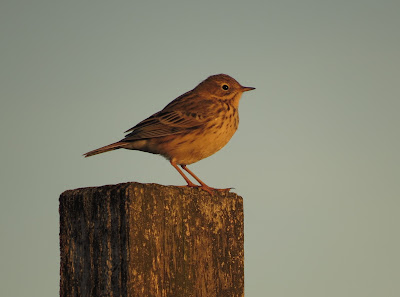 Due to the clear overnight conditions I didn't expect any grounded migrants but I did record single Chiffchaff and Goldcrest, and three Wheatears. The sea was fairly quiet with ten Cormorants, a Great Crested Grebe, four Auk sp., a Guillemot, fifty Common Scoters and four Sandwich Terns.

About 20-30 House Martins were feeding on aerial insects along the sea wall and a flock of three Little Egrets once again gave the morning a continental feel. As I hinted at before I will be returning here again in the morning for a ringing session. The forecast is for very light southeasterly winds, but with fog. I'll need to check the fog situation first before committing myself to putting up mist nets as most of what I ring will be brought down by playback lures and fog and vis don't go together!
Posted by The Hairy Birder at 20:35